Twenty years ago, Whitehorse, Yukon hosted the 8th International Congress on Circumpolar Health. It was a big event, with participants from countries that ring the Arctic Circle. It was the end of the Cold War and Russia would be coming, too.

It had to be perfect.

The event's organizers needed a ballroom dance band (none of this foolish contemporary "pop" music for them) and, since there were none in the territory, they looked at bringing a band from "Outside". The cost was astronomical, so they approached a local music teacher and asked him if he would be willing to pull a band together. The Congress was willing to pay for forty charts (all the music needed for sixteen musicians), tuxedos for each player, and a substantial payment for each player in exchange for two nights of ballroom music. The Congress saved a small fortune.

For lack of a better name, the group called themselves "The Big Band"; the most northerly big band in the country.

Within four bars of their first song (Glenn Miller's "In the Mood"), the dance floor was packed.

This Friday, please join us as we celebrate twenty years of music, fun, and dance. 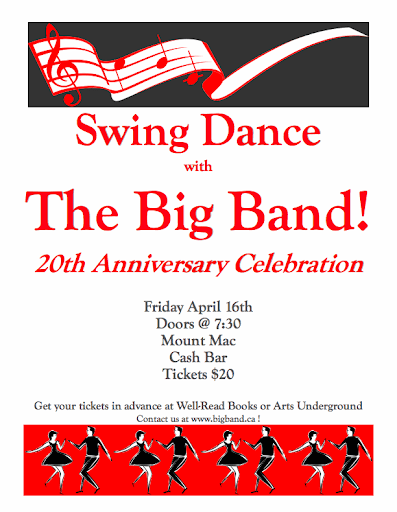 Email ThisBlogThis!Share to TwitterShare to FacebookShare to Pinterest
Topics: The Big Band