As the plane descended, I craned my head to see around the person sitting in the window seat. I was looking for recognizable geographical landmarks on the approach to Old Crow. Spying a large body of water off in the distance and an unusual number of lakes, creeks, and rivers, it didn't take me long to figure out that we were not landing in Old Crow.

My mind raced. Did I doze off and miss our stop in Old Crow? Did I, somehow, get on the wrong flight? The plane was about to touch down and a bunch of large, unfamiliar buildings whizzed by. Where the heck are we?

It was then that I remembered that Air North's Monday flight to Old Crow stops in Inuvik before looping back to Old Crow, Dawson City, and then Whitehorse. 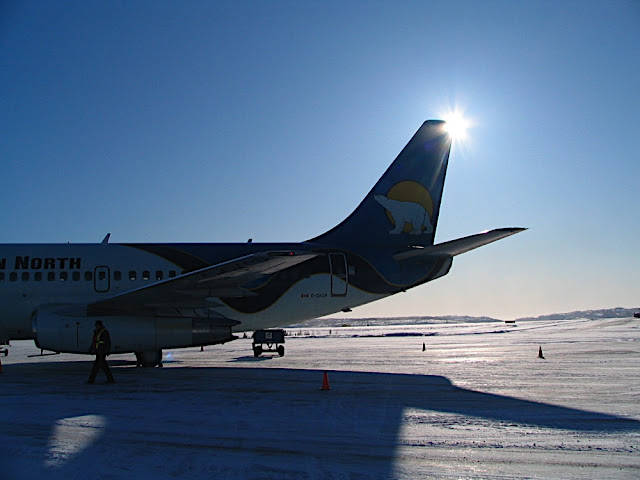 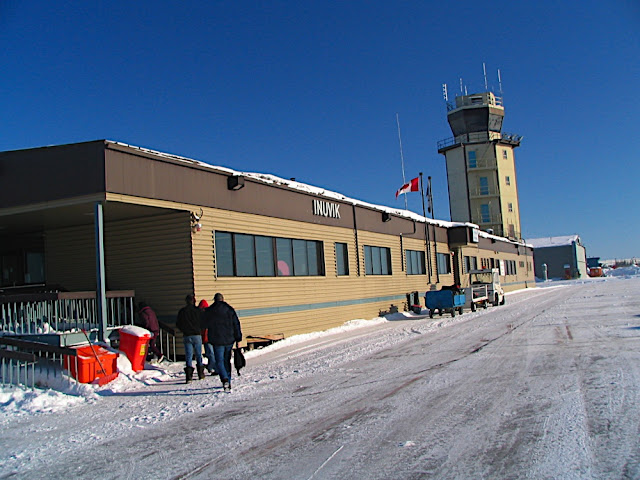 It was a short visit; just enough time for the passengers to disembark, the ramp crew to exchange luggage, the plane to be fueled up, and the passengers boarded for the next leg.

I didn't see anything of Inuvik on our short stay - aside from the airport. I can say I've "been there" but I haven't really been there yet. It was sort of like the traveling equivalent of reaching first base. Maybe not even.

I have no doubt I'll make it to Inuvik for a longer visit someday. In the meantime, I'll keep visiting Inuvik Phil's site, inuvikphotos.ca. When I do make it back, I look forward to taking some more pictures of my own.

Email ThisBlogThis!Share to TwitterShare to FacebookShare to Pinterest
Topics: inuvik

Phil does a great job of showing what Inuvik looks like. It's my daily dose of the community.

You've seen as much of Inuvik as I have. I ended up in the airport there on an Air North flight that couldn't land in Dawson because of ice fog. I can say that I have been in Old Crow too!