A couple of Christmases ago, a friend of ours gave Jade a pair of bob-skates. Shortly after, we set about teaching her to skate. 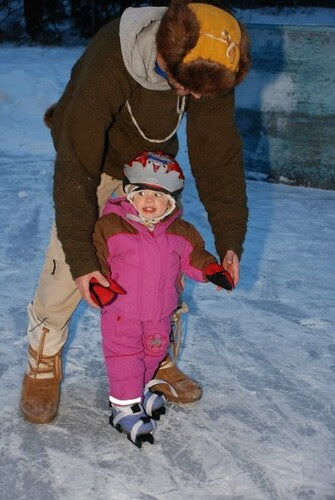 Jade on bob-skates, waaaay back in 2007.
By the next winter, after her seizures started, there wasn't much point in going out skating. The subclinical seizures (and the not-so-subclinical ones) messed up her balance and sent her flying towards the ice. There was too much falling down and we called it quits.

This winter, we tried it again. She took to skating on her bob-skates like she had been doing it all her life. "Jade," I declared, "It's time to get you some big girl skates!"

I still haven't gotten her any big girl skates, but we were out at a birthday party this afternoon and had the opportunity to borrow a pair from a friend. With the big girl skates strapped to her feet, Jade spent a little bit of time using a skating scooter (a metal frame with handlebars that slides along the ice in front of the skater so beginners can keep upright until they get a feel for skating). Before long, she ditched the skating scooter and was skating on her own!

I was flabbergasted at how quickly she took to it!

And wouldn't you know it, I didn't have a camera.

I'm definitely getting her some big girl skates now!

We have come so far.

Remember how easy it was to pick up stuff when you were little? I could ice skate, roller skate all that jazz, now I can barely pick up a pencil correctly! You really can't teach an old dog new tricks or ask the old dog to do something that was easy for him to do 30 years ago.