We were in Vancouver last week for a series of hospital appointments.

Over the Christmas holidays, we knew there was something wrong with Jade. She wasn't eating well (even by ketogenic diet standards), she was throwing up, she was sometimes lethargic, very whiny, pale, and her lips would turn a strange, deep blue colour.

Bloodwork revealed that her liver was failing.

Acting fast, the keto team decided we should take some stress off her liver. The ketogenic diet is hard on the liver as it is, so we reduced her fat ratio from 5:1 to 4:1. That's a huge drop. 4:1 is where we started. That night, heard her have a seizure. It was the first one we'd heard in a wonderfully long time.

Near-daily draws of blood showed that the change was working. Her liver was improving, but we were worried. She was definitely having seizures on the 4:1 ratio. Could we go back to 5:1? Would we be forced to choose between her liver and her brain?

With Jade's epilepsy, seizures can mean cognitive impairment. But what good is having good cognitive functions if you don't have a liver to keep things going?

Our first appointment in Vancouver was for an abdominal ultrasound (after having more blood drawn). Over-tired from the travel, Jade screamed through most of it. I don't think she liked the way it tickled her sides.

The next day, we hooked her up for her first-ever ambulatory EEG. Before the liver stuff, we were thrilled that she was having a 24-hour EEG. With her typical EEG appointment, they require sleep deprivation, which makes seizures more likely to happen (Odd that we would try to trigger seizures when what we really want to do is prevent them from happening, eh?). With the 24-hour ambulatory EEG, we were hoping to see what Jade's brain would be like under more normal circumstances. Unfortunately, down on the 4:1 ratio, we weren't going to get to see that after all. Still, the ambulatory EEG would be enlightening.

As with any EEG, it all starts off with a head measuring and marking, the application of adhesive and conductive paste, a little bit of tape here and there, and a fancy little net to keep it all from getting knocked off. 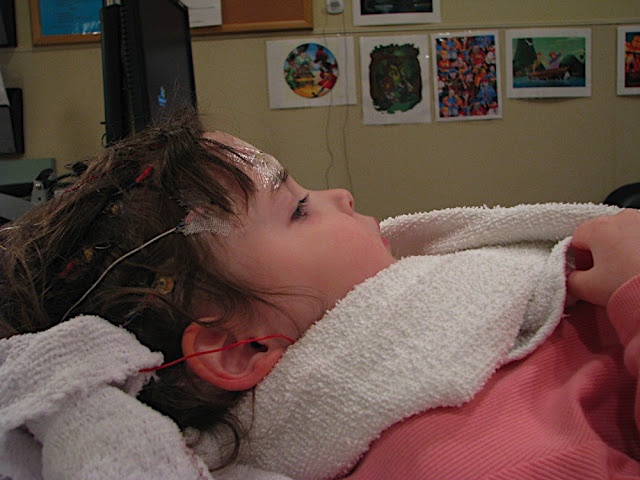 The ambulatory EEG uses a self-contained battery-powered unit that fits conveniently into a child-sized backpack. Although it was disconcerting to sign the form saying that I take full responsibility (financial and otherwise) for the $16,000 unit, it was heartwarming to see how well Jade liked wearing the purple backpack. For most of the day, she was Dora the Explorer. 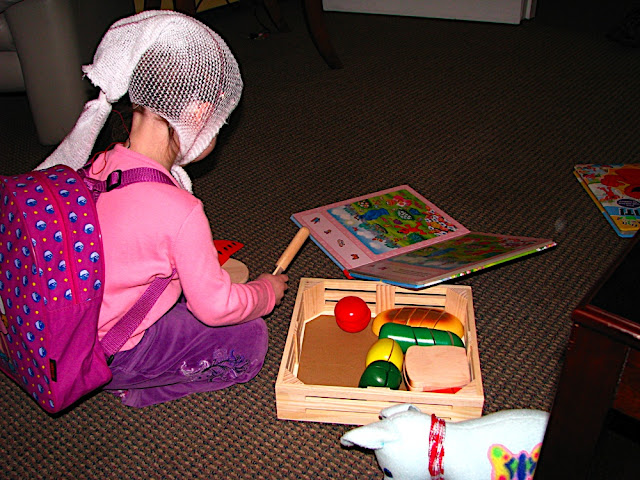 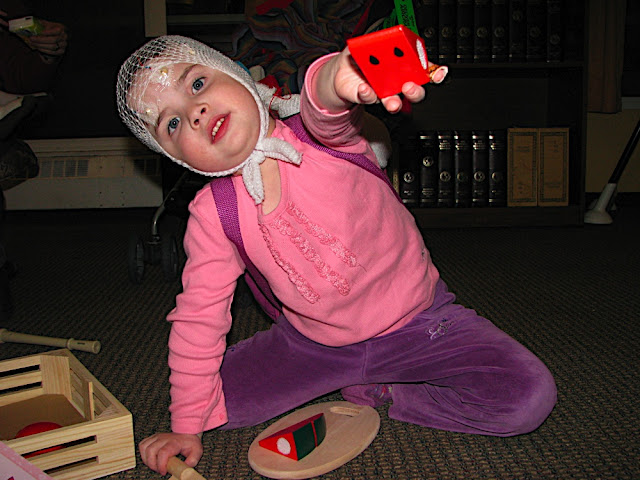 Some watermelon for her latest adventure.

Jade was great about not messing with the attachments and making sure that her heavy little backpack stayed near enough that the wires didn't get tugged out. The next day, we were back at the hospital to get the whole thing removed. With the seemingly non-stop Vancouver rain, keeping everything dry was a bit of a challenge, but we succeeded. 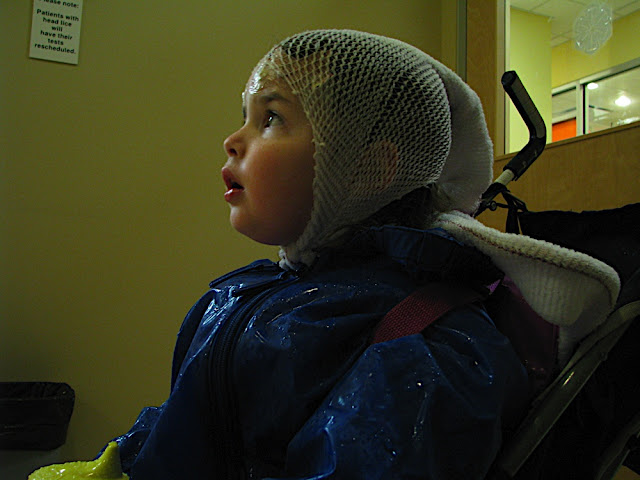 The solvent to remove the goop smelled and, in spite of our efforts, a little bit got into Jade's eye. Fortunately, she recovered quickly and before long she was disconnected, shampooed, dried, and ready to go. 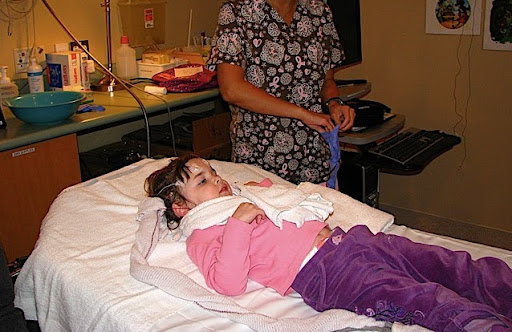 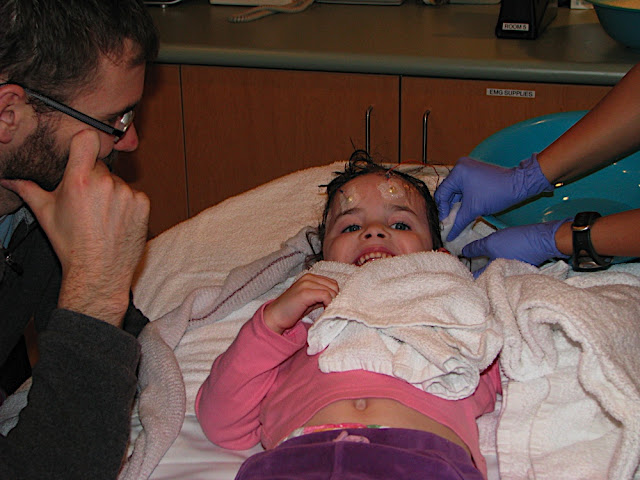 The day after that was our appointment with the keto team. Although we didn't speak about it much, I think it's safe to say that Fawn and I were both preparing for disappointment.

The look on the epileptologist's face didn't belie any disappointment, though! She seemed thrilled with the progress. Her liver? We'll take blood every week and monitor. When things are back to normal (as normal as they get for the ketogenic diet, anyway), Jade will go back onto the 5:1 ratio. They suspect it was a virus. Another keto kid had the same problem around the same time. They're going to do ultrasounds of the keto kids more often, just to get a baseline of what's "normal" for a child on the ketogenic diet. Jade's liver was "fatty", which is to be expected of someone on a high fat diet. Also, the ultrasound showed no sign of kidney stones or the sludge that would indicate the growth of kidney stones (a typical side-effect of the ketogenic diet).

Her EEG results? Absolutely no seizures during the day, subclinical (hidden) or otherwise. None whatsoever. She had only two during the nighttime. None during her nap.

What does it all amount to? We had one setback, but have made many, many steps forward.

And we're going to keep moving that way.

Sorry to hear about the step back, but overall, that's great news! No seizures is very exciting!

Thanks for the update. Glad to hear that overall there was some very good news!
Christiane