As you may recall, I drove down to Edmonton the other week for a conference. I didn't take a single picture on the way down, driving the entire way stopping only for food, fuel, and sleep. I was well on my way to doing the same for the return trip, but when I caught a feeling of sleepiness creeping in, I knew it was time to stop, stretch my legs, and get some fresh air. That would reinvigorate me. There were animals hiding behind hills and curves all along the road, necessitating frequent braking. I needed to be at my most alert - for their sakes and mine. 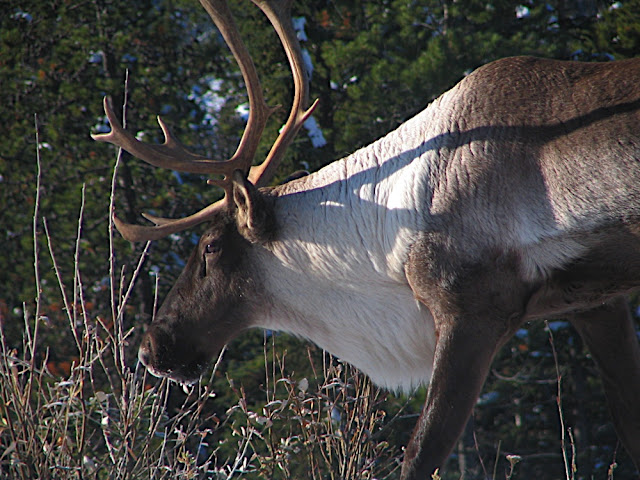 Hey! Isn't he that caribou from the quarter? (A question for those of my readers who use/have used Canadian currency.) 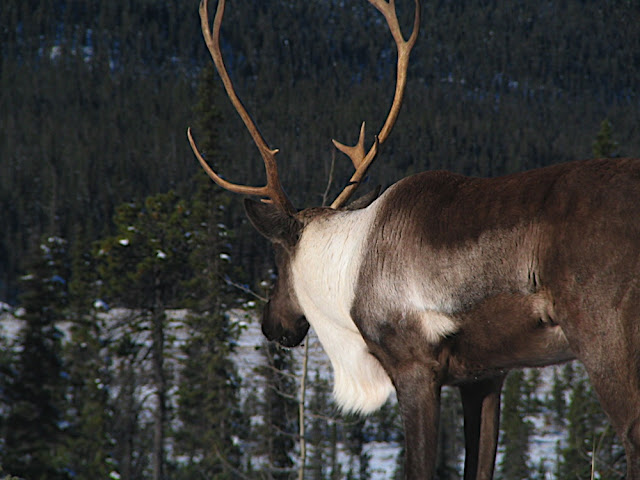 A luxurious winter coat.
The timing of my sleepiness couldn't have been better. I was near beautiful Muncho Lake in Northern BC. Every time I drive through this area, I look around and think I want to go hiking there! And there! And there!

Alas, I shall never have the time to do all the hiking I would like to do. Usually, I must resign myself to the fact that I have responsibilities and commitments that come first.

But now the opportunity to go for a hike presented itself so that I had no choice but to go and stretch my legs. It was a safety thing. For me and the animals.

I parked at a road-side pull-out at one of the larger alluvial fans along the lake. How many times have I longingly looked up the seemingly dry creek bed, wanting to explore its upper reaches? How many times have I pursed my lips and driven by, hoping to return another day? I've lost count.

Opportunity is a funny thing. Conventional wisdom states that opportunity comes only once: You either seize it or miss it. I am learning, though, that when the timing isn't quite right, it pays to be patient and let the occasional opportunity slip away. By doing so, you're giving the opportunity the chance to present itself again when you're really ready (I get the feeling that opportunities don't like rejection). Preparedness is what makes the difference between a good opportunity and a great one.

And here I was, prepared to go for a hike, and therefore presented with a great opportunity. I would finally get to hike up a valley that I have long desired to explore. 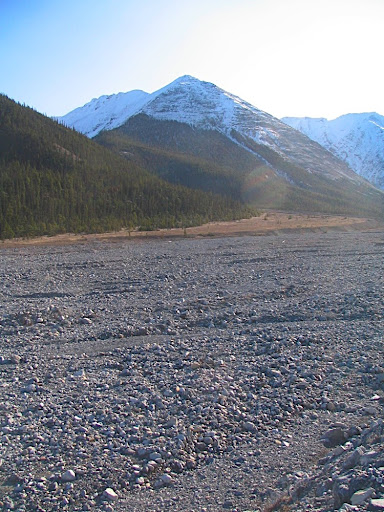 An alluring alluvial fan.
The air was cool but the sun was warm. I began trotting across the fan towards the higher ground on the left side of the valley.

Sometimes, it's hard to get a sense of scale in the open places in mountain country. It's hard to gauge how big something is when you don't have a point of reference. Sure, there are trees, but just how big are those trees off in the distance? Having no sense of time contributes to this phenomenon. Knowing how long it takes to get from A to B gives us a sense of scale.

The walking was brisk and it felt like no time at all before I was across the fan, but I really have no idea how long it took. I wasn't wearing a watch and felt no sense of time. It's a wonderful feeling. 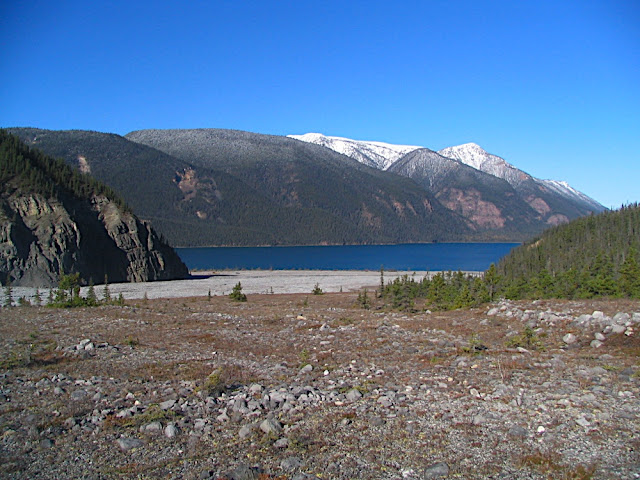 Looking back across the fan towards Muncho Lake, trying to get a sense of scale. Can you see my car? (Click to enlarge.) 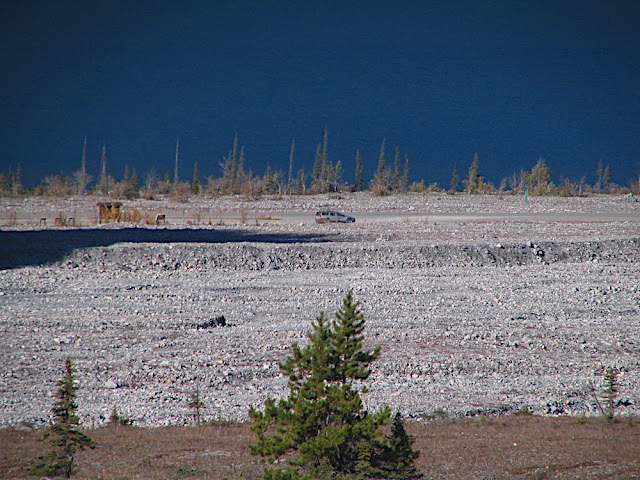 There it is!
I was enjoying the sunshine and decided to follow the left fork up the valley, where the sun was shining the strongest. A creek was burbling down over the rocks, creating ice sculptures as it froze along the way. I didn't recall hearing or crossing a creek when I crossed the alluvial fan, so it must go deep under the rocks at some point. Although I was intrigued by the disappearing creek, I was more intrigued by the valley. I continued upwards.

During the summer, the creek would have been more difficult to cross - if not impossible - because of the melt-waters from the surrounding mountains. I knew I was lucky that this opportunity had come when it did. 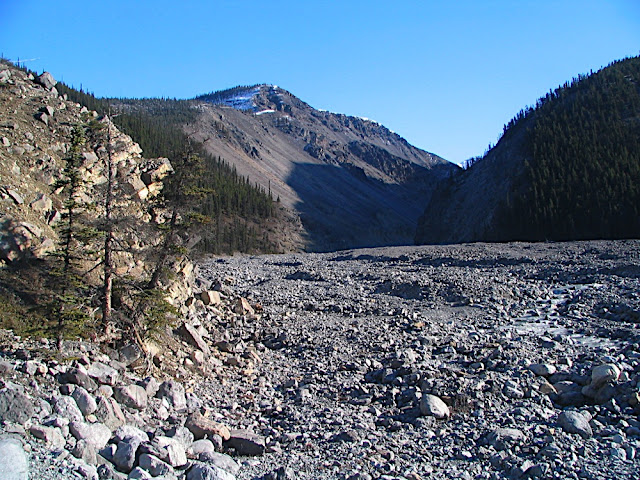 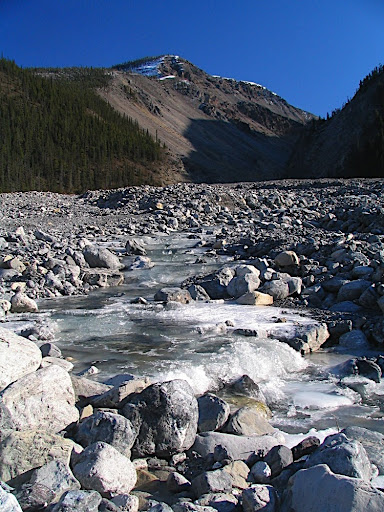 Freezing-up.
Looking further up where the valley narrowed, dark shadows cast a mysterious gloom. I could see some unusual shapes and wanted to investigate. The air went suddenly cold as I stepped out of the sunlight and into the shadow. A cold breeze drifted down the valley from the snow-capped peaks beyond. Out of the sun, I could now see that I was standing in the Valley of the Hoodoos. 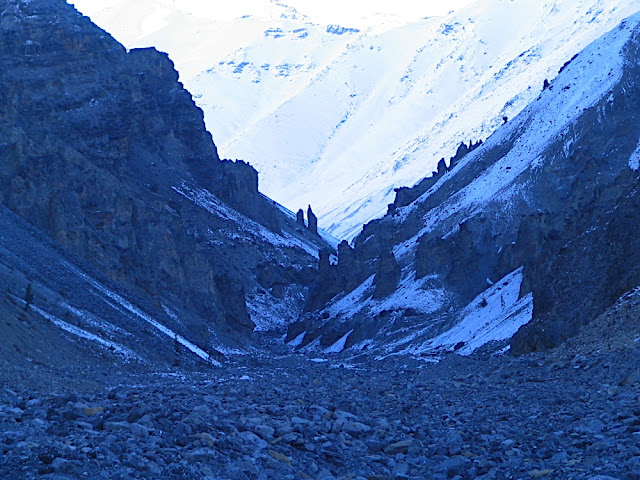 Valley of the hoodoos.
It felt like I was stepping into a science fiction movie, lost on a dark, alien planet. 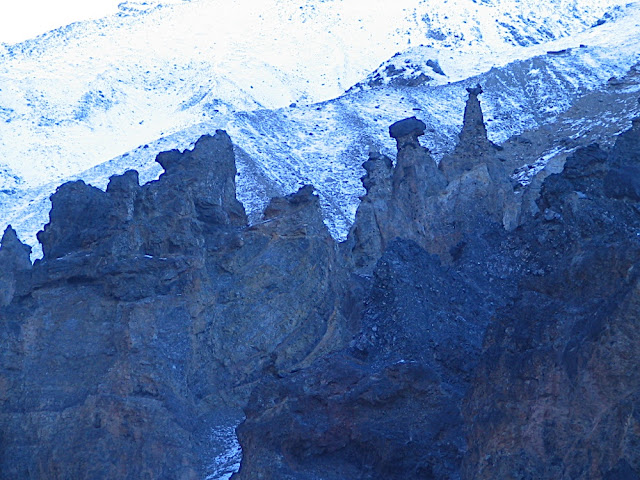 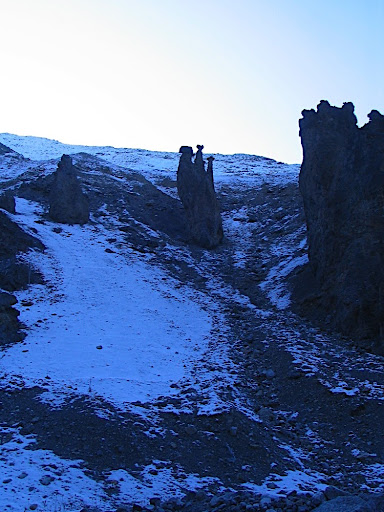 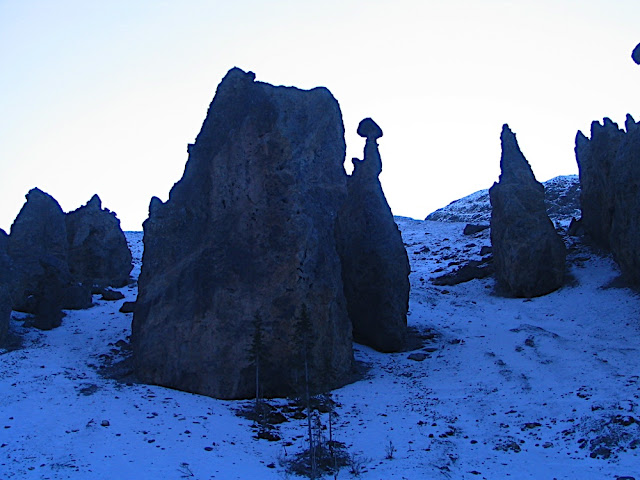 Like something out of Star Wars. Except for the trees. Those hoodoos are big! 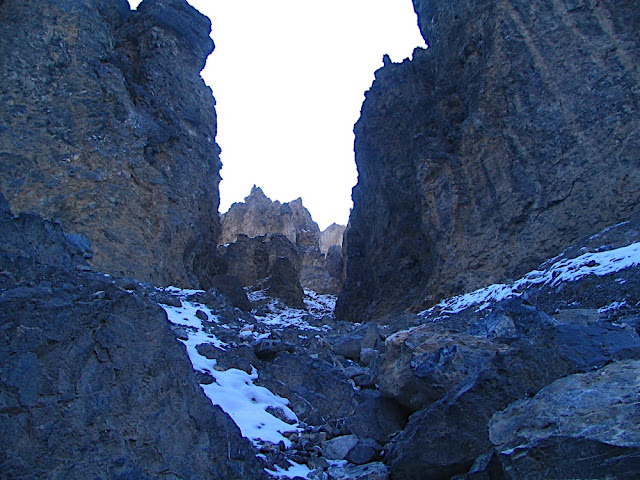 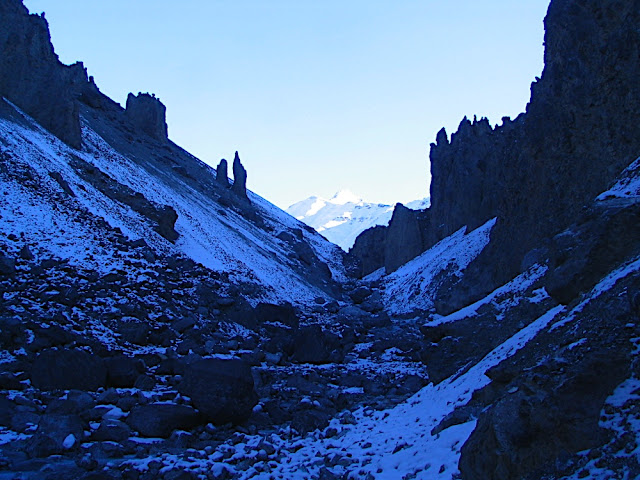 More to explore.
After skirting a small waterfall, I knew that I would soon have to turn back. The rocks were now covered with snow. This would not be a good place to injure myself, I reasoned. The narrowing valley presented another danger. Hearing a loud cracking sound, I looked up the large talus slope on the left side of the valley. A cloud of rock dust drifted from behind a large boulder as a watermelon-sized rock ricocheted off and flew down the slope. As it rolled, it knocked more rocks loose, each of which triggered more flying rocks. They were flying down the slope, leaping with high arcs. With the speed that they were flying, even the smallest of the rocks could cause serious harm.

While I was slightly higher than the projected course of the rocky missiles, I didn't want to take any chances. After I saw the first large stone, I started scrambling for higher ground. When I knew I was safe, I looked back. The rocks were flying across the creek bed and up the opposite slope - where I had been walking just minutes before.

I stared up the talus slope, looking for what might have triggered the first rock. Nothing moved.

Looking towards the upper reaches of the valley and suspecting that the risk of dangerous flying rock slides only increased, I saw the situation as an opportune time to start heading back. I turned around and carefully made my way back down the valley. 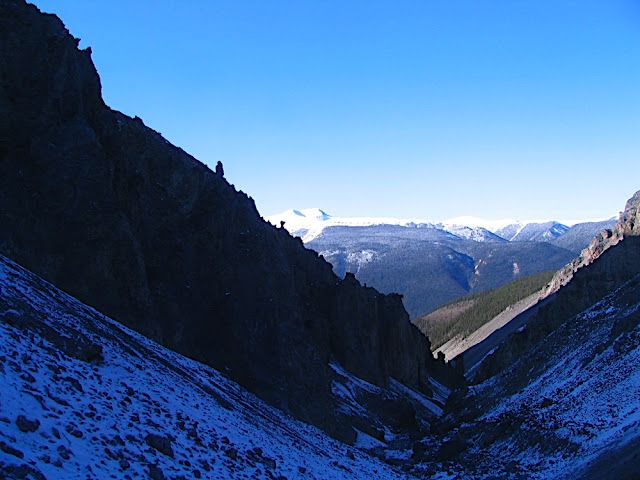 Time to turn around.
As I made my way back to the car, refreshed and invigorated, I thought about the valley, savouring the views and wanting to explore more. What did it look like over that last rise? Over the peak of the mountain at the end of the valley? What is it like to be up and among the hoodoos. I wondered, will I get the opportunity to go back?

I'll just have to wait and see. The opportunity may choose to present itself again - when the timing is right. 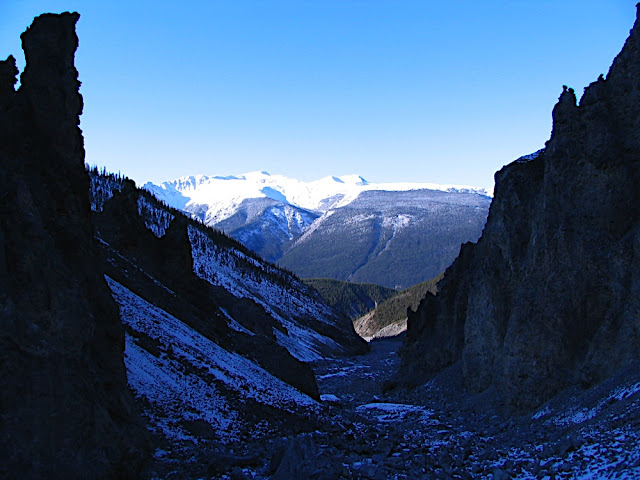 Waiting for the next opportunity.

Michael I am glad you took the opportunity that was presented you and I am glad that you took us along for the hike. I love this area of BC/Yukon, I have also driven this highway many times with the promise to stop the "next" time!
Have a wonderful weekend.
Smiles

It sounds to me like you're going to be back one of these days/years, so you may get your opportunity yet! :)

Micheal...thanks for sharing these photos. I live in Edmonton but have not had the opportunity for this drive but would like to some day!