I recently drove from Whitehorse to Edmonton (and back) for a conference. It's a 2,000 km drive each way so I needed to stop somewhere to get some sleep. Because I'm self-employed and "thrifty", I would normally save money by sleeping in the back of my car (one of the many advantages of owning a station wagon). This time, however, the back of the car was filled by a defective mattress that I was returning to the retailer. The mattress didn't leave any room for sleeping. How's that for irony?

My dad once told me that, if you want to find the inexpensive but good restaurants, look for the ones that have a bunch of old people in them. I owe a lot to the generation that lived through the Great Depression. Their frugality saved me a small fortune on bad and over-priced restaurant food. Too bad there aren't many of them dining at restaurants anymore.

I mention the restaurateurs because, after fifteen hours of driving, I needed to get some sleep. Having developed my own rule, I pulled into a motel that looked simultaneously busy and run-down. You can always count on an old, run-down motel if its parking lot is filled with work trucks. It will be both clean and inexpensive.

I really enjoy this type of motel for two reasons: Firstly, they're relatively inexpensive. Secondly, they're like the underdog of the overnight accommodations world and I love rooting for the underdog. Sure, you don't get the latest in hotel interior design. Sure, the furniture is old and maybe there are rust stains in the sink and bathtub. Sure, the carpet might be from the 1960s, but how much do you want to pay for a newer carpet if you're only staying for a night?

I enjoy the quirky near-antiqued interior design that I've never seen anywhere but a cheap motel. I also enjoy the (almost always) comfy bed and gushing shower, powerful enough to strip the enamel off of teeth should anyone be reckless enough to open their mouth under its fire-hose-like force.

But it's really the interior design that distinguishes the cheap motel. No graduate of interior design studies could possibly duplicate the interior of an inexpensive motel. It's because inexpensive motel rooms are continuously evolving works of art. It's because inexpensive motel rooms are like improvisational jazz. It's hard to match tiles from the 70s with lamps from the 80s with furniture from the 90s. You just can't just rush out to your local furnishing stores and get this stuff; it must be acquired over decades and added on the fly.

Want to see what I'm talking about? Take your first lesson from the Cheap Motel School of Interior Design and check this out: 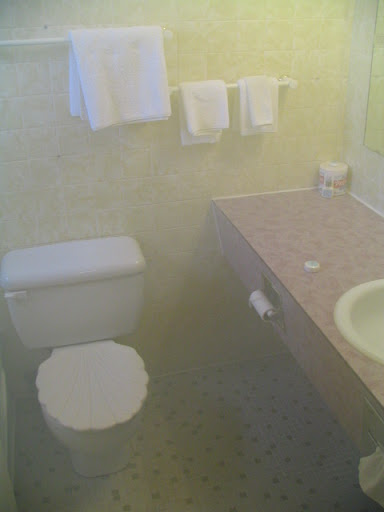 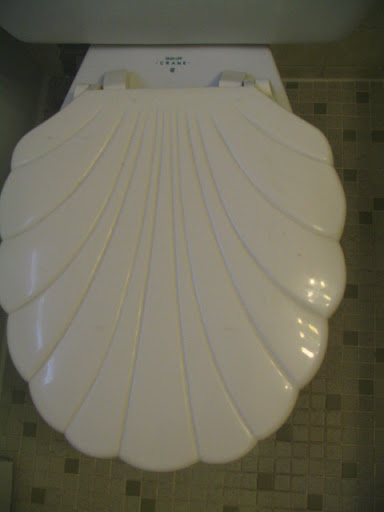 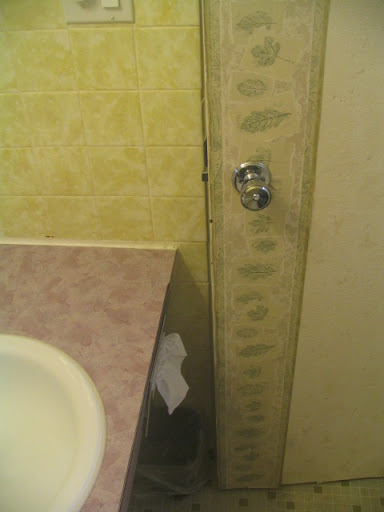 The yellow on the wall tiles and pink on the counter top show up really nicely when paired with the greenish wallpaper strip on the door. Yes, there is a strip of wallpaper on the door. 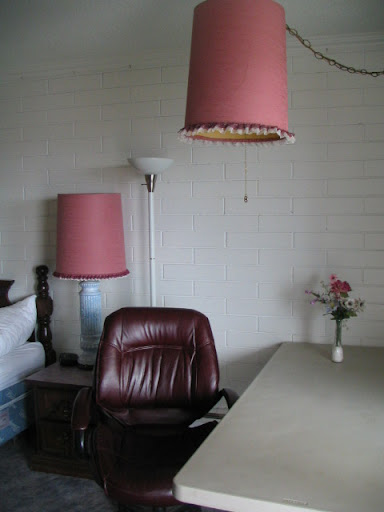 White cement-block walls, a vase full of artificial flowers, large, pinkish lampshades, one of which is on a baby-blue lamp, and a maroon pleather chair in front of a plastic collapsible table that acts as a desk speaks of motel with class. In fact, when I checked in, the night manager told me through his thick Japanese accent, "Oh, you have the best room here. It has a desk!" 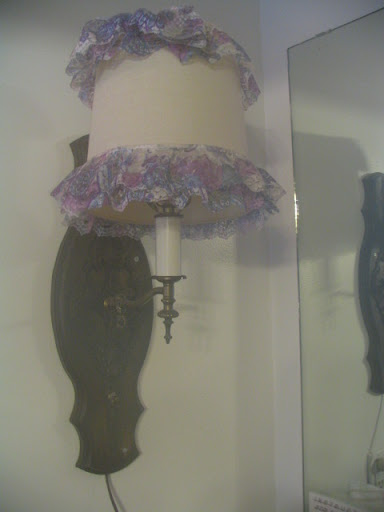 When you see a lampshade like this, what do you want to do more? Turn on the light? Or take of the lampshade and wear it like a dress? 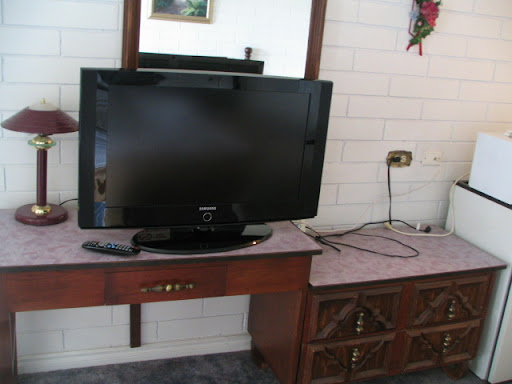 The decor may not get the overhaul it needs, but priorities are priorities. How else could they afford such a sweet TV? Too bad the wiring was done in such a way that you had to choose between any two of the lamp, fridge, microwave, or TV.

It old but obviously the owners have pride in it. I think those lamp shade are made for partying! You know the old lamp shade on the head drunk.
This hotel room looks way nicer and more updated than the room we got in Virginia Beach, right on the ocean in 2007, and I bet this room cost you less than $200/night!

A lampshade makeover is needed in a big way! ;)