Touristicus beringiae are frequently sighted in packs, but have been known to travel in small groups or even on their own. Of those that travel in packs, they are typically observed huddled together, around an alpha human known as the "tour guide". 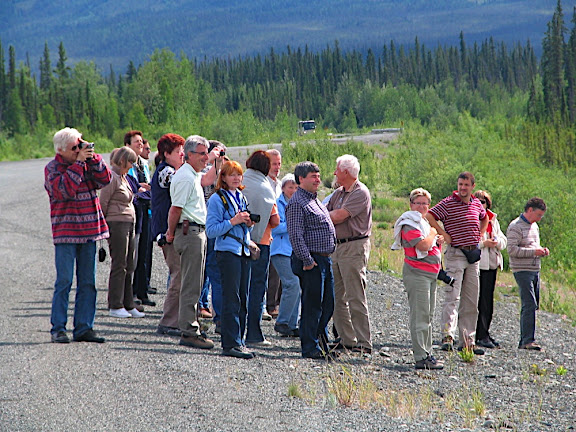 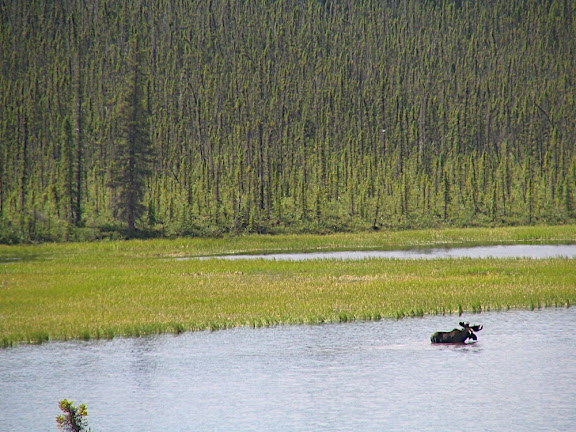 This group of touristicus beringiae has stopped along their migration path to chatter over an Alces alces gigas.
During the animal observation ritual, touristicus beringiae will raise black or silver boxes to their eyes. While this ritual makes it difficult to see the object of their attention, biologists have discovered that helps with toursticus beringae's memory recall.
It is exceptionally rare to see touristicus beringiae more than 300 metres from their transportation device.  They appear to enjoy the wilderness, but only from the apparent safety of an urban environment.  For this reason, they will not stray off of the paved and gravel surfaces along the highway. 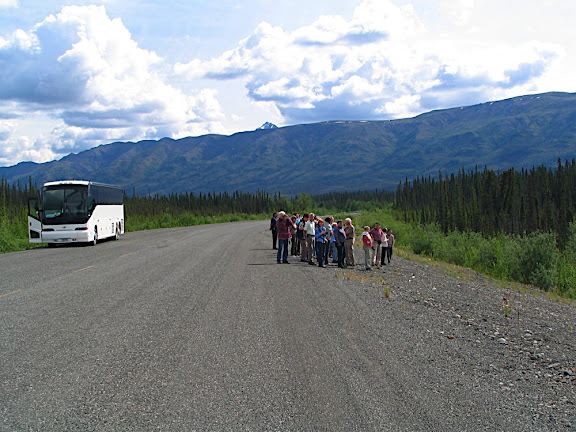 Huddled in a small group, emitting an excited chatter. Touristicus beringiae are seldom found further than a few hundred metres from their transportation device.
At night, this flock of touristicus beringiae will nest in the tiny rooms at the Beaver Creek Westmark before continuing with their northern migration.

Oh Michael, thanks for my morning laugh...couldn't have said it better. Have a great summer and thanks for sharing.
Smiles

Yes God forbid they leave the gravel and do damage to the environment. Is that a biodiesel bus?? I noted a "fanny pack" nothing says tourist like a man wearing a fanny pack.
Be glad you're not here. Hot air balloon festival. Lots of people driving curving roads they don't know looking up as hot air balloons slowly float along, while driving.

my own personal favourites though are the octogenarian Texans in the rolling apartment blocks travelling in herds with the alpha leader replete with bright orange vests and numbers plastered to their windshields who must have a lemming like urge to "go on up to 'laska" before they die. We have risked life and limb passing them after Dawson City before they head into "those thar hills"

One chirped to me one day "we only stop for gas, brought everything else with us"