Right now, I'm in Beaver Creek, Yukon - Canada's most westerly community. It was a lot colder and snowier the first time I was here, and there seemed to be a lot more Ravens.

It's nice here. From the window of my hotel room, I can see the comings and goings of Alaska Highway travelers and watch the storm clouds rumbling by.

Yesterday, I participated in a Career Fair. It was great to see so many of the community members at the fair and it was fun to meet so many of them. After the fair was over, we were treated to some singing, drumming, and a little bit of dancing. 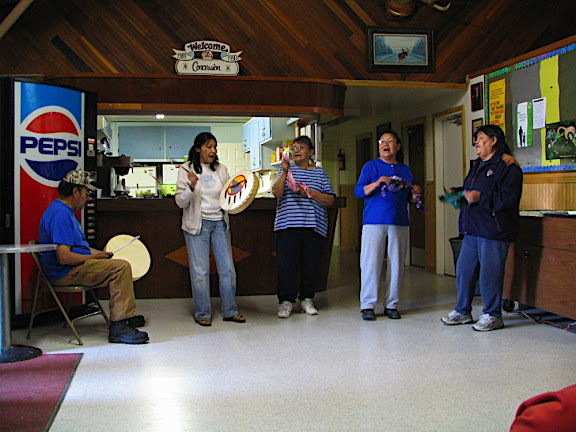 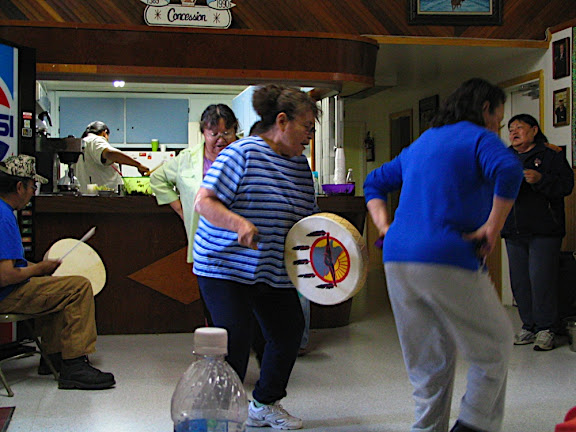 Dancing
And now in moving pictures.
After the singing and drumming, there was a tour at the Arcom North archaeology site, where they are uncovering a very old and very plentiful habitation site. I won't make any claims about the site, which I may have remembered incorrectly, but I think it's safe to say that they're finding some of the oldest evidence of human habitation in northern North America.

The site sits on a bluff, overlooking a broad valley, not far from a small river. The site would have been an excellent place to watch game moving through the valley. 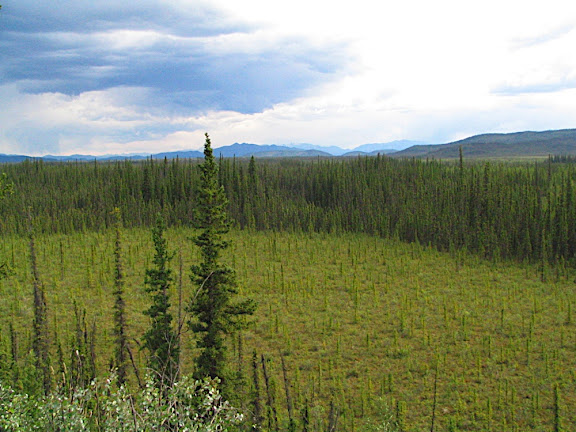 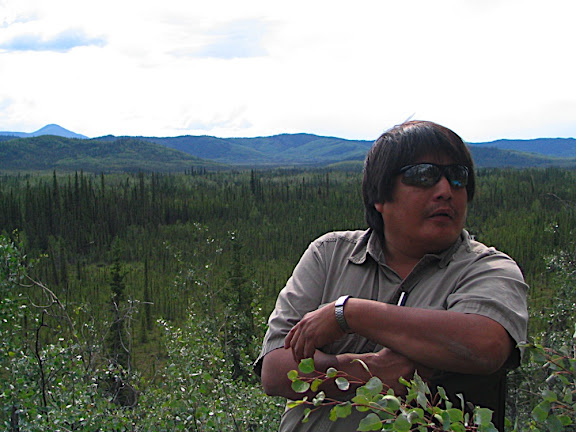 Doug takes a break from watching for game. 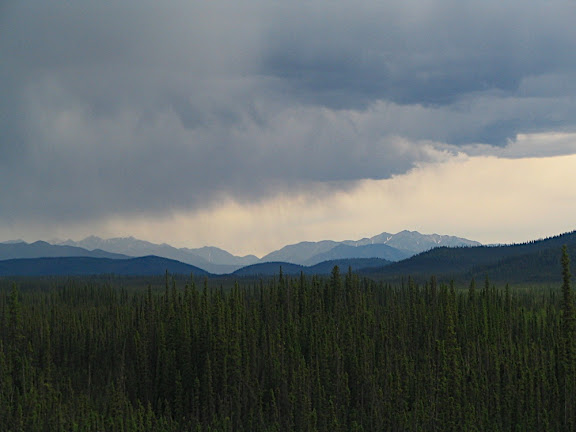 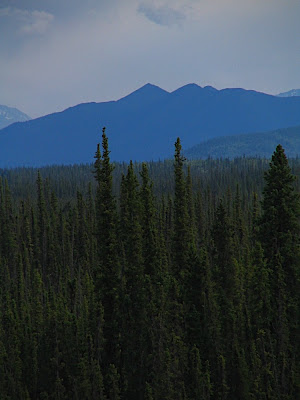 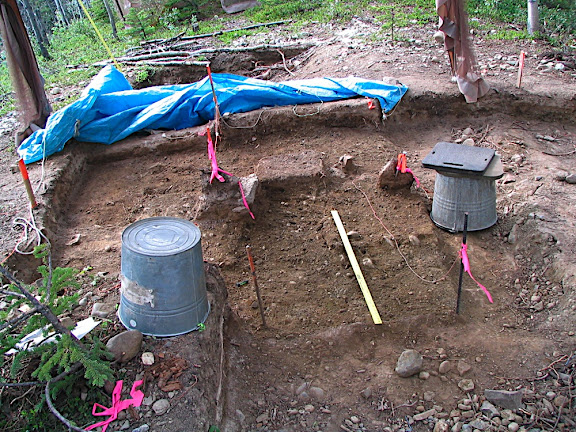 One of the dig sites. 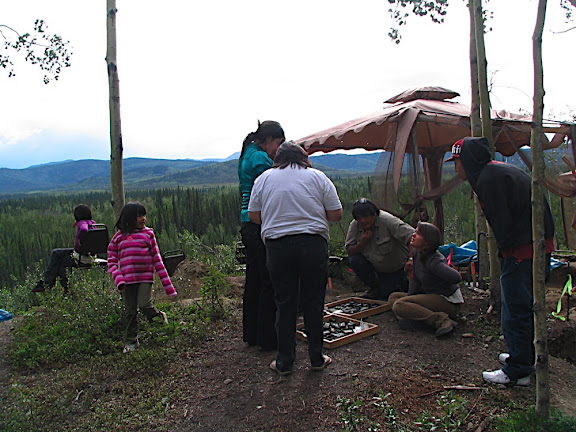 One of the student archaeologists shows some of the finds (scrapers, projectile points, bone shards, and knapping tools) to Beaver Creek community members. 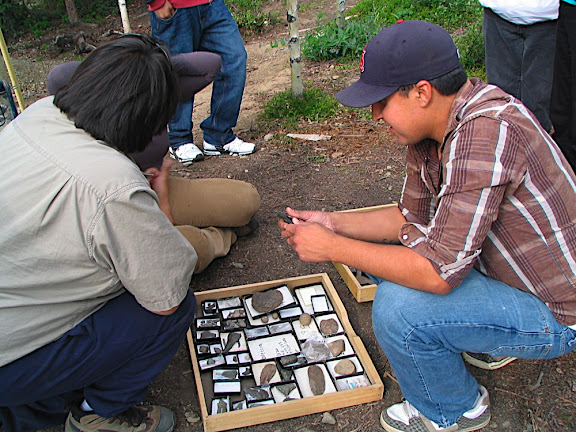 Taking a closer look.
According to our hosts, there was a variety of skill levels and styles demonstrated in the tools and projectile points, indicating that the site was more than just a hunting look-out, but a longer-term habitation site where people (likely youth) practiced their knapping abilities.

Obsidian was valuable, because it was relatively easy to knap and could produce better-than-razor-sharp tools. Obsidian can be matched with its place of origin and some obsidian tools have been found over a thousand kilometers from the obsidian source. The interesting thing about the obsidian tools found at the Arcom site is that the obsidian is from a mountain just sixty kilometres away, but the obsidian hasn't turned up outside of the immediate area (i.e. this source doesn't appear to have been been traded). Perhaps the site was a closely guarded secret? Perhaps there was something else going on? 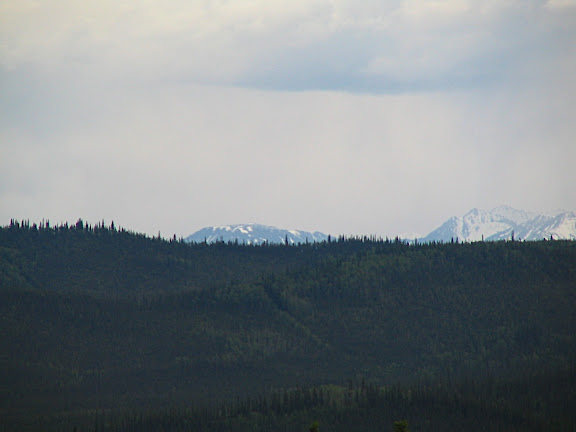 The obsidian came from the lower mountain on the left. It's only a quick 60 km walk.
After the tour, we visited with our hosts, sitting around the campfire, drinking tea, and learning more about what it's like to live at an archaeology camp. They were lamenting that they were out of bread, so I asked for a few ingredients and showed them how to make something even better. 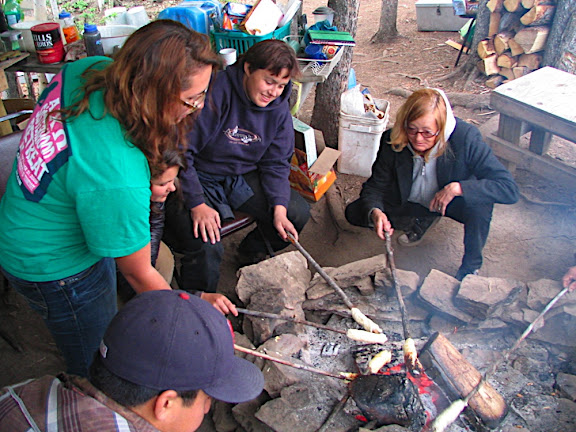 Beaver Creek isn't a big place, but there's a lot going on!