A walk up Crow Mountain.

While I was in Old Crow, I heard about the road that leads up to the quarry on Crow Mountain. Of course, I just had to walk up there.

Before I left, I told an RCMP officer my plans and asked him about bear spray. It is springtime (when bears are hungry) and I would be walking in an area where I didn't know the bear situation. The RCMP officer and a lands and resources person who works for the Vuntut Gwitchin First Nation assured me I wouldn't need it, but only after a bit of playful teasing. Their assurances were good enough for me, so I set out in the late evening, armed with my camera and an extra sweater. 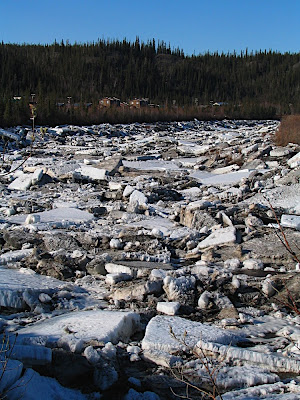 A big bed of ice, lining the Crow River.
Just past the subdivision, as the road begins its ascent, I saw the RCMP officer again. He was driving his truck down the road. He stopped to tell me that it was 5.5km to the quarry. Secretly, I wondered if he hadn't driven someone up there to pretend to be a bear. 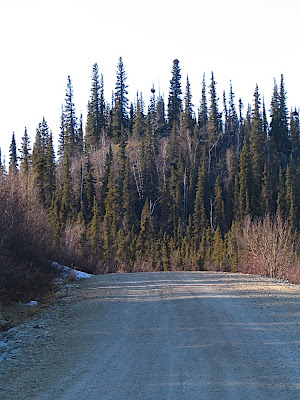 The climb begins.
I passed a team of dogs as they were getting fed and a creek that was running amber from all of the tannins it collected on its way down the slope. 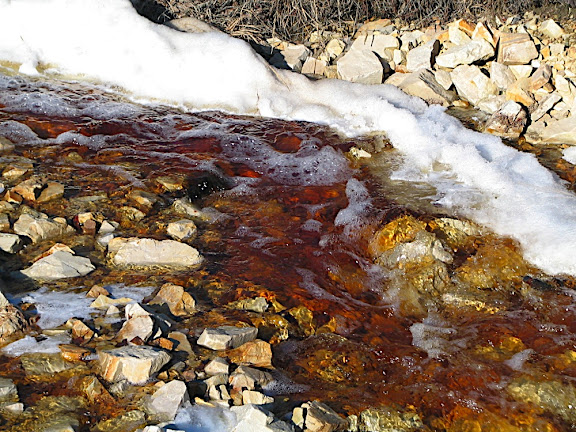 On the steady climb upwards, I got better and better views of the top of the mountain. 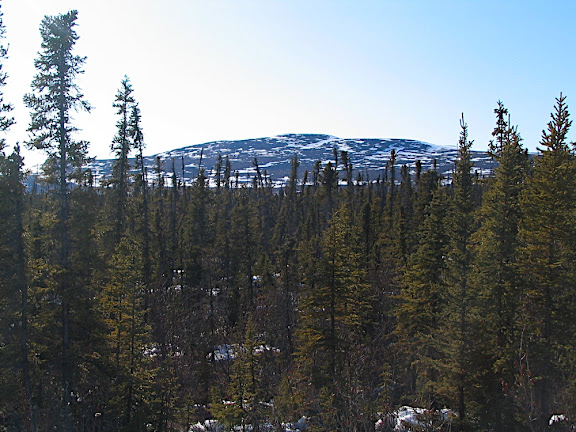 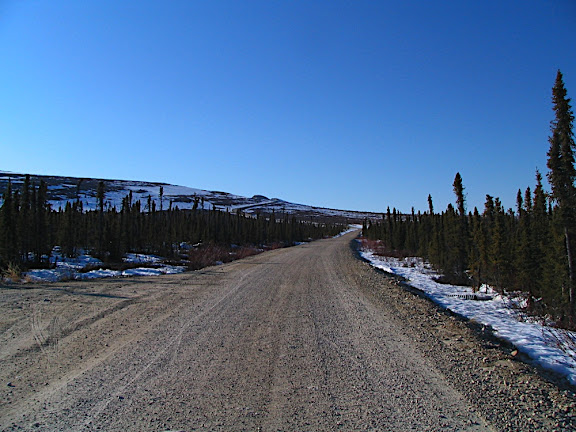 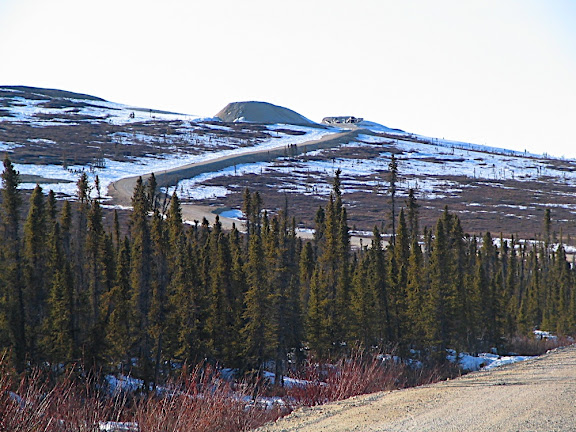 I also got better and better views of the land surrounding Old Crow. 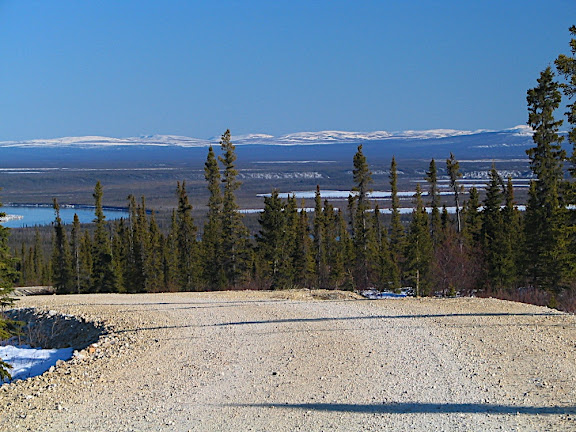 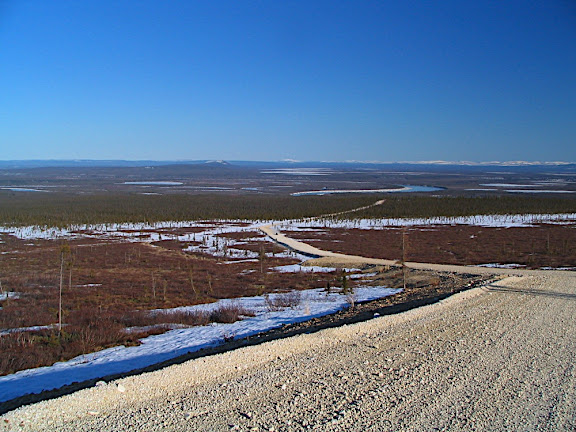 Do you see the guy on the 4-wheeler? 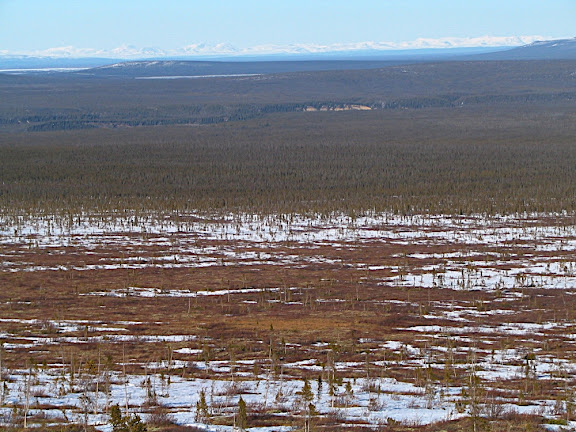 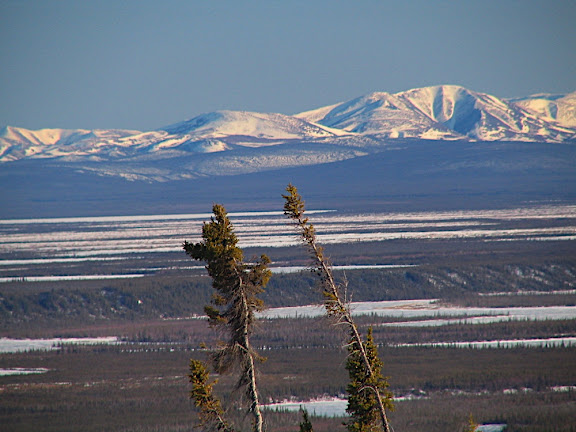 Eventually, I made it to the quarry. The quarry wasn't anything spectacular, but the view was. I decided to keep going. I passed a snowmachine and homemade toboggan and walked past the end of the road, following the four-wheeler and snowmachine tracks over the wind-packed snow. 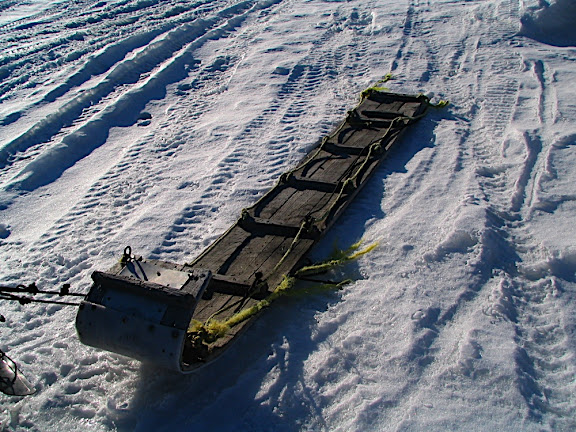 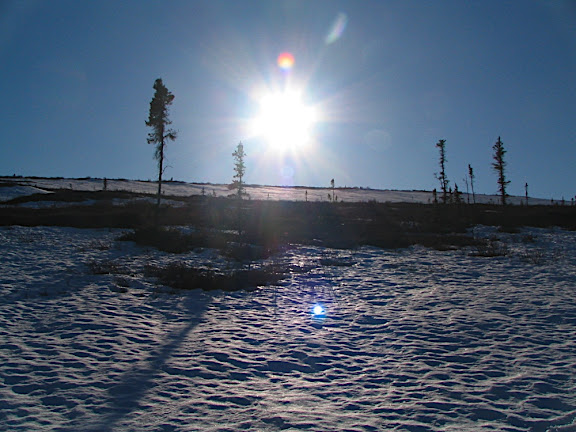 The late-evening sun. In a couple of hours, it would become the midnight sun. 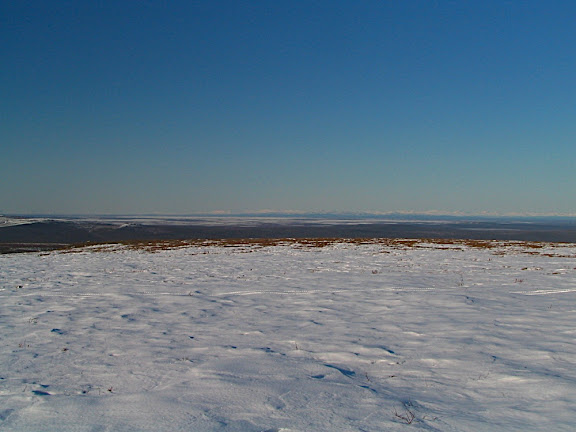 Wind-packed snow.
The trail forked and I had the option of walking to Crow Flats or continuing up the summit. Without any supplies on-hand, I figured it would be best to continue up the mountain and save a walk to Crow Flats for another trip. 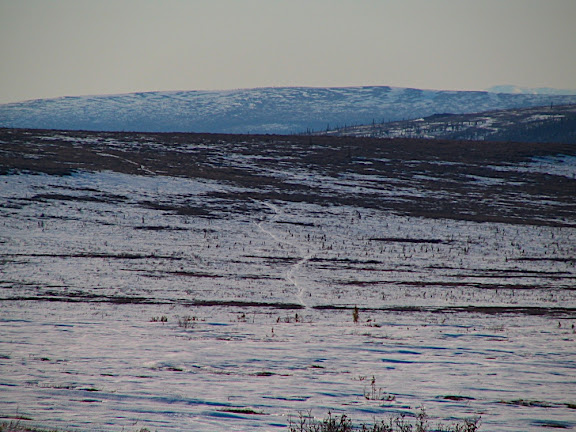 The trail to Crow Flats.
The snow was hard and the walking was easy. I walked around the north side of Crow Mountain, enjoying the views of Second Mountain behind it. Eventually, I bee-lined for the top, walking over alternating patches of snow and exposed ground. 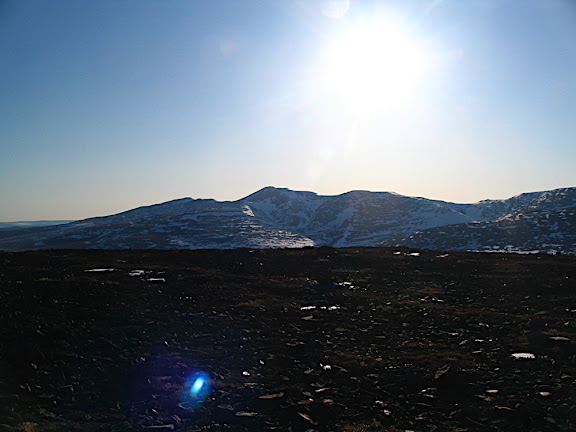 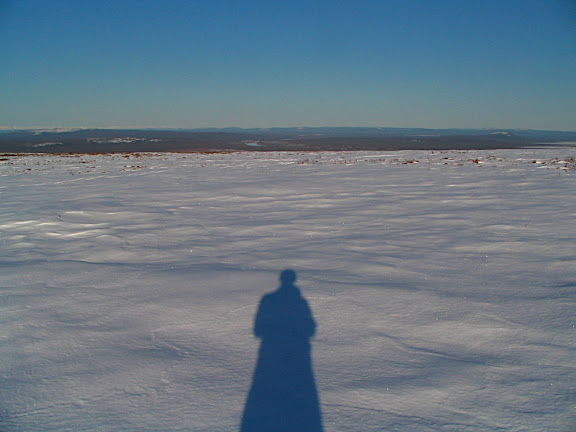 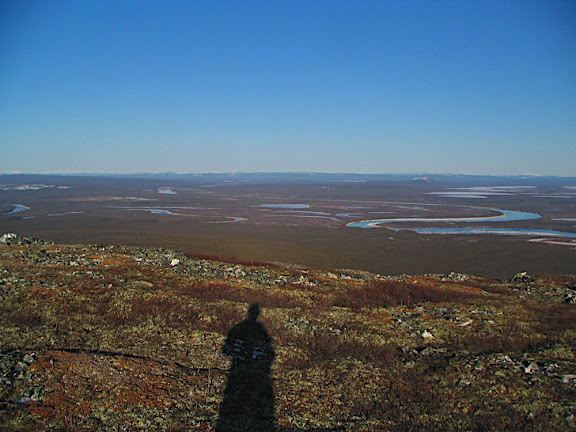 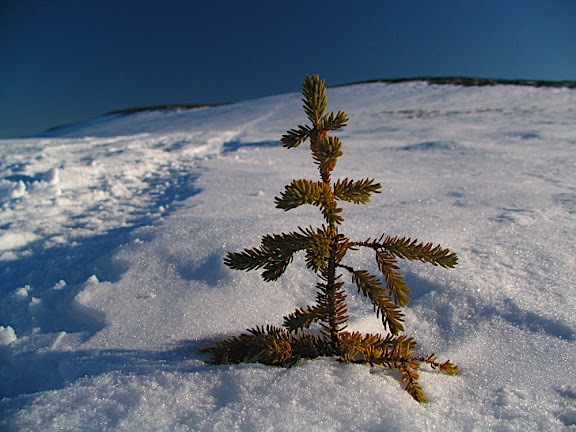 The last tree I passed before I bee-lined to the summit.

As I neared the summit, I noticed a ring of rocks. I couldn't tell how old it was, but it didn't look recent. For all I know, the rink could be ten years old or ten thousand years old. Was it built by hunters for shelter while they sat look-out for herds of caribou? I'll have to ask the next time I'm in Old Crow. 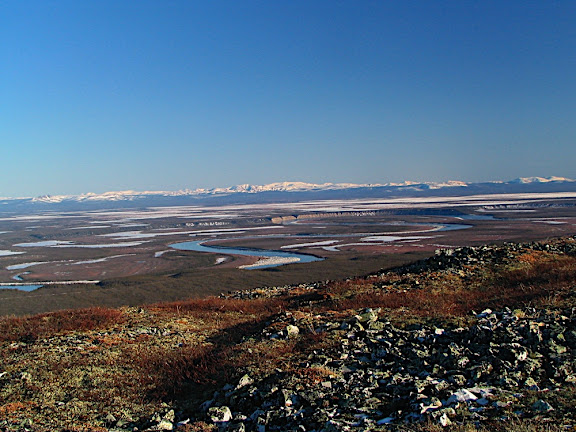 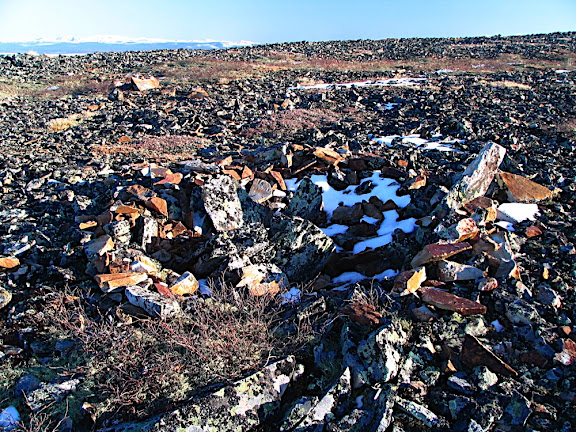 Tent ring?
I'm not a huge fan of the Yukon's "Larger than life" slogan, but from the summit of Crow Mountain, the immensity of he landscape was mind boggling. 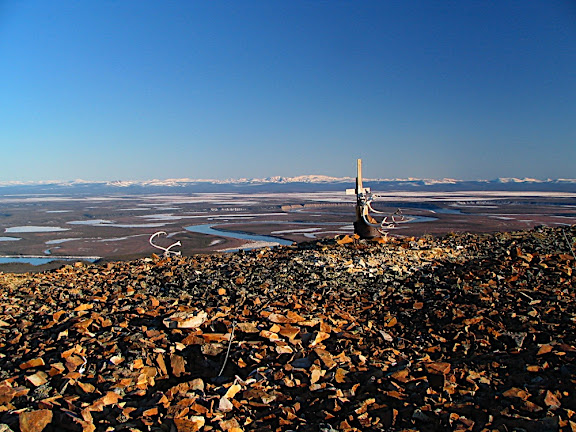 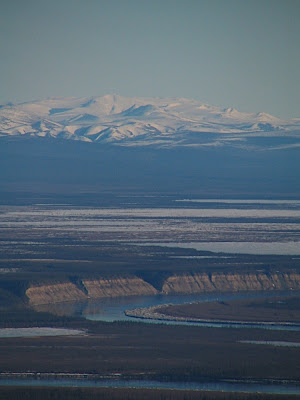 According to Google Earth, this cutbank is almost 3kms long. 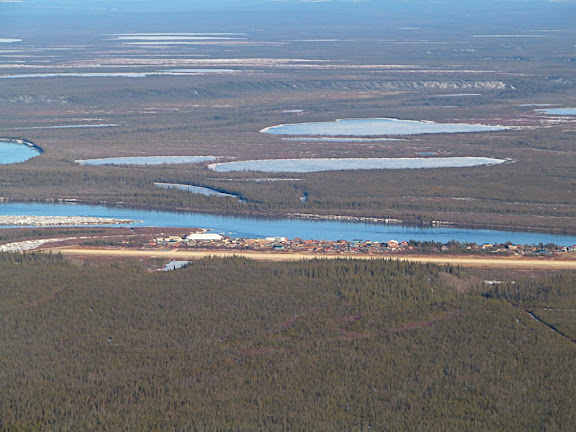 Zoomed in on Old Crow, down below. 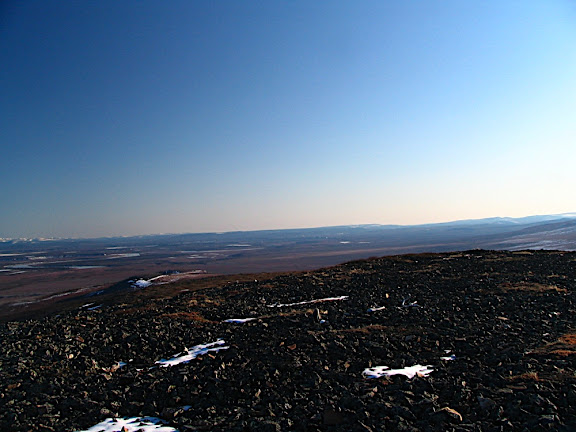 Looking west, 50 kms to Alaska.
There was only a gentle breeze, the sun was warm, and the air was refreshing. It was wonderfully quiet. I could have spent hours on top of Crow Mountain, absorbing the fantastic views and looking around the plants and rocks. 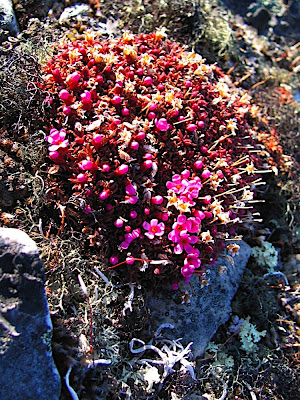 First flowers of the season. 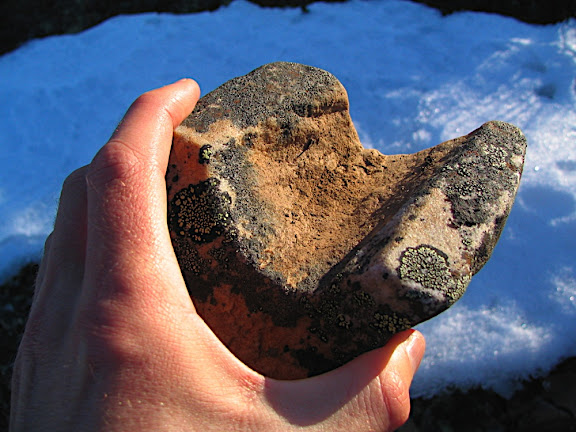 Natural, or human-made?
Eventually, I wandered down toward the road. As usual, it was a lot faster going downhill than it was going up. Thanks to the midnight sun, I had no idea what time it was and, quite frankly, I didn't really care.

As I passed one of the bushcamps along the way, the silence was broken by a voice. I turned to see a man calling, "Come for some tea!"

The night air was cooling and a cup of tea sounded like a good idea. I met David and joined him in his wall tent, where he lives year-round. The tea was good and we chatted for an hour or two before I resumed my journey down the mountain. 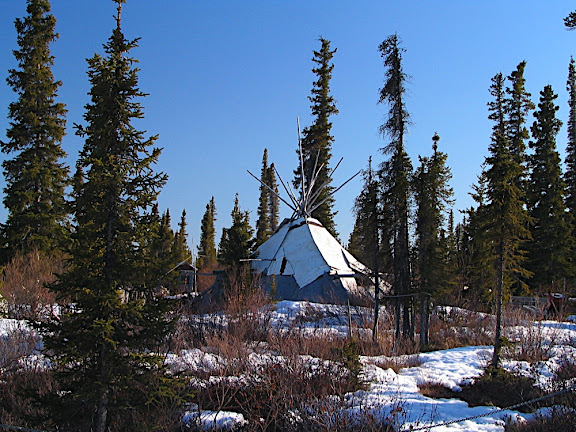 A bushcamp along the road. 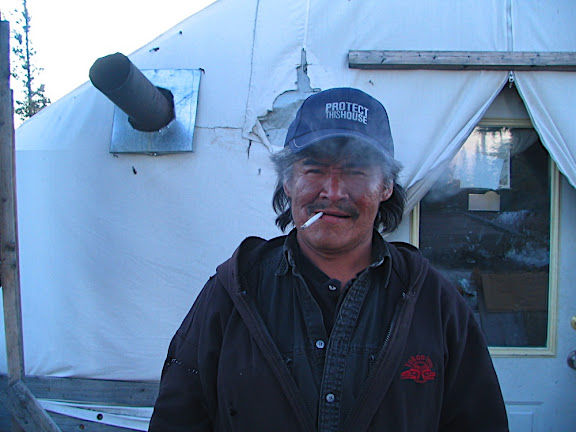 It was well past midnight before made it back to the B&B where I was staying. I slept very well that night.

If you ever make it to Old Crow, I highly recommend a walk up Crow Mountain.

Thank you for sharing this.

What an awesome meandering, complete with tea and company, minus a bear. What more can you want from an evening stroll!

Michael, thank you so much for sharing this walk and you beautiful photographs, I feel so refreshed! Also thank you for sharing the clean, unobscured photo from Crow Mountain...it IS stunning.
Smiles

Such beautiful sights, Michael.
And, love the self portraits:)

Hi Michael! It was great to take this trek with you through your photos and commentary!
Why and how does David live in a bush camp year round?

I can't really speak for him, but from my discussions with David, he lives out of town because he prefers it. He was born in the bush, after alll. In the North, there are a lot of people who live on the land year-round, only going into town for supplies or the occasional visit. (It makes census-taking difficult). David is a trapper. He cuts firewood for heat and cooks off of his woodstove. It's surprisingly cozy in a wall tent.