More than just a piece of paper...

Some time ago, I made a promise: "If you finish college or university, I'll be there for your graduation."

It was several years ago when I made this promise to Robert, a young man from Fort Liard. It was because of this promise that I drove 1,200 miles (1939km) from Whitehorse, Yukon to Fort Smith, NWT. Robert recently completed Aurora College's two-year Recreation Leadership Program.

Robert's achievement is a tremendous one. Not only was his a challenging program (3/4 of the second-year students dropped-out), he was raised in a community where, in spite of the teachers' best efforts, attendance and graduation rates are abysmally low.

It's an issue in many small, northern communities. The students in a single grade can have a broad spectrum of literacy levels and learning abilities, making it difficult to teach at an appropriate level. Student attendance is sporadic and attitudes towards the school system (from both parents and students) differ markedly from what you would find in southern Canada - partly due to the still-persisting after-effects of the residential school system). Fewer than 25% of the community's adult population has completed high school, although this is largely owing to historical factors such as there not being a high school until quite recently.

It's just not easy to graduate from a school where the students (and sometimes their parents) don't take it seriously or can't see the relevance. It takes a special kind of dedication and persistence to graduate from high school in a small northern community. It takes an even greater level of dedication and persistence to abandon the comfort and security of that community and go to college or university.

That's what Robert did and, even though he dropped out of his program in his first year, he got right back up, dusted himself off, and finished the job.

His determination and persistence were rewarded last weekend. He graduated! 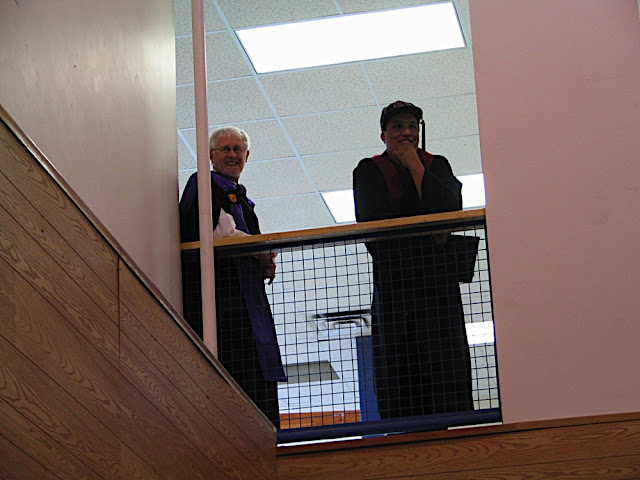 Waiting for the ceremony to begin. 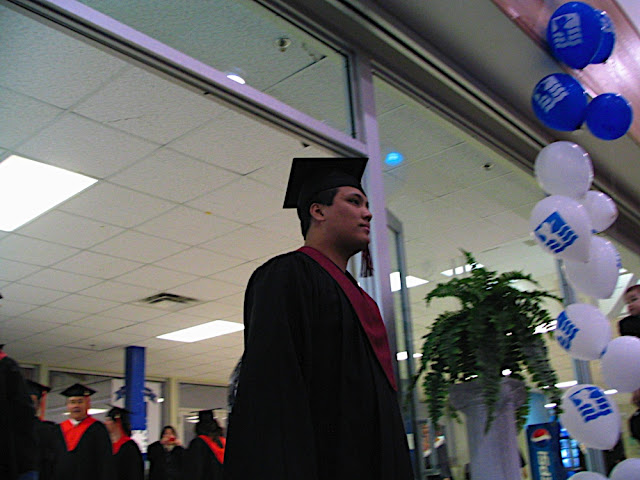 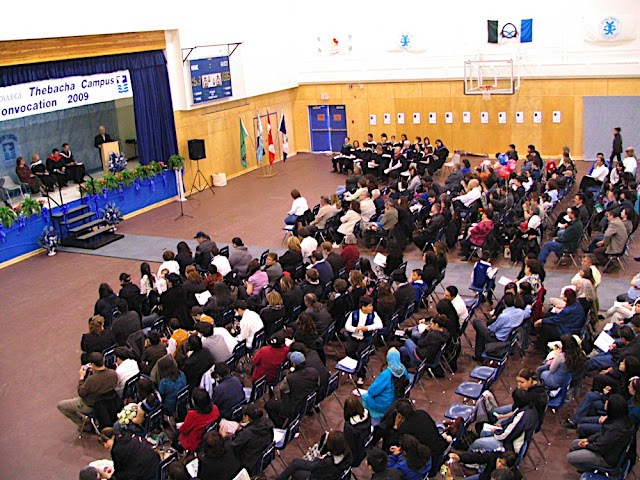 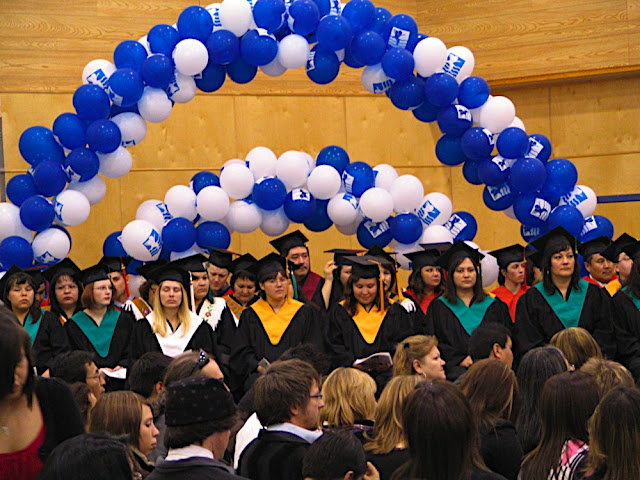 The graduates.
This year, Fort Liard had not one, but two graduates (You can, literally, count the number of college or university graduates from the community of 600 on your fingers and toes). Although her challenges were different, Molly overcame all obstacles to achieve her long-standing dream of going back to school. She left work and uprooted her family to go to the college in Fort Smith. One day soon, she might be using that education as the community's administrator. 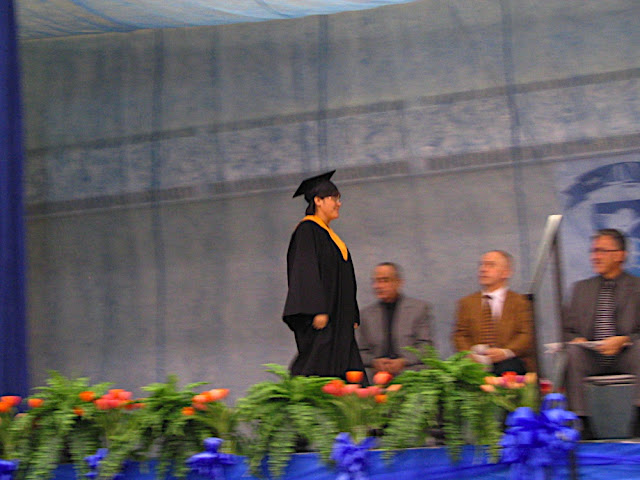 The final few feet before collecting that piece of paper that she worked so hard to get. 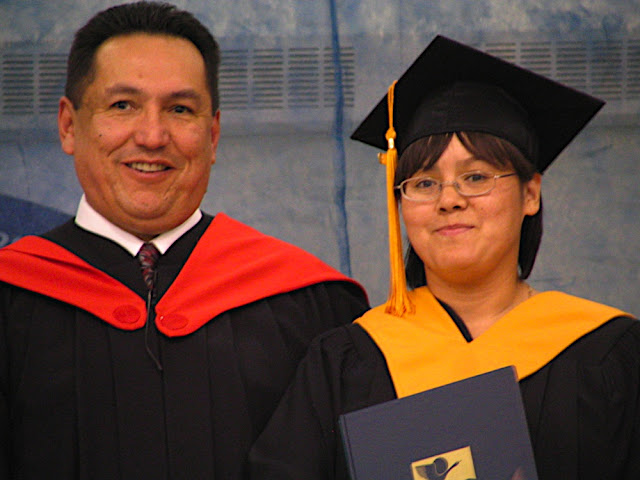 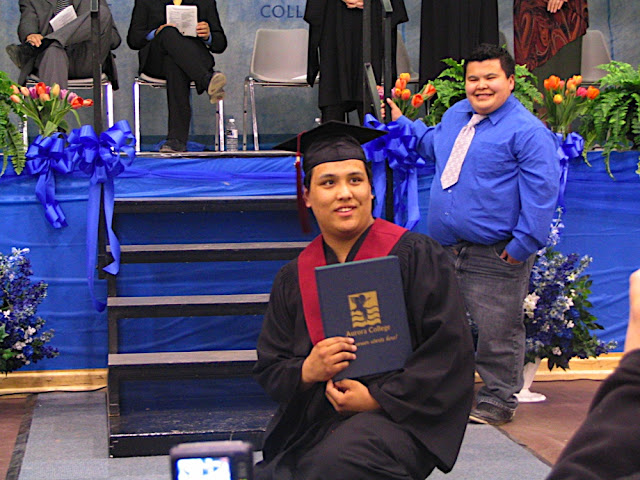 Robert
After the graduation, on my way back through Fort Liard, I noticed that more people were talking about going back to school and many had returned to the local adult learning centre to take upgrading for their high school equivalency. I think it's because of people like Robert and Molly who are demonstrating that it is possible. They are demonstrating that, not only is it possible, it's rewarding on many levels. They are proud! 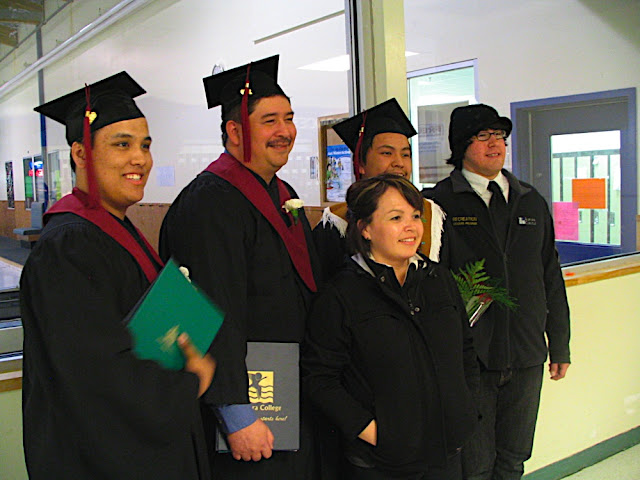 And I'm proud of them, too.

Congratulations, Robert and Molly! You are truly great role models. 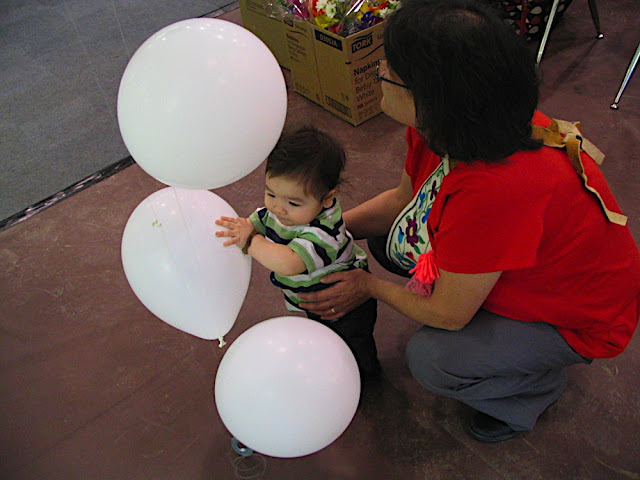 Setting a good example for the next generation. (Look at that baby belt! What beautiful embroidery!)

Thanks for this feel-good story. It cheered me up during my crappy morning. I have very little faith in the education system down here, I can't imagine up North...

What an inspirational story and valuable lesson. No matter what, it has to be the student who takes the initiative. No one can make them do this. Not their society, teachers, or even parents. Yes, we can try to inspire him, as you did. But, as you wrote, they have to be determined and to persist.

You must be so proud, and good for you to make that promise and for keeping it. I'm sure it mattered alot to Robert!

What a fantastic and inspiring story! Thanks for sharing!

Fort Smith is where I started my teaching career. That gym looks very familiar!

Wooohooo! Way to go Robert and Molly. It's so good to hear of people who push through tough situations to sucess...so many folk give up...good for them for persevering. They should both be extremely proud of themselves...pass on my congratulations!

Congratulations Robert and Molly. And, Michael, we're proud of you too.
Love, Mom