Making a snow sculpture is an a quasi-annual tradition for me, but this year I have yet to make one. I might get around to doing it, but in the meantime I'll just have to admire these works of art from last weekend's Whitehorse International Snow Sculpture Challenge. 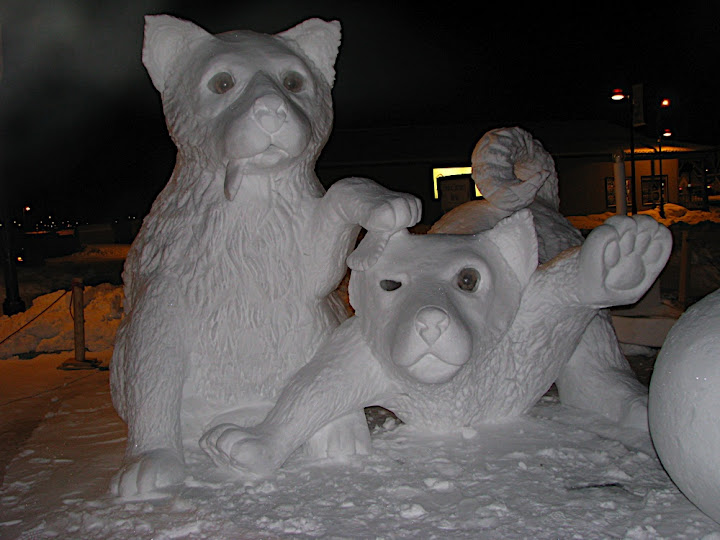 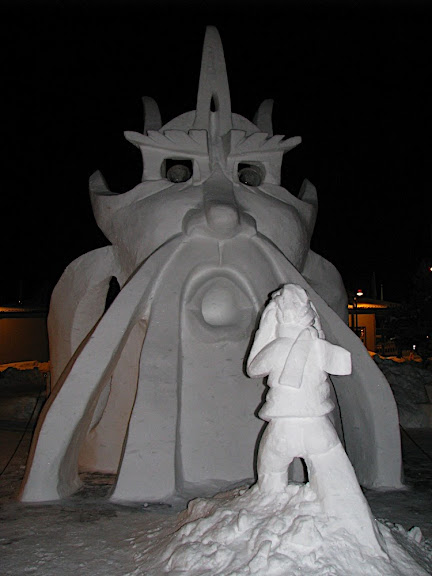 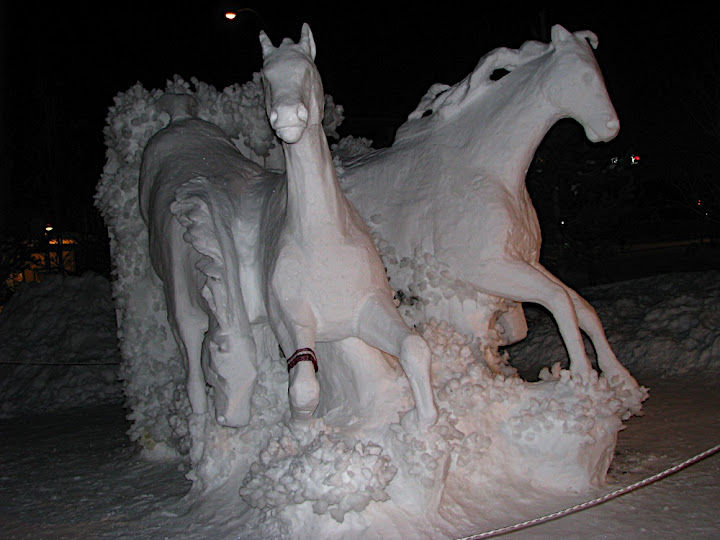 I suspect this is a sculpture of the Whitehorse Rapids (the city's namesake). Garters are a big part of Rendezvous. Without one (or a beard or a Rendezvous button), you might get thrown into jail by the Keystone Cops. Doesn't it make you wonder, though, how they managed to get one onto that horse? 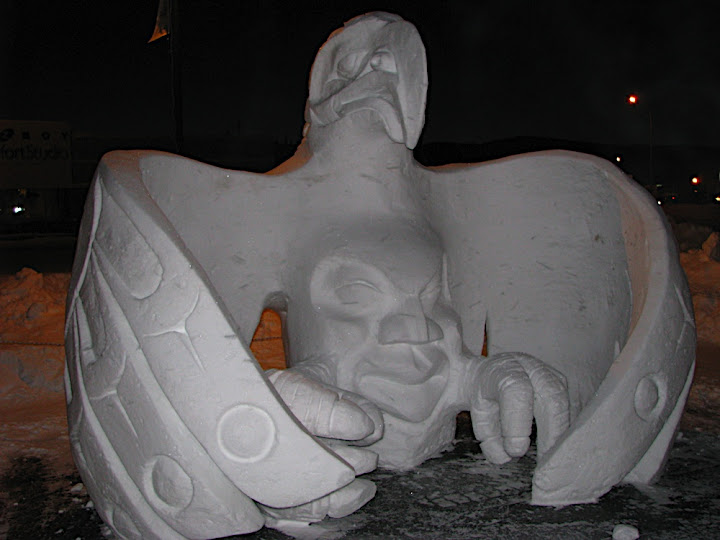 The Sundog Carvers were there. It's great seeing these young carvers try new mediums and grow as artists. 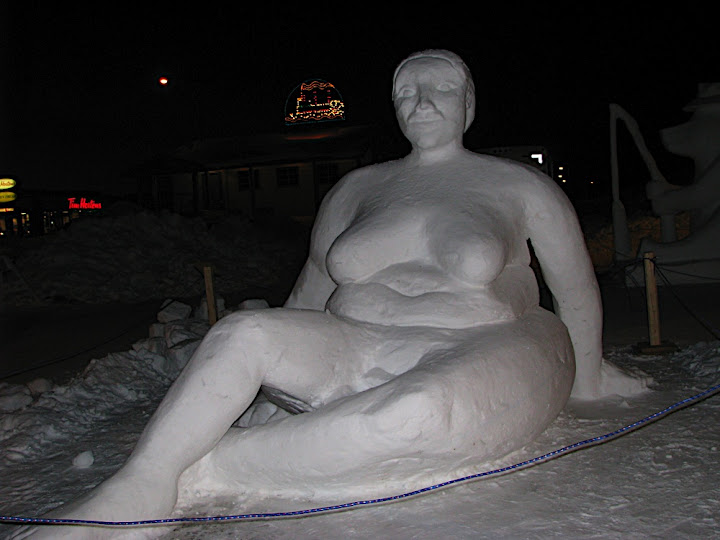 Another Sundog carving. She may look friendly, but she's actually quite frigid. 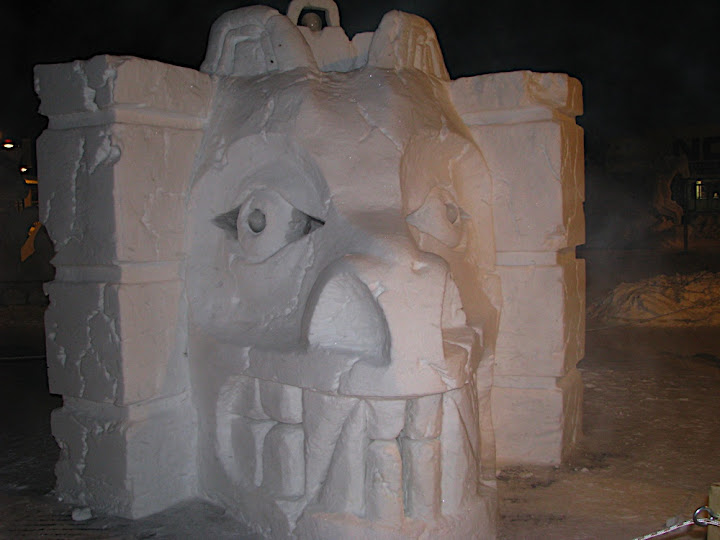 The front of another Sundog carving... 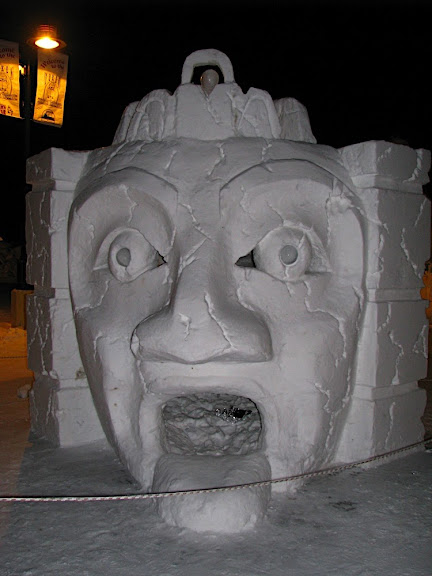 ...and the back. I think the foil inside of its mouth would have been put there so they could light a coloured flame, which would have looked pretty neat.
This carving, which I think was the most technically difficult, was done by the team from Finland. 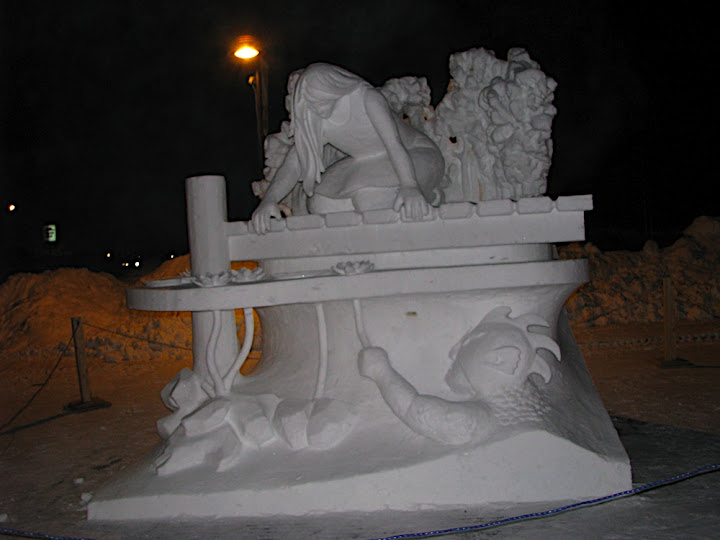 It can't have been easy to carve the stalks for the lilly pads without them breaking. 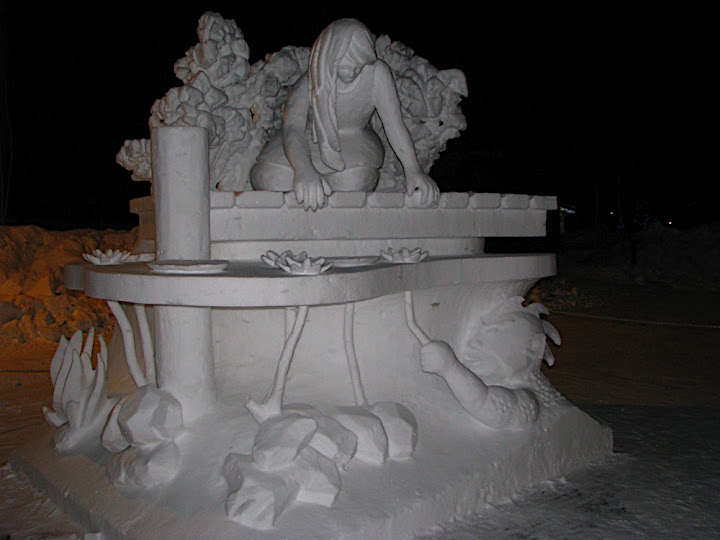 The team from Alaska (Skagway), always manages to carve an entertaining sculpture. In this one, "The Beaver's Dream", a man sits in his cabin while a couple of beavers eat it - and him. 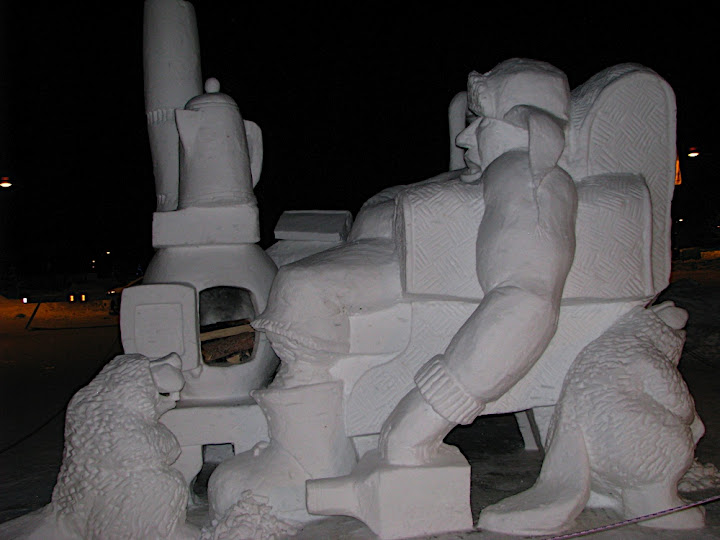 Chewing on a wooden leg. 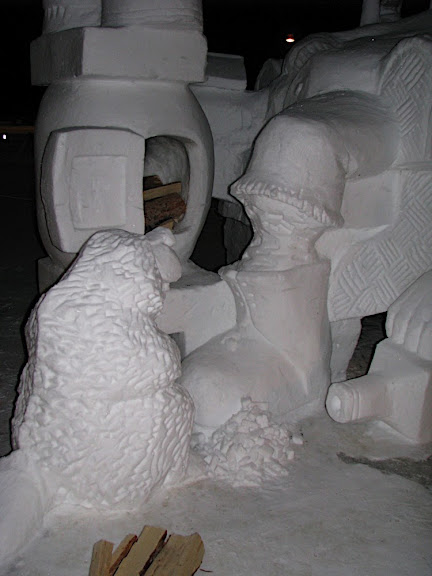 A cabin complete with wood in the wood stove. They did a great job on their textures. 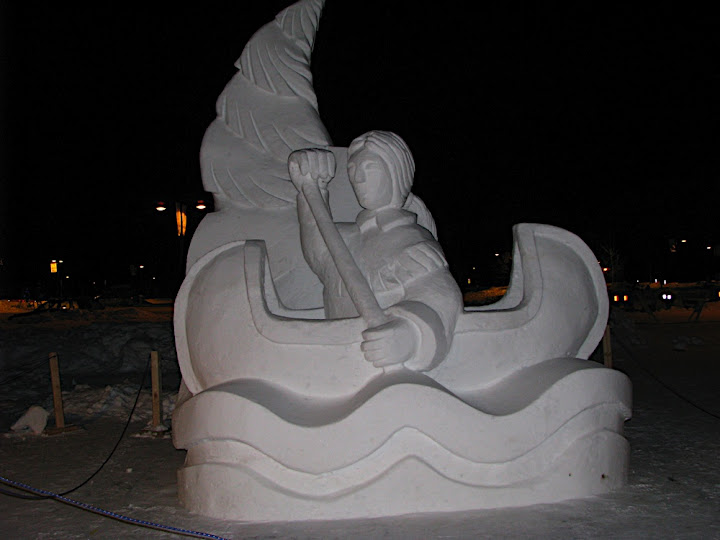 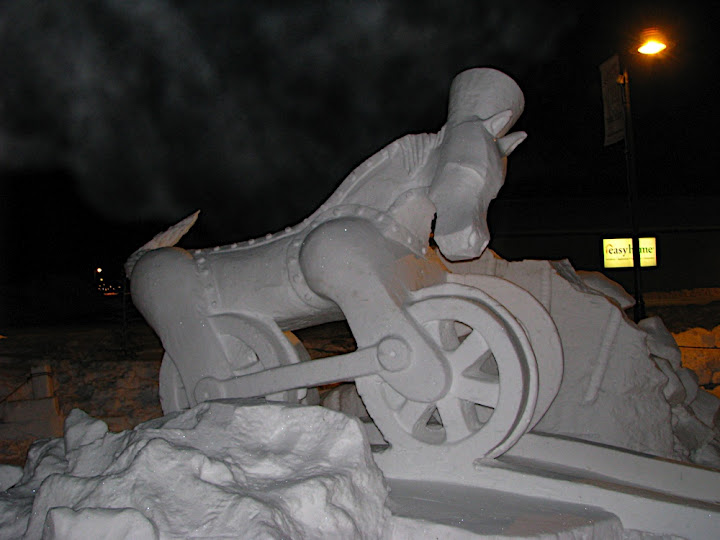 A tribute to the "iron horse". 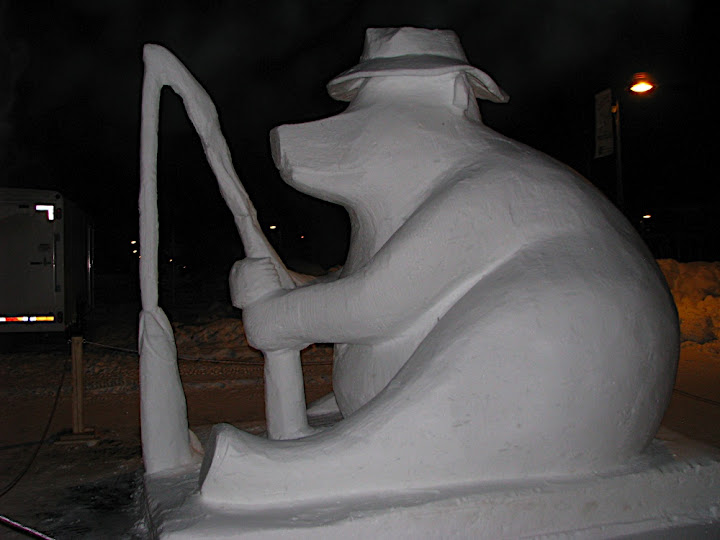 A fishing bear.
And finally, what I consider to be the most impressive sculpture at the Challenge. The "Winter Queen" (not sure of the actual title), is very large - and it's not easy to keep such clean and flowing lines in a carving that big. Unfortunately, the pictures don't portray its size very well. The smaller details go a long way to giving the carving some depth. This is one of those carvings that just makes you want to imagine an epic story in distant lands... 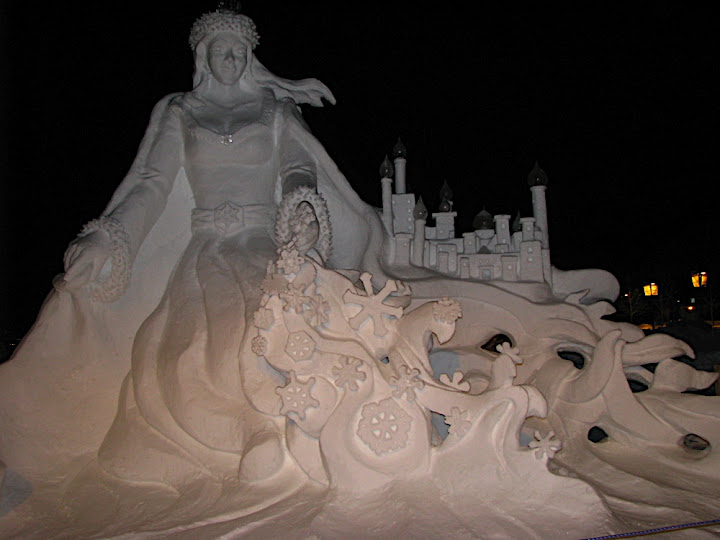 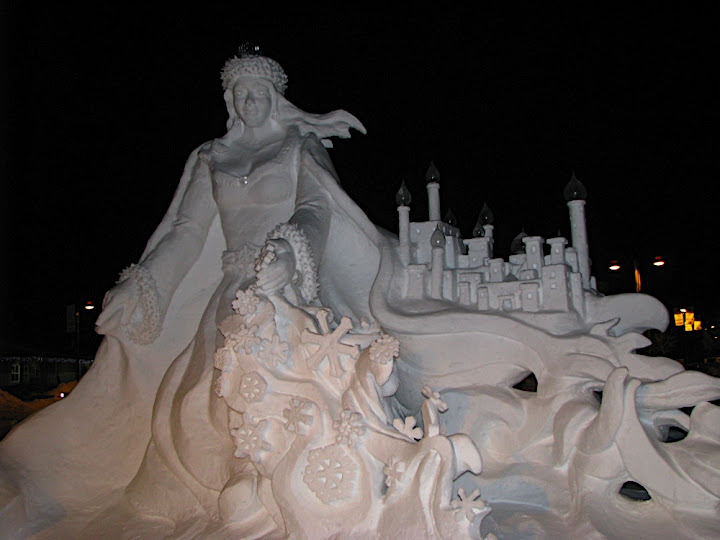 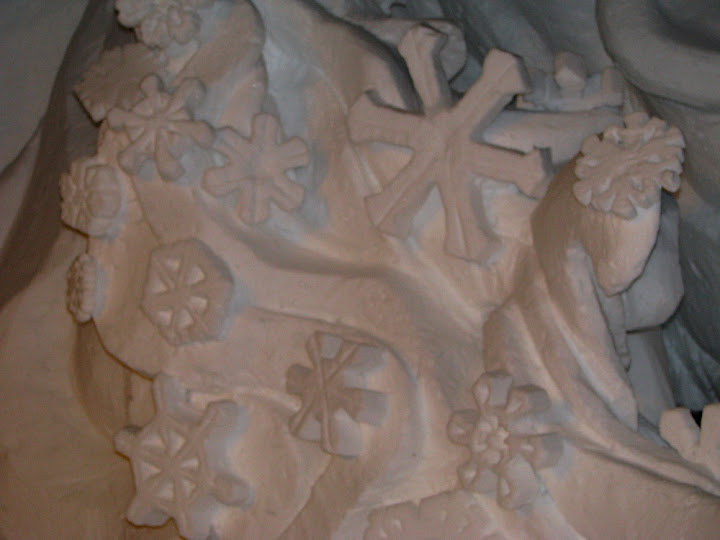 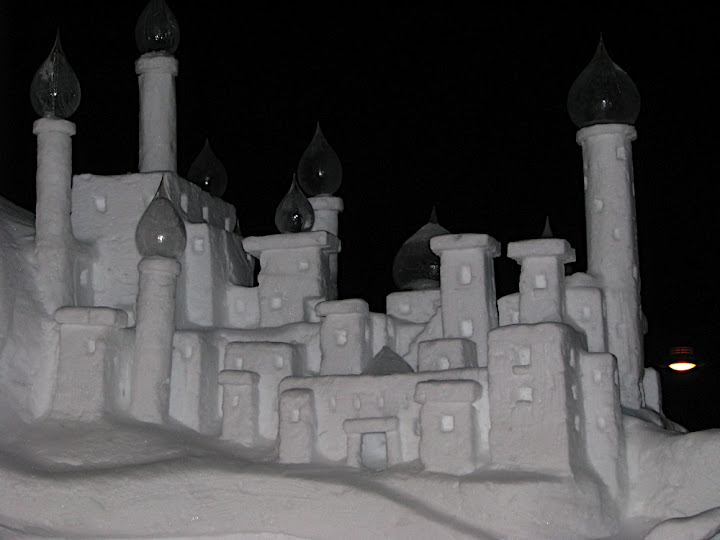 The minarets were made by filling balloons with water, allowing them to freeze part way, and then draining the rest of the unfrozen water out of the frozen shell.

Email ThisBlogThis!Share to TwitterShare to FacebookShare to Pinterest
Topics: carving

That bear is doing WHHHHAAAATTTT??

Why is there always a naked girl??
When I first saw this post I thought, "Is there anything he won't try?"

The carving of the eagle which you lumped in with the Sundog carvers is actually done by the Whitehorse Team. Calvin Morberg was the team captain and was a member of Team Canada 2009 in Harbin China and Quebec Internationals.

Hi Meandering Michael;
Thanks for the posting and the review of the Snow Queen. As part of the team I must say we had fun putting it together.
David Dureault
Team BC

They are look so great with remarkable designs. That last photo with that large size carving was really good with the much attention to details that you can't resist to watch.