Shortly after the cub is born, the Yukon human family tires of its confinement to the den. On a beautiful, sunny, winter day, they emerge from their shelter to romp and play. The cub is tucked safely against her mother's body to ensure that she stays warm.  The humans are poorly suited for this winter environment, and yet they somehow thrive.  Biologists believe it may have something to do with the recreational activities in which the Yukon humans engage.

Under the close supervision of the stud, the two-yearling works hard to learn how to ski. Of all the animals in Canada's boreal forest, the human is the only creature that derives pleasure from having plastic, fibreglass, or wooden planks attached to their feet.

Later, the family makes its way to a sheet of ice, where the two-yearling learns how to skate. Of all the animals in Canada's boreal forest, the human is the only creature that derives pleasure from having blades of metal attached to their feet. 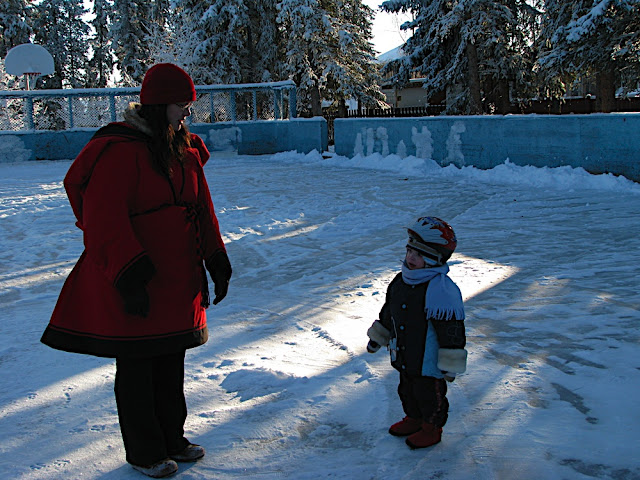 Out on the ice sheet, before the skates are attached to her feet, the two-yearling communicates with her mother.  The cub is warm and cozy on her mother's back.
Before long, the hairless creatures must return to the warmth of their heated den.

Fawn looks great in her amouti!! I am still packing Hunter in mine. So cozy!

The amouti must be the ultimate in baby packing. I wish I would have had one when my son was born, right before Christmas in Winnipeg. Anybody out there familiar with prairie winters???

Yup! I was raised in the prairie.