Nary a berry on Mount Sumanik.

On Saturday, after more than a week of rain, the weather finally cleared enough to go for an un-soggy hike. I had been chatting with Dennis earlier in the week and we were talking about berry picking. I realised that I had never checked out the berry situation on Mount Sumanik and thought that it might have some potential for blueberries and cranberries. It wasn't long before I decided to investigate.

After a little bit of research on Google Earth, I saw that the best way to get to Sumanik would be to drive up Haeckel Hill, follow a trail that leads to a saddle between Haeckel and Sumanik, and then bushwack up Sumanik.

Eric and Elias joined Jade and me for the journey. As with roadtrips, hiking trips tend to go a lot slower when small kids are involved, so we never expected to get to the summit of Sumanik on this trip. We were going to the slopes of Sumanik to pick berries.

The mid-morning wind was cool on top of Haeckel Hill. A level line of week-old snow lay across the taller mountains in the distance. The wind turbines hummed and wooshed in a way that almost seemed threatening. When there's ice buildup on the blades, they can be dangerous. Fortunately, they looked clean and dry. 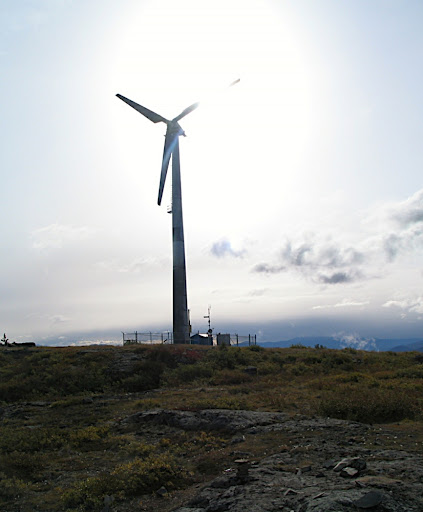 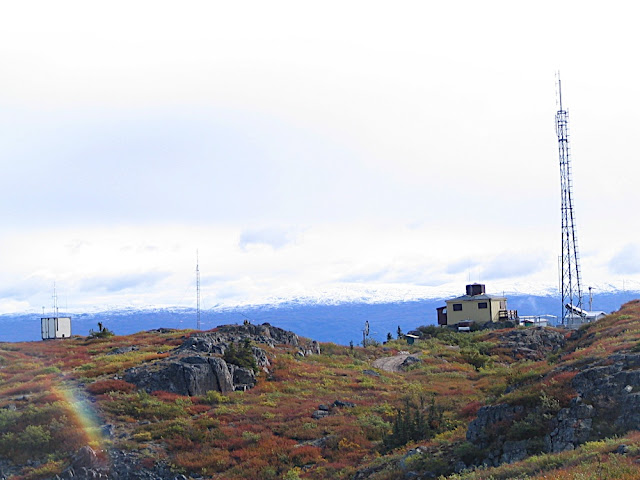 A level line of snow lies across the mountains in the distance.
If you're not into hiking (or are not able to), are into great mountain views, and don't mind driving up less-than-perfect roads, then Haeckel Hill is for you. 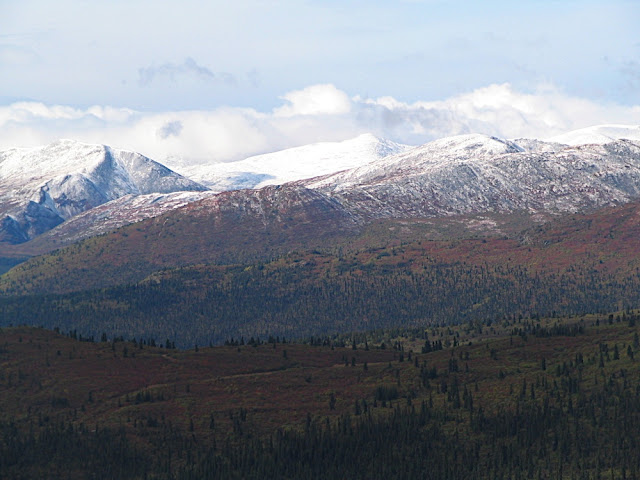 The view from Hackel Hill towards Jackson Lake. 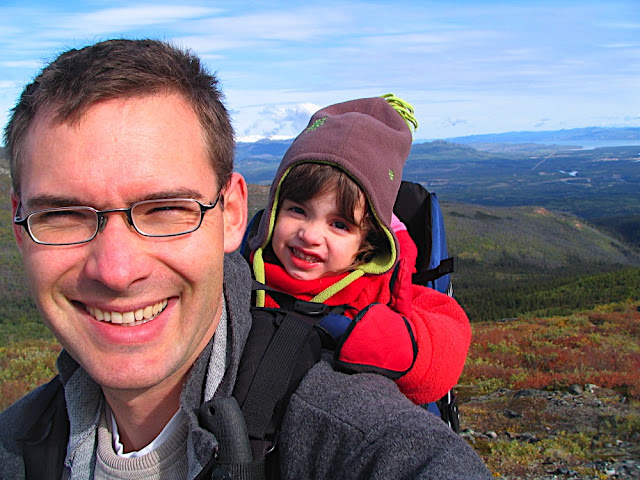 Jade and her packhorse on Hackel Hill.
After a quick look at the wind turbines, we started downhill on the steep trail that leads to the saddle. 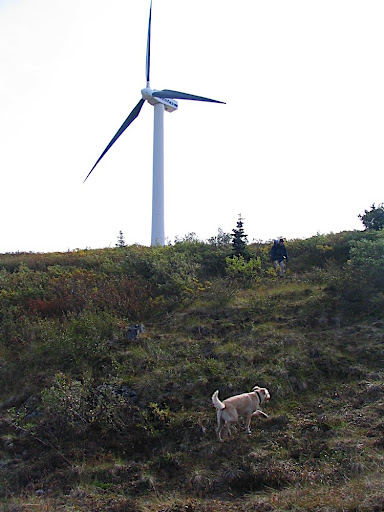 Eric and Elias hike down from Haeckel Hill on a not-so-steep part. 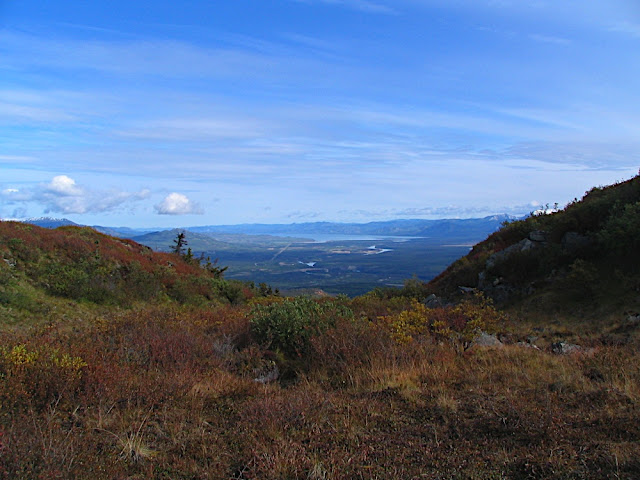 Just before the steep part of trail, with Lake Laberge in the distance. 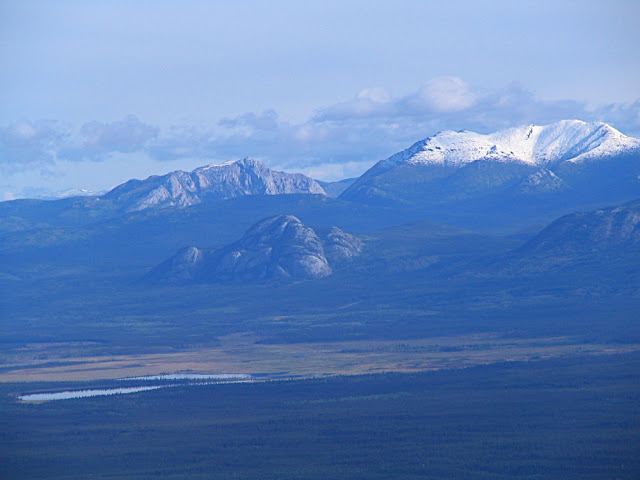 Across the Yukon River valley from Haeckel Hill.
Down in the saddle, there is a little meadow. Hardly into our hike, the kids started asking for food. The meadow was sunny and warm so we decided to stop for a little picnic. We sat on some rocks and stuffed our faces, consuming fuel for the uphill hike ahead. 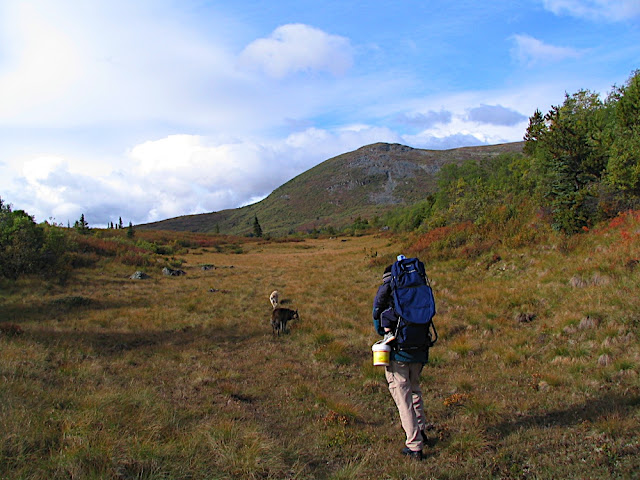 The picnic meadow between Haeckel and Sumanik. 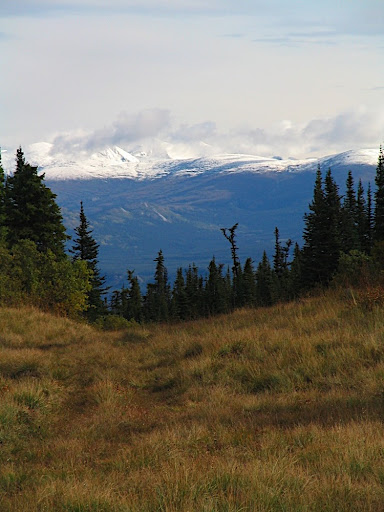 Looking back down the picnic meadow.

Luckily, the hike up Sumanik wasn't the willow-whacking trek that I thought it was going to be. We found a nice trail that lead out of the meadow, right up the mountain. The grade was never too difficult, so Jade and Elias were often out of their packs doing a little hiking of their own.

By the time we were halfway up Sumanik, two hours had passed since the start of our hike. We were going slowly. Without the kids, we would have been to the top of Sumanik in a fifth of the time. 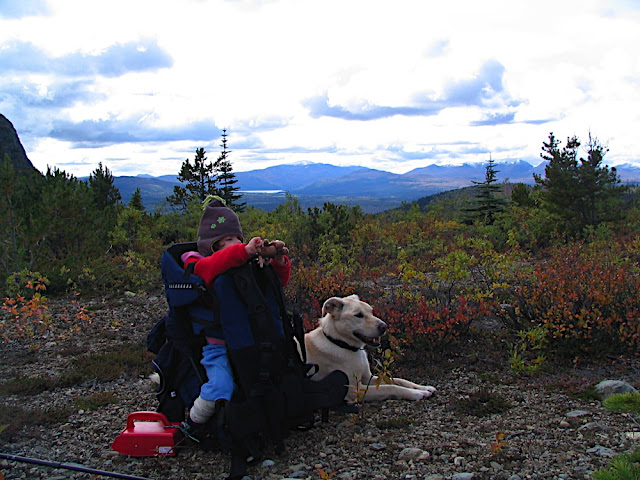 Taking a short break. Fish Lake can be seen in the background. 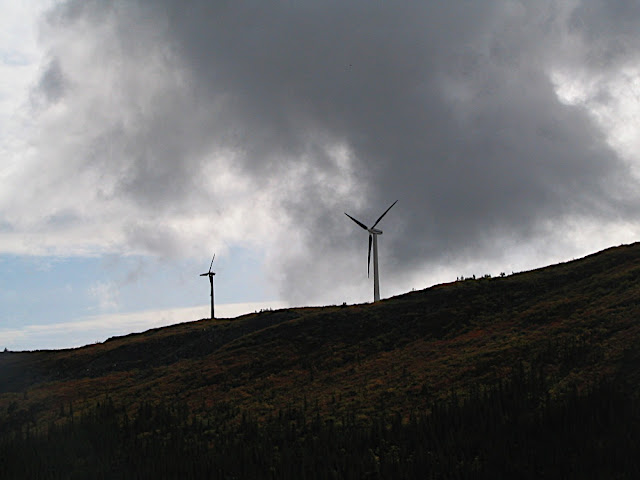 Looking back at the wind turbines.
Jade started getting cranky and I realised it was her nap time. I gave her her afternoon dose of anti-seizure medication and put her back into the kid-carrier. She had a small seizure just as she was starting to fall asleep. Since she was behind me in the pack, I couldn't see her to see how she was. Fortunately, after a few seconds, I felt her move in a non-seizurey way. I remembered that, when she was smaller, I used to carry a pocket mirror so I could look back at her to see that she was alright. I wished I'd had one with me then and will remember to bring it with me the next time we go hiking.

On the way up, I was looking for blueberries but noticed only a few small patches of blueberry plants here and there. None of the plants had any berries on them, except for one that I couldn't stop to pick at because Jade had just fallen asleep and stopping would have woken her up. It didn't take long to realise that, as a blueberry picking expedition, this one was a bust. As a scouting expedition it was a success. I knew I wouldn't be back to pick berries on Sumanik again any time soon because of the absence of large berry patches, but I'd be back for more hiking. I wasn't above the treeline for long before I concluded that Sumanik has the best top-of-mountain walking in Whitehorse. It's relatively easy to get to and it's big, with lots of places to explore. 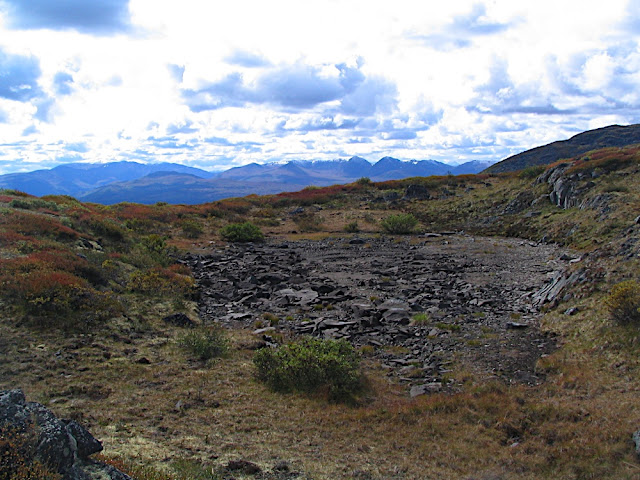 Exploring the top of Sumanik, finding some heaving rocks. Is there a geological term for this kind of feature? 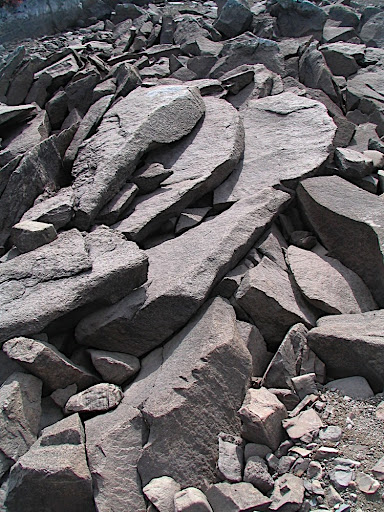 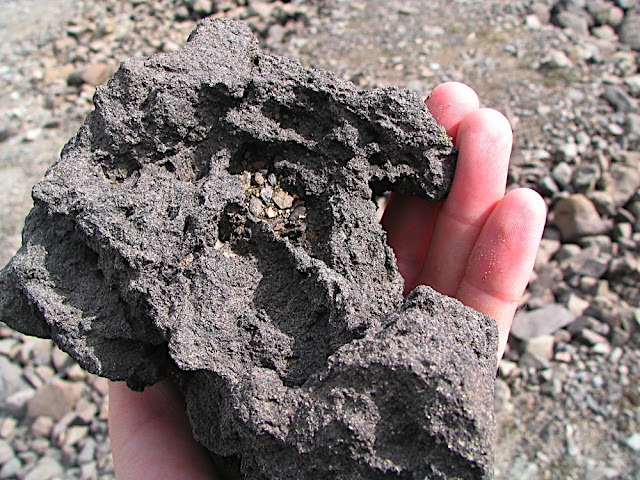 One of these rocks is not like the other ones... 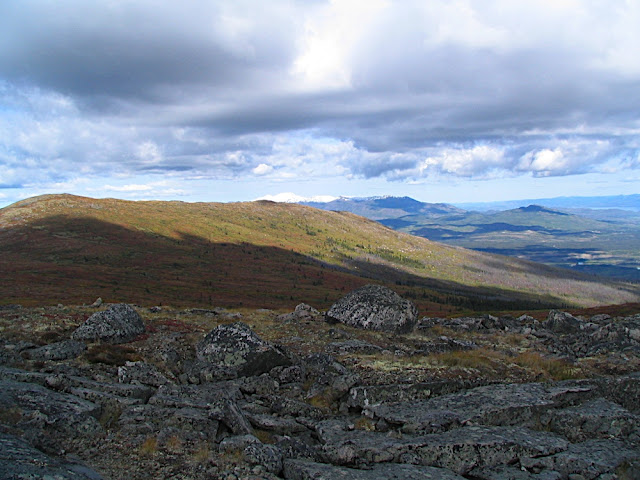 Nice walking.
Now well ahead of Eric and Elias, who had stopped further down the mountain to pick crowberries (yuck!), I walked towards the peak. I didn't want to get too far ahead of them, so I looked for a place with a good view of my backtrail. Unfortunately, all of the places with good views were windy and cold. If I was going to stop, I wanted it to be somewhere that Jade would be able to keep warm.

Luckily enough, I spotted a large rock that someone had turned into a quasi-inukshuk, possibly as a windbreak for hunting? 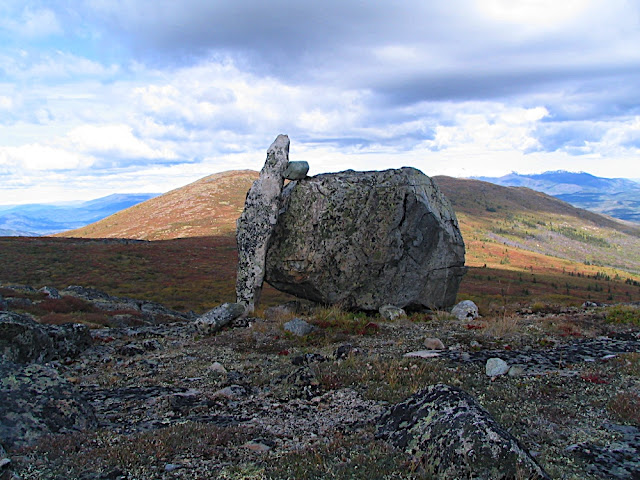 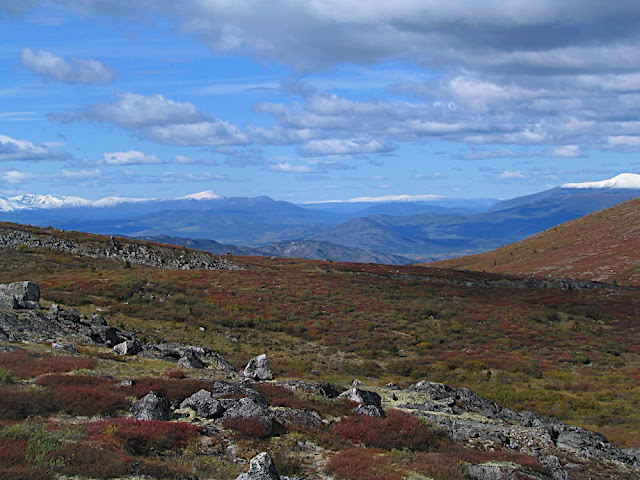 View from the windbreak. 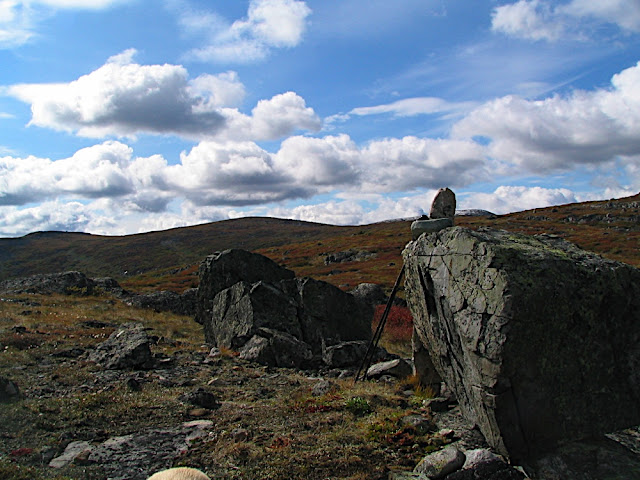 Looking towards the summit from the windbreak.
Jade woke up as soon as I put her down, so we had a little snack. Nanuq smelled something upwind of us that he didn't like; he was sniffing and growling in the direction that we would have headed if we hadn't stopped. We spent long minutes looking for the source of his concern, but saw nothing. Still, he remained on edge so I remained vigilant with the bearspray at the ready (which is stupid to use on something that is coming from upwind). 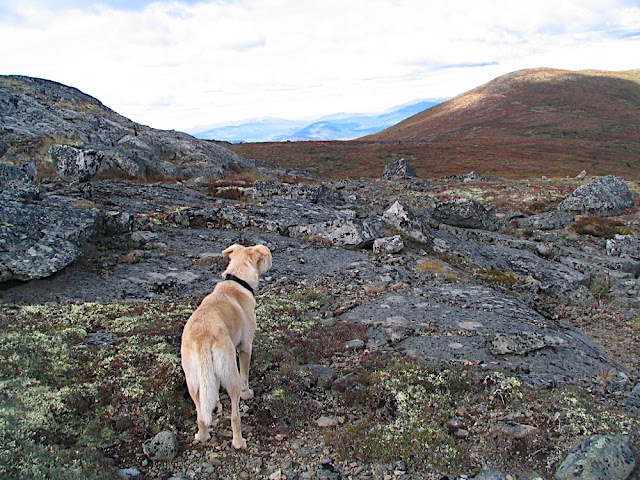 Nanuq gets wind of something he doesn't like.
Fortunately, nothing came. A little while later, we were joined by Eric and Elias. After they finished their snack, we decided it was time to head back. The peak was beckoning us, but we had to do the responsible thing and get our kids home in time for supper. 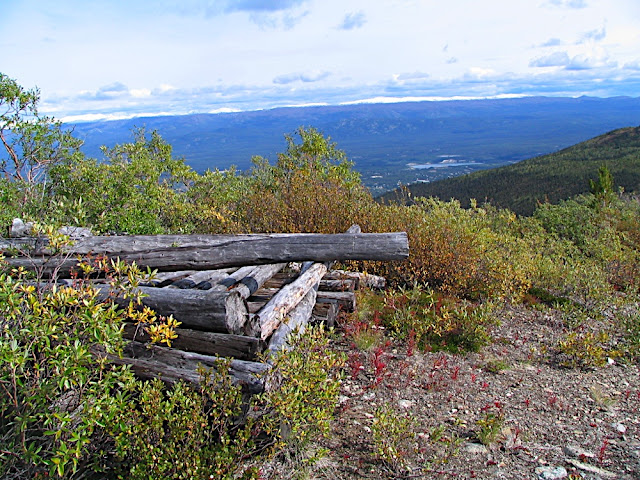 Jade walked a good portion of the way downhill. Near the picnic meadow, I spotted some small blueberry plants that still had some blueberries on them. With Jade in the pack again, I picked a handful of the bursting berries, passing them back to the little chirping bird on my back. "Booberries?" she kept chirping, "Mo booberries?"

I savored the few berries that I managed to sneak away from the berry fiend and was pleased that I got to eat some, even if they were but a few.

The hike back up Haeckel Hill was steep, but didn't seem as long as it felt coming down. On the climb back up, we watched eagles and ravens soaring overhead. On occasion, a raven would attack and eagle, but I never saw an eagle attack a raven. I've often seen ravens attacking eagles, but have never seen an eagle attack a raven. Do eagles ever attack ravens?

The kids sang and played in their carseats on the drive back down the mountain. We really didn't go very far and didn't get to see as much as I would have liked - and hardly ate any berries - but the sun was shining and the air was fresh and the colours were beautiful.

All in all, it was a good way to spend the day.

Some of those pictures looked like the beautiful tundra we left behind.

And it looks like you make a great Sherpa for Jade!

Those turbines are quite ominous, aren't they? I always feel that way when I go up there.

Interesting trail off the backside, looks like some interesting routes back there, maybe even a couple of loop options back to the Alaska Highway.

Is that trail bikeable?

Not so bikeable down to the Picnic Meadow. It's a little steep, even for hardcore bikers. After that, who knows? More investigation is required...