The fuel reserve had strategic importance for the defense of North America. According to one of the older residents in my neighbourhood (who has lived here since it belonged to the military), the army used to conduct exercises around the tank farm, running drills to protect it from enemy attack. That's why, if you look carefully outside of the fenced-in area, you can find the remains of a network of trenches and fox holes.

Many of the tunnels have collapsed, leaving nothing but long, straight slumps in the ground. If you look carefully, though, you can find a way to peek inside some of the underground chambers. 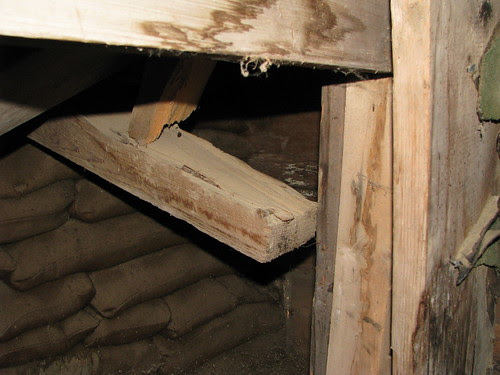 Sandbags and timbers, holding up the remains of the Tank Farm's defense network.
It kind of makes you wonder what else is hiding out there.