From the promoters of Mushy Poo(tm)...

Just when you thought it couldn't get any more amazing than Mushy Pootm,  Michael's Meanderings invites you to see a phenomenon so astounding, so incredible, that it must be seen to be believed!!!
Are you a world traveller?  Have you "been-there" and "done-that" and been left unimpressed with the Seven Wonders of the World?  Well, we've got something that you won't soon forget. 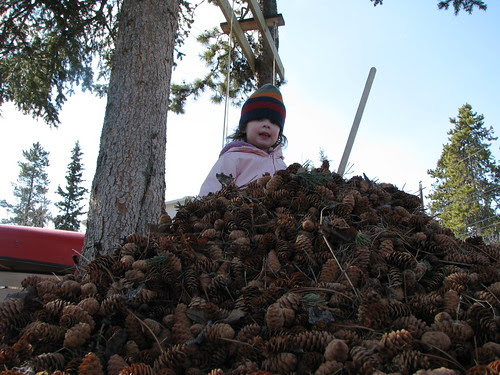 Not to be confused with Pile O'Bones, Piles of Slag, a Pile of Crap, and other famous piles, this wondrous structure was built from the pine and spruce cones shed from only two trees, using nothing more than a common garden rake.  It's existence was made possible only because of an unusually prolific year of cone production.
You'll want to hurry to see the Pile O'Cones, though, because it won't be around for much longer.  Following in the paths of other wonders, modern and ancient, the Pile O'Cones is coming down.
But don't despair!
Just like the Berlin Wall, you'll be able to acquire your own piece of history.  Yes, Michael's Meanderings is auctioning off pieces of the pile!
Submit your bid for a cone today - and don't delay!
Bids can be left in the comment section of this posting.  The auction closes on May 2nd at 17:00 PST.  You will be responsible for any and all delivery costs that may be incurred.
Good luck, bidders!