From marge to marge on Lake Laberge

Thanks to Norris and Tim, who supplied most of the pictures in this entry. There were more pictures that I wanted to add, but the site that I was uploading them to wasn't cooperating.

Lately, I've been swamped with work and family obligations and felt like I needed to recharge my batteries. For me, recharging my batteries means getting out and spending a night (or more) beneath the stars - something I've done far too little of over the past couple of years.
When Norris, who has been wanting to try his hand at winter camping, suggested that we head out over the Easter long weekend, I readily agreed. My brother Tim also decided to join us.
Choosing a place to go is always interesting. For me, the more remote the location is, the better. That wasn't going to happen on this trip, though. Norris hadn't gone winter camping before, so we decided to go for just one night. He also has a bad knee, so our destination would have to be within easy walking distance.
In the end, I decided on Richthofen Island on Lake Laberge. The walking was level and, on the far side of the island, it would be easier to pretend that we were in some remote, out-of-the-way place.
I often wondered what the "marge of Lake Labarge" is and I've heard many others ask the same thing. Is the "marge" a unique geographical feature perhaps, like an island or an inlet or a shoal? According to my dictionary, a "marge" is nothing more unusual than the "margin or edge". Basically, the lakeshore - something that every lake has. At over fifty kilometers long and, in some spots, five kilometers wide, with a surface area of 201km2, Lake Laberge has plenty of "marge".
Packing was quick and easy and we were all responsible for carrying our own gear. My brother decided to ski with a pack. I decided to walk, pulling a sled, snowshoeing when the conditions warranted it. To make things easy on Norris' knee, we outfitted Norris with my kicksled (and Nanuq to help with the pulling).
We started from the Deep Creek Campground. For our journey to the Island (about 2.5 km), we were joined by Norris' wife, Charmaine, and our friends, Brendan and Chandra.
In spite of the cloudy conditions, it was bright out. The snow had drifted hard in some spots, but was soft in others. Still, the going was fairly easy. 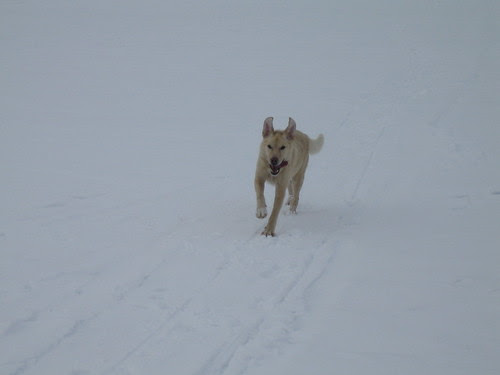 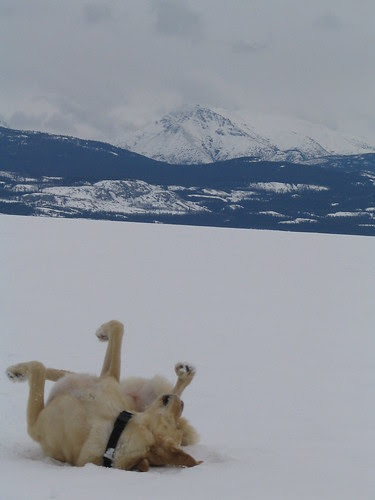 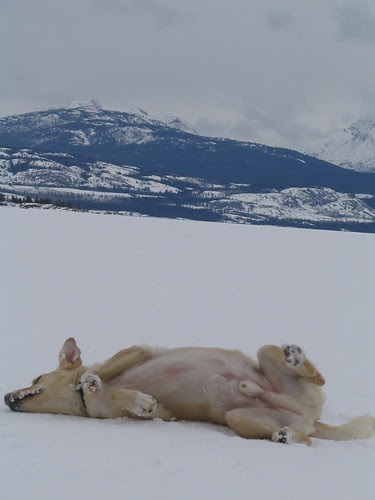 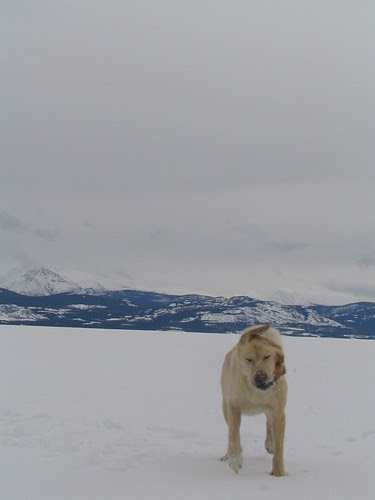 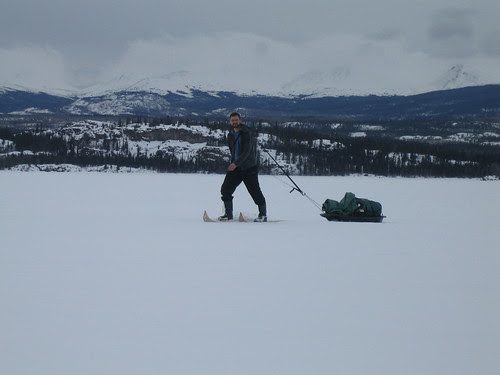 Snowshoeing over a soft patch. 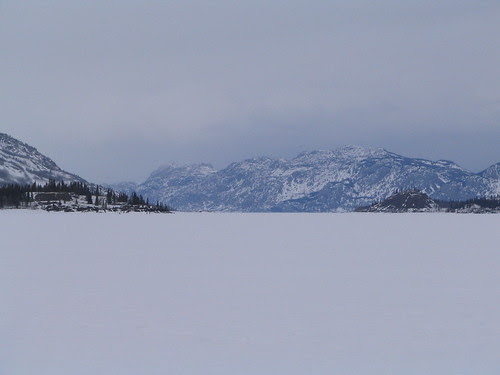 Looking down the lake.

Nanuq helps Norris with his gear. Charmaine is in hot persuit.
After carefully choosing a good camp site on the island, we cached our gear and headed back towards Deep Creek. Our friends, Linda and David, had invited us to their place for their annual Easter get-together. The plan was to meet Fawn and Jade there, have some good food and conversation and then head back to set up camp before dark. 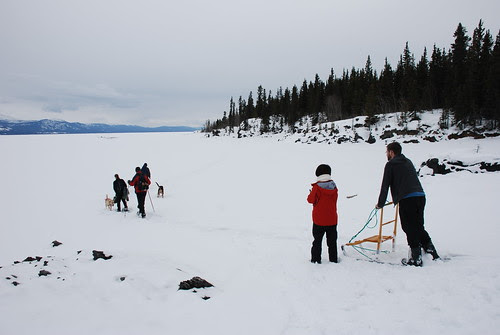 Heading back across the lake.

Charmaine tries to take a turn at the kicksled, but Nanuq insists that she help out a little.

Brendan and his dog, crossing the lake.

Cathers Adventures, passing by as they bring some dogs and gear across the lake. 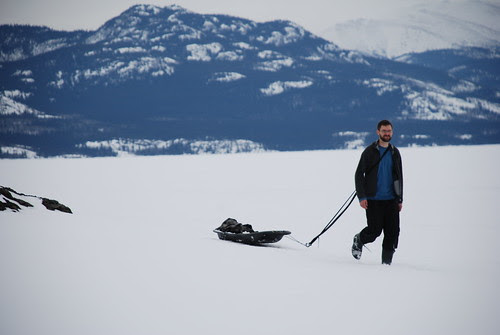 Walking around the end of the island, with my snowshoes and a warmer jacket in tow.
At Linda and David's, we met up with Fawn and Jade, as planned. Jade hunted for Easter eggs while Tim, Norris and I refueled, feasting on the bounty of food. 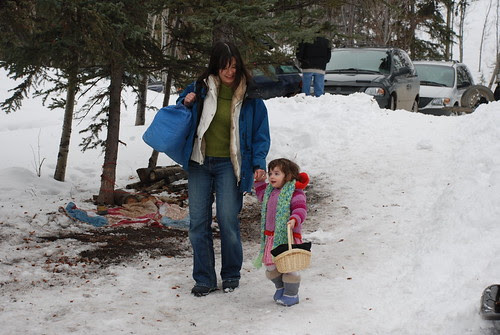 Fawn and Jade arrive. Jade's all ready to hunt for Easter eggs.
By the time we left, the weather had changed. A spring "blizzard" had moved in. While not as intense as some blizzards get, it was strong enough to obscure our view of the island - and any other land marks. It was a neat feeling, standing in the middle of the lake seeing nothing but white.
The snow was wet and sticky, but the wind was consistent, making it easy to keep our bearings. We kept together and continued on our way, hoping to make camp before dark. 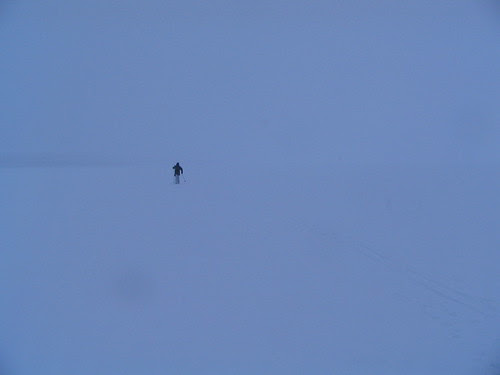 Tim skis ahead before the visibility gets worse and we regroup. 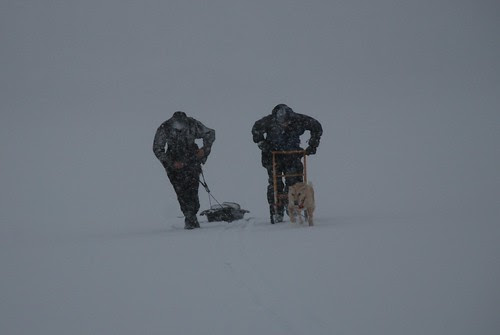 Norris and Nanuq and I make our way across the lake.

I stopped to take a video of the white-out conditions. I had to take off my glasses because they were getting caked in wet, sticky snow.
The first-ever Michael's Meanderings video.

As quickly as it came, the storm passed.

The end of the island, after the storm.
We managed to make it back to our campsite and set up our shelters before it got too dark. The site was well chosen, close to the lake but out of the wind, with a plentiful supply of firewood.

Tim's lean-to.
After a late-night steak dinner and some hot tea, we turned in to our respective lean-tos. It was a warm night. After the inevitable ten minutes of getting everything good and comfortable, I lay there, listening to the gentle breeze in the trees and the crackling of the fire in the fire box (I use a firebox when winter camping because it doesn't sink into the snow when supported by a couple of logs and hardly uses any wood - unlike a conventional campfire.) Nanuq snuggled into his spot in my shelter and was soon snoring quite contentedly. Still feeling wide awake from the day's activities, I thought it would take forever fall asleep; a moment after I had that thought, I was.
I slept deeply until I had to get rid of some of the tea I had consumed earlier. Knowing that it's better to just bite the bullet than it is to lie in the sleeping bag suffering, I crawled out and walked through the snow in my bare feet. For some reason, the sleeping bag always feels warmer when I get back. I fell asleep again, warm and cozy and happy.
The sun rose over the mountains and shone brightly through the trees and into our camp. Nanuq left the shelter of the tarp and began to patrol our camp before occupying himself by licking the remaining steak juices off the now-cooled firebox grill. Had it been later in the spring, I would have thoroughly burned off any food remnants to keep the critters disinterested. For that matter, later in the season, I wouldn't have been cooking anywhere near where we slept. Ah, a cozy and efficient camp; just one of the many joys of winter camping. 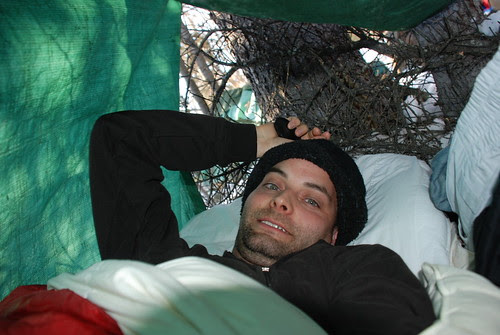 Tim wakes up in the morning.

Our camp, with a kettle full of melting snow on the firebox.

I take a few moments to enjoy the warmth of the mid-morning sun. A beautiful day, indeed.
Shortly after we had finished our breakfast, we heard a snow machine coming around the island. David had mentioned that he might head out to visit us. When the snow machine made a bee-line to our camp, we knew it was him. His wife, Linda, and son, Galen, were skiing out to visit us also. David offered Tim a ride on his snow machine to go check their progress. 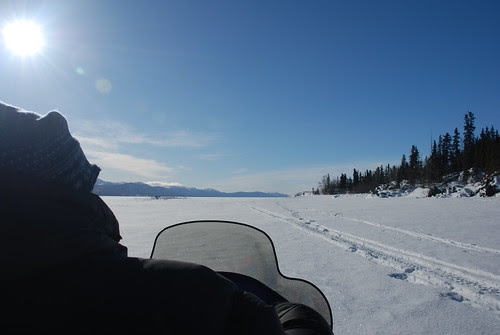 Heading back around the island on the snow machine.

After Linda and David and Galen left, we struck camp and headed back to Deep Creek. I had seen some overflow on the lake the night before and wanted to get back before the snow got too soft. It was bright, sunny, and warm and it wouldn't take long for the snow to get mushy. 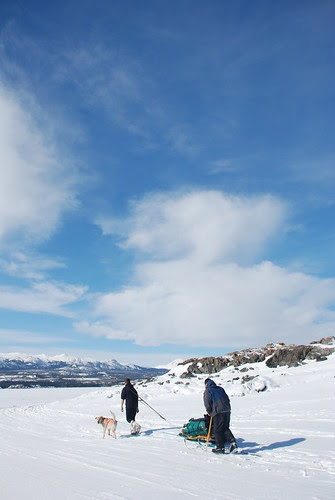 Once again, around the end of the island. This time, homeward bound.
The snow was perfect for walking. Still hard and crusty, the going was easy. Under the intense sun, we shed our layers until we were wearing nothing but our shirts. It was a beautiful day.

Thanks for taking us out Michael. Had a great time on the kick sled with Nanuq. It would have been great to have 2 dogs pulling though. :-) I'm a lazy ass. Haha.

When Michael first told me about sleeping outside in the snow about 10 years ago I thought he was nuts. I guess over the years I "warmed up" to the idea. I think since I moved to Whitehorse I've wanted to give winter camping a try. This one night trip to the "outskirts" (3km from the highway??) was awesome and I'd love to do it again. Hopefully my knee recovers soon.

Maybe the mystery is in its name: "la berge", in French, literally means "marge", especially referring to running water (like a river bank).

It was named after Micheal Laberge.