Skijor Power!
While I was travelling, our friends and neighbours helped Fawn by taking Nanuq for walks in the evening. After I got back, my neighbour Heather asked if I would be willing to return the favour.

I was glad to, and suggested that instead of a walk I take her dog skijoring with my dog, since that would give both of the dogs a little more exercise. Later that night, I got her dog and the harness and skied to a level spot of ground behind my house.

I put the harnesses on the dogs and connected them to my harness and said, "Ok, let's go!"

Like a double-booster rocket, the two dogs launched themselves down the trail, towing me behind. The trail curved uphill, but their speed never diminished. I soon realised that I was no longer in control; I was too busy concentrating on staying upright and we zigged and zagged onto different trails.

A few times, on sharp turns, I fell because we were going so fast. I've skijored behind two dogs before, but it wasn't like this. They were loving it and I was hanging on for dear life!

We took a big loop around the tank farm, but the dogs didn't seem to be the least bit tired. I extended our trip, but that didn't seem to slow them down either.

Eventually, I got them headed for home. After I took them out of their harnesses, they ran around like puppies, bouncing in the snow.

It was a great skijor, if not a little hair-raising.
Kicksled Power!
There was a Copper Haul Twister race yesterday. Anissa and her dog, Cosmo, and Nanuq and I drove up to register in the pet dog category. I've been out of town for all of the CHT races so far this year and was glad that I'd finally be able to compete in one.
The temperature was comfortable around 8:30 am, but it quickly dropped. The wind got stronger, which didn't help things. I began to dread how "sticky" the cold temperatures would make the snow. Skiing on it would be like trying to ice skate with sandpaper wrapped around the blades.
After Anissa and I registered for the race, I decided to do something that I've been contemplating since just before Christmas. We took a quick trip downtown and I bought a kicksled. I figured that a kicksled would be faster than skis. Plus, I didn't want to stand around in my ski boots when I could wear something light, warm, and comfortable on my feet. Plus, I could put Jade on a kicksled (when Nanuq and I weren't racing, of course).
There were five people (and five dogs) entered into the pet category.
The race started off well. The competitors start the race in one or two minute intervals. Nanuq and I quickly caught up to the first racer, "Taz", a little dog from Haines Junction. Then, we were overtaken by Jon and his rottweiler. After we were passed by Jon, I stopped to tie my bootlace because it had come undone. I didn't worry about the few seconds that it took, because I knew that Nanuq would want to chase and catch up to the leaders.
That's what he would normally do, but Nanuq had other plans. While I tied my boots, Nanuq looked behind us and saw a dog that he would much rather run with - his good buddy Cosmo.
I kept urging him to chase the dogs in the lead, but he kept urging me to turn around so we could run with Cosmo. It didn't take long for Cosmo to catch up at the rate that we were going (with me trying to go forwards and Nanuq trying to go backwards).
Because of the cold, the race trail was slow. It was hard for Nanuq to pull me, because there was too much friction for skis or kicksled runners. It was just as hard for the other competitors. I had to run as much as I could to keep the sled going.
In the end, we finished the race in fourth place, with a time nearly twice as long as normal. Taz came in fifth. Anissa and Cosmo came in second. 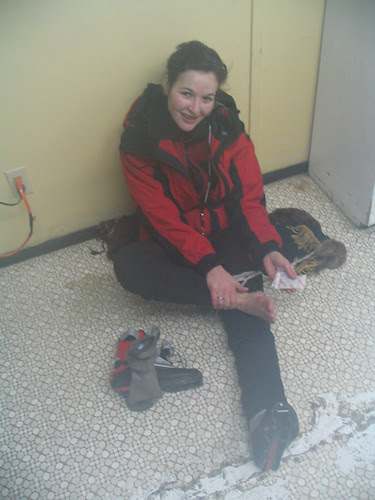 Anissa tends to her frozen toes.
I liked racing with the kicksled and look forward to the CHT race next weekend. Hopefully that race will be a little warmer so the skis and sleds will slide a little faster. My beard got frosty from all the huffing and puffing. It's not easy to run for 5kms in snow pants!

Oh cool! Now I know what a kicksled is! You'll have to take me out one that thing one of these days when the temperature is cold (vs FREEEEEEEEEEZING).

I've always been curious about those. Can you actually move along kicking it? I was thinking it, if it actually works, that it would be good to take to work. (Riverdale-Downtown, flat commute).

I tried one out once and it was awesome! I want to get one to use instead of Cross country skiis (I always get foot cramps when I ski)