Mounting Lorne OR When your partner is otherwise indisposed, is it acceptable to go with someone else?

I was occupied on Friday, but didn't see any reason why I couldn't go on Saturday. We agreed on Mount Lorne as our destination.

Nanuq, unfortunately, couldn't join us. Something has happened to his dewclaw toe; on Thursday night it was deep purple and swollen. We don't know what caused it. I took him to the vet on Friday and he's now on antibiotics, a strict Epsom salt soaking regime, and has to have his foot covered so he doesn't lick it (and, for the first time in his entire life, we've actually managed to keep a sock on him - most of the time). Unfortunately, he is also constrained to short leash walks, which means that he wasn't allowed to come on the hike with us. Poor guy. I don't know if he's being mopey, or if he understands what's going on and is just taking it easy.

I like having a dog with me when I hike because dogs notice things that I might not. It would be strange not having Nanuq with me; I know how to read him when he's got something important to tell me. Luna, Eric's dog, would have to do.

Eric picked me up at 9:00 and we drove to Bear Creek on the South Klondike Highway, where the trail up Mount Lorne starts. It was a pleasantly cool morning, but it would heat up soon enough. The sky was clear and the sun was shining brightly.

I've wanted to hike up Mount Lorne for a while. At 2,021 m (6,631 ft), it's the tallest of the mountains surrounding Whitehorse (and the 36th tallest in the Yukon). On the trails around my house, I've often stopped to stare at Mount Lorne, off in the distance. Every time I looked at the mountain, I got a strange feeling - the mountain seemed enticing, yet somewhat unwelcoming, possibly because it it often looks so big and dark, looming in the distance. Always, the mountain seemed to say, "I'm here. I'm big. I'm looming. Stare in awe at my awesome loomingness."

In spite of the dread that such loomingness could cause, it seemed like there was a small army of undaunted hikers out to conquer the mountain. (OK, I realise that ten people would make for a pretty ineffective army, but when you weren't expecting to see anyone, ten seems like a lot.)

We walked the first four kilometres to an old, roofless cabin, and then walked up through the willows, out of the tree line, to a ridge. Up, up, and up we went. The sun was bright, beating down around us. My normally steady pace was frequently interrupted by the overwhelming urge to take pictures and savour the view; The unrelenting slog during the Yukon Adventure Challenge really helped me to appreciate the value of "stopping to smell the roses". 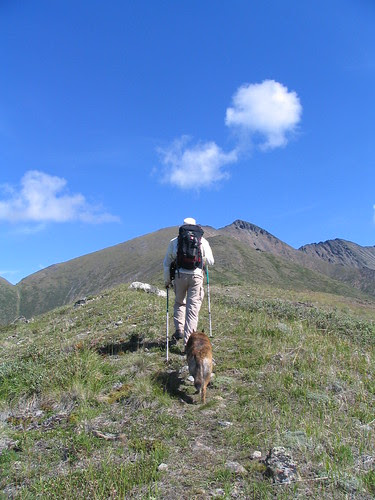 The back sides of Eric and Luna. 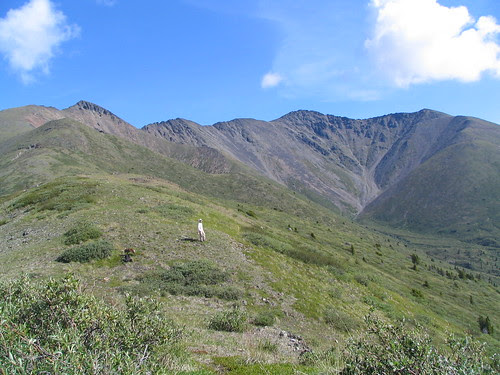 The Mount Lorne "Horseshoe". Can you spot Eric and Luna? What about the party of seven further up ahead? 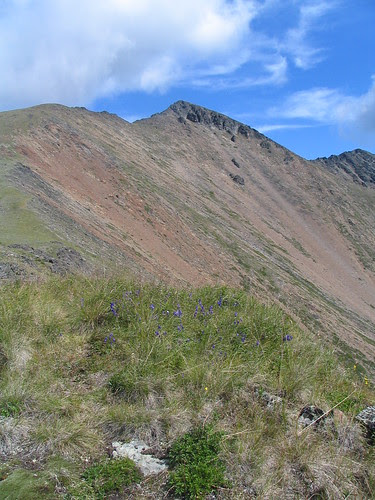 Great tobogganing for anyone with a death-wish. 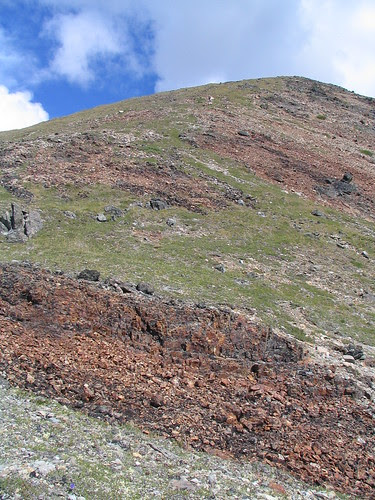 Can you spot Eric and Luna now? (If you're wondering why I seem so far behind, it's because I stopped to have a snack.) 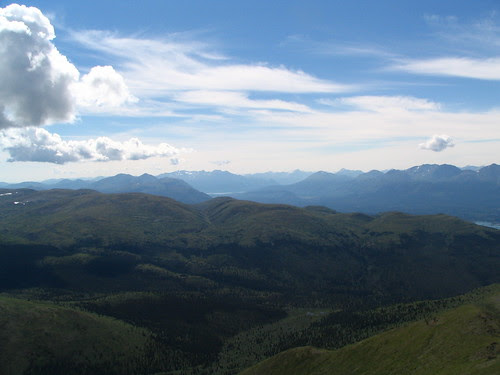 Ahh, the view!
We overtook a group of hikers, five of which were kids, and followed the wide grassy ridge further and further upwards. Suddenly, the ridge became a sharp, rocky spine, generally unsafe for travelling on. We consulted the guidebook we were carrying, which suggested that we skirt around this "minor peak" in the talus. 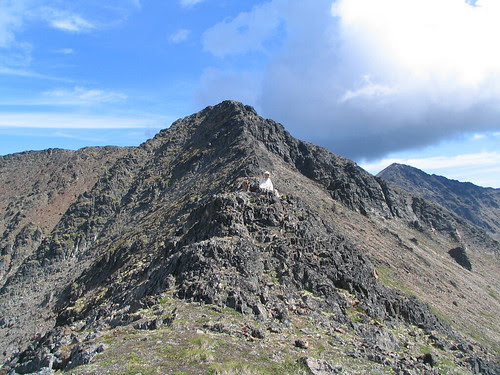 Eric and Luna stop on a narrow ridge to a minor peak. We continued our hike by skirting the peak to the right.

A tobogganing chute with a poorly constructed ramp. (Looking down into the "Horseshoe".) 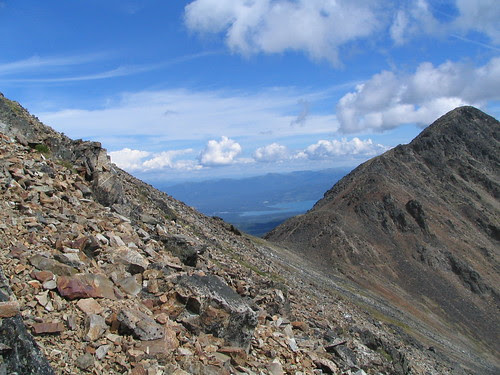 Around and around the peak we go... 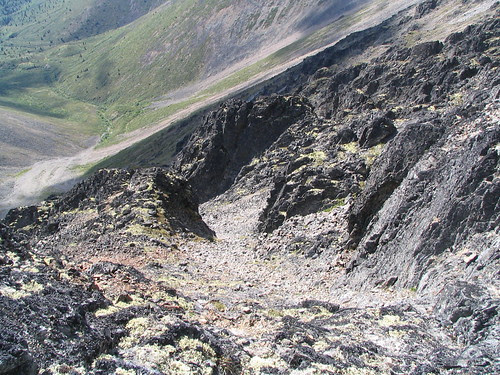 ...where we stop..? I hope to heck it's not down there!
We trod carefully over the loose rock, making our way around the peak. Around the other side, we picked up a switchback trail that led us to the next minor peak - and the next. We could now see Whitehorse and Marsh Lake. For some reason, the view looking northwards wasn't as exciting as I'd expected. Gray Mountain and Canyon Mountain looked small and uninteresting. Whitehorse looked like a big grey blob. The view couldn't compare to the view to the south or the west. To the south I could see Bennett Lake, Mount Montana and the glacier-capped mountains of the Coast Range beyond. To the west, I could see Little Atlin Lake, White Mountain, and the other mountains beyond. The green-carpeted rolling mountains to the west looked inviting and I wanted to go explore their snow patches and hidden valleys.

A rocky trail leading to the main peak (after a couple of minor ones). 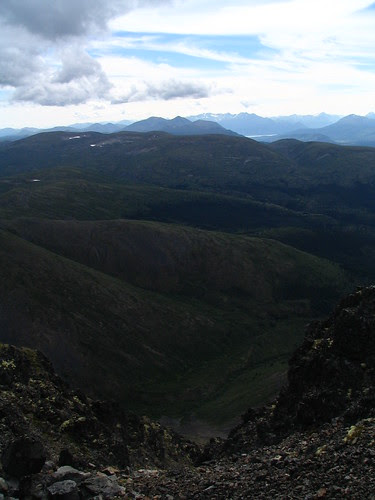 Looking toward Caribou Mountain, Bennett Lake and Mount Montana.
I was now on auto-pilot - no longer thinking about the effort of walking uphill, but walking uphill and thinking about other things - namely, the view. Although it wasn't really, the walking seemed to be much faster and easier, and I was somewhat surprised when we arrived at the main peak of Mount Lorne. 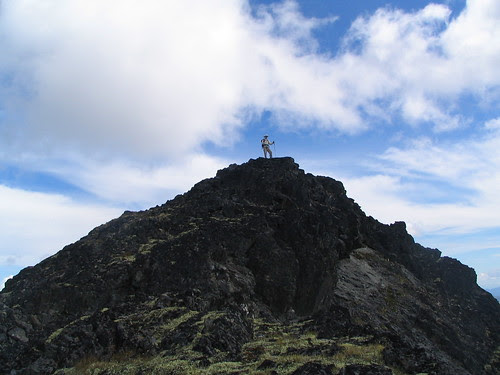 At the summit!
The peak was capped with a large rock cairn. I never understood why people built cairns at the top of mountains - Was the mountain not tall enough already? Did they bury something under the cairn? Did they bring the rocks up from the base of the mountain as a sign of respect? 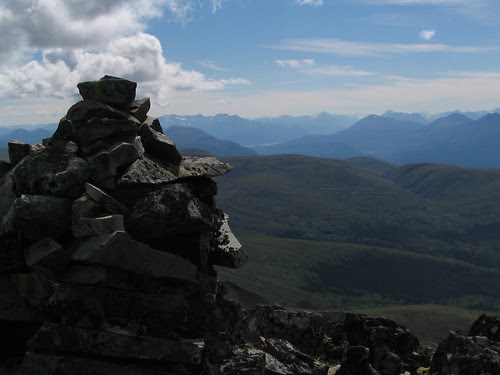 That's a lot of rock to haul up a mountain... 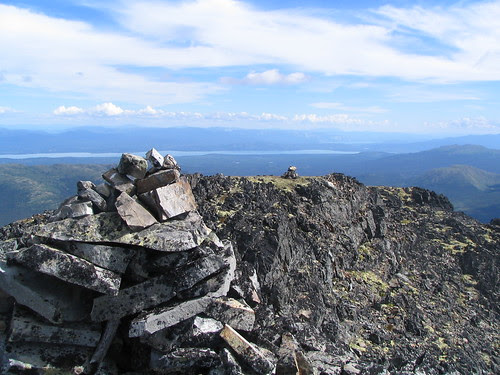 ...but it's not a problem if you're willing to use the local supply. (Looking toward Marsh Lake.)
After reading the memoirs of Hugh Bostock, who worked for the Geological Survey of Canada and who helped map the Yukon, I realised that the cairns were built by surveyors to triangulate distances and elevations from one peak to another. It seems unromantic for the origin of these rock monuments to be so utilitarian, but the romance returns when I think of the "explorers" who helped to chart Canada, and what they had to endure, even just three-quarters of a century ago. 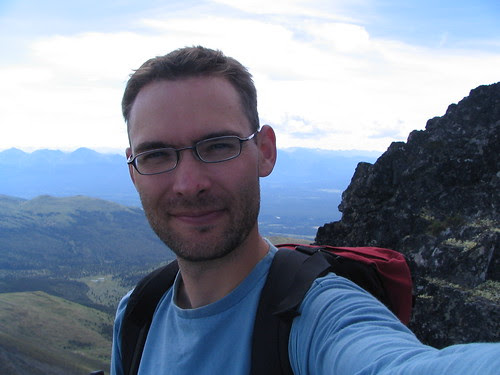 Taking it easy near the top.

We stopped for a short food break at the peak of the mountain, took a couple of pictures, and then headed down the other side. We were walking along the spine of the mountain. It was too steep on either side to be considered reasonable for hiking. One bad step off the spine would result in long and unstoppable slide down the talus. 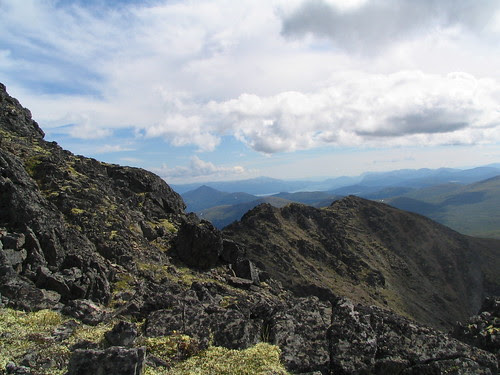 The spine.
As we descended to the next minor peak, the spine became to narrow to be safe. We picked our way carefully down through some black rock "ribs" and talus, attempting to find the quickest and safest way along the top of the mountain. 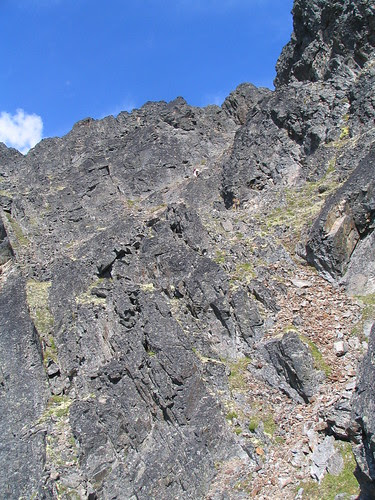 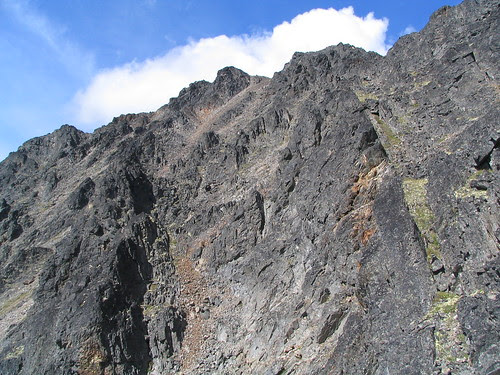 Not-so-easy going. As with most of these pictures, there's no real sense of scale, so they don't do the mountain justice. 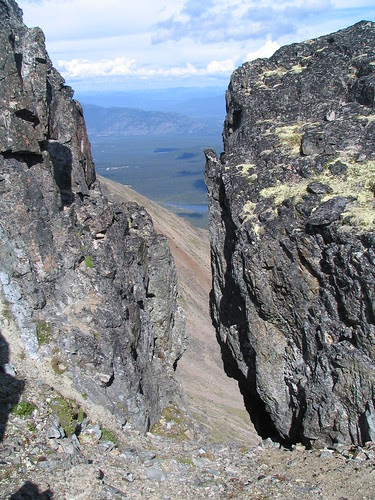 A long, long drop through a crack in the mountain.
Mount Lorne is shaped like a large, lumpy horseshoe. We were attempting to walk the entire length of the horseshoe. We scrambled up and down around the ribs, always aware that one bad move would be, well, very bad indeed. This was the most tiring section of the entire hike. Even though we were, technically, making our way downhill, it was a far cry from the rounded, grassy alpine tundra that we'd walked on for most of our ascent. 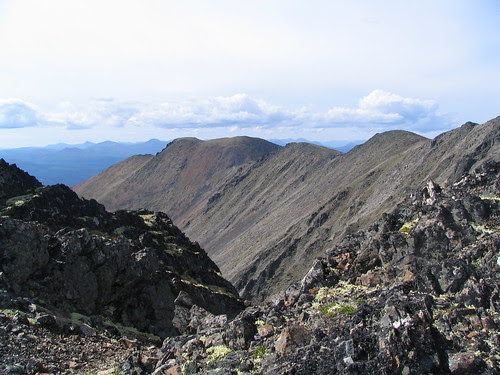 Looking back whence we came.
Finally, the terrain eased. Even though we hadn't gone far, we felt a break was deserved. Eric dried out his socks and I stretched out on the grassy slope. As I lay there, I watched the gentle wind blowing the alpine grasses and the little purple flowers and I felt content. I wished that I could experience this every day - but wondered if I would be as contented if I did. Yes, I figured, I would be. 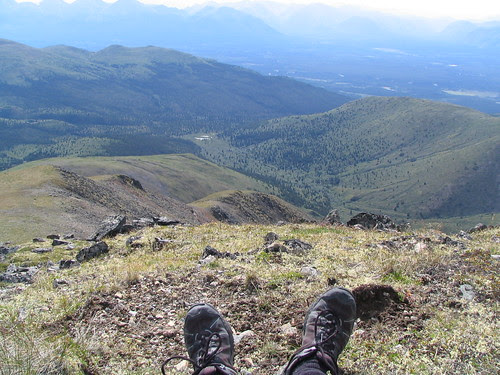 Relaxing on the mountain and enjoying the sight of the grasses blowing in the breeze. (My feet.) 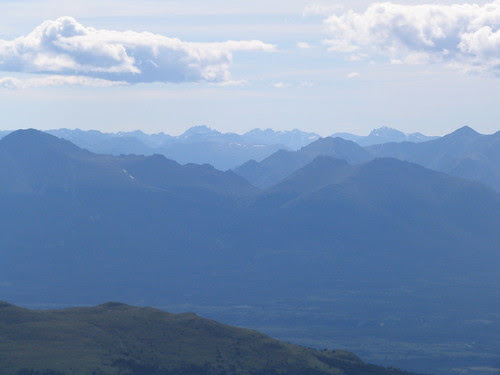 A view of the Coast Mountains. 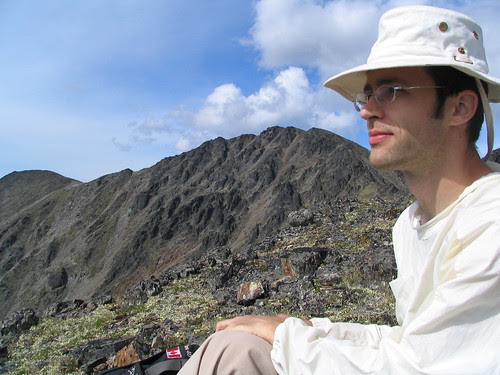 Eric takes a break while he dries his socks. A minor peak rests in the background - it looks so small from here! 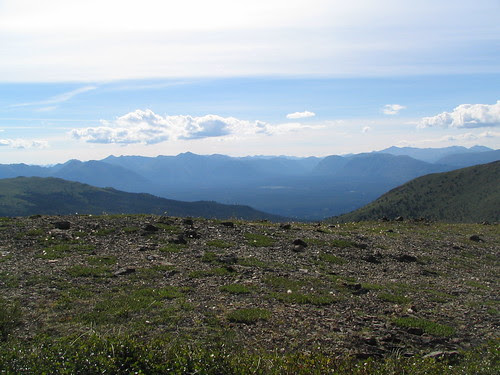 Back to the easy terrain.

Looking back at where we came from.
The guide book was a little unclear about the best route for the descent, and we "shortcutted" down into the willows and scrub birch. After a bit of bushwhacking, we the followed the moose and caribou trails down to the beaver ponds at the bottom of the horseshoe-ringed valley. After hopping a few mossy hummocks, diving through patches of willows, and skipping over a few clear streams, we crossed to the other side of the valley and rediscovered our original trail near the roofless cabin.

The sun shone golden through the trees as we walked back down to the car. On this section of trail, the ascent seemed so gradual that we had hardly noticed. Now that we were heading downhill, looking towards Annie Lake, we had a better idea of how much elevation we had gained on that heavily-travelled section of trail.

At the car, I looked back to see the line of peaks that make up Mount Lorne. It now seemed so smooth and gentle from so far away. It wasn't looming at all. I guess it's like everything that you see from a distance - your imagination builds a picture for you, but if you really want to understand a place, if you really want to experience it, you need to go there yourself.

I'm glad that I did.

Nice post. But did you have to make it so obvious how in-the-gutter your mind was when you created the title for this post? I guess that's what comes of spending the day in bed (working, I know, I know).

My mind wasn't in the gutter when I came up with the title. It was up on the mountain.

And as for spending the day in bed, the house is freezing. It's warm there and I refuse to turn on the furnace - it's only August!