Catnapping on the ground during the Yukon Adventure Challenge reminded me of just how good it feels to sleep outside. This resulted in a hankering - a craving, if you will - to get out and go camping, so, after I recovered from the race, I suggested to Fawn that we go camping - even if it's only car camping. She said, "Sure!"

We got going later than we had planned - it takes a lot longer to pack than it used to for some reason...

When we got to Kusawa Lake, it was well past Jade's dinner and bedtime. We whipped out the Liard Firebox and grilled up a couple of steaks and set up the tent and spread out the sleeping bags. Then, the real work began: trying to put Jade to sleep. 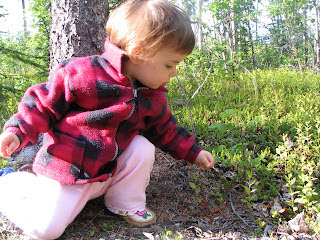 Jade gets right to the business of exploring. 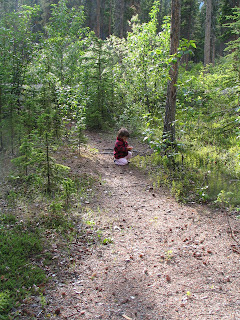 "Hmmm...these little plants look tasty..."
Up well past her bedtime.
She was overtired and overstimulated. She kept crawling around the tent and I was sure her crying was going to bother the other campers, if it wasn't already. Fawn and I took turns trying to put her to sleep. It was past midnight by the time she finally succumbed to the Sandman.

Still, it was a restless sleep. All through the night, Jade kept waking up and wandering around the tent. And there was no sleeping in for any of us.

It didn't matter though. It was great to be out, even if it was only car camping in a territorial campground. Watching Jade take everything in was like seeing the world through new eyes.

The more I watched her, the more I realised just how much we have in common. She was interested in everything. Exploring the world around her, she'd wander off with barely a care about where her Mom and I were or what we were doing. The trails were merely a suggestion, and the interesting stuff wasn't on the trails. Nothing curbed her enthusiasm, even when she fell into a wild rose bush. 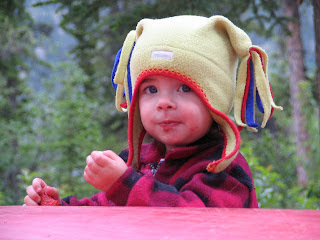 Hanging out by the canoe, eating a Strawberry. What could be better? 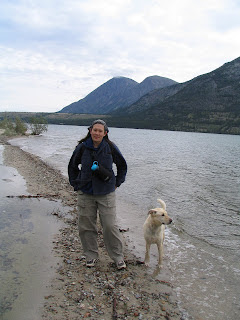 A morning stroll along the shore of Kusawa Lake.
Later that afternoon, around her nap time, we went canoeing up the lake. The wind was gentle and the lake was calm. Just like when we canoed the Takhini last year, Jade fell fast asleep in the bow. We paddled for a couple of hours before turning back. Jade woke up and we gave a plastic gold pan with some colourful rocks from the beach to play with, as was suggested to us by a paddler that we met on the Takhini last year. It seemed to do the trick! 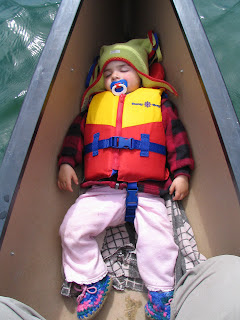 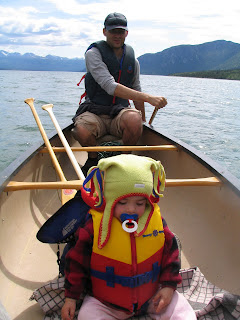 A little coureur de bois in training.
The rest of our time was spent preparing meals and watching Jade explore the world around her. To our surprise, she went right to sleep when Fawn put her down for the night. Fawn and I spent the rest of the evening tidying up the camp and making bannock on a stick. It was nice. Really, really nice. 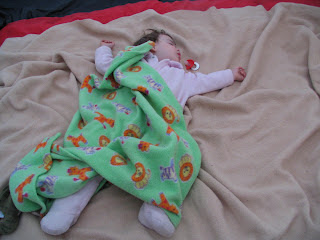 Sleep. Precious sleep. (Taking up most of the sleeping bags)
Fawn slept well that night, but our little monkey kept rolling into me. Not wanting to wake her up, I found myself pinned in a very uncomfortable position inside the sleeping bag for what seemed like hours. Probably because it was hours. It was worth it to not wake her up, though. A well-rested baby is a happy baby. 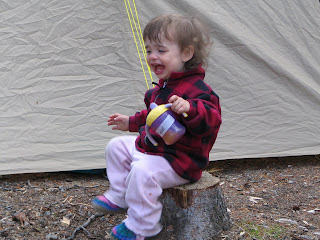 The next morning, we struck camp and went for a little hike up an old mudslide behind the campground. There's a lot more in the area that I'd like to explore, but that'll have to wait for another day. Maybe I'll bring my little explorer along with me when I do.

Great to see new photos of Jade. Is that the "daycare" jacket? She looks soooooo cute!