Nahanni Butte and back.

The little KIA Rio was not a very comfortable car, compared to our Volvo. While it's a peppy little thing at low speeds, the engine whines in pain when the car exceeds 100 km/h. Save for the steering, it doesn't have power-anything: no power-locks, no power-windows, no air conditioning, and the CD player only sort-of-worked most of the time.

I left Whitehorse on Friday night, hoping to put a few miles behind me to break up the trip a little. The trip from Whitehorse to Nahanni Butte can be done in a day, but it makes for a very long day. My plan was to drive for as long as it was safe to do so (before I got too tired or before it got too dark to see the wildlife) and then sleep in the car. I had packed blankets in preparation for a night on the road.

The occasional stop actually seems to make the trip go faster. It's certainly refreshing to hop out of the car and run around for a little while, and I find that I'll be less tired when I get to my destination. With this in mind, I planned to find a few geocaches and check out a couple of the falls along the Alaska Highway. The Alaska Highway has lots of great scenery and places to see along the way - it's anything but "just another highway".

I stopped for one geocache near Spencer Creek, and a took a quick run to finally see the Rancheria Falls. I have to confess that the falls were a little less dramatic than I was expecting, but they were still pretty in the waning light. 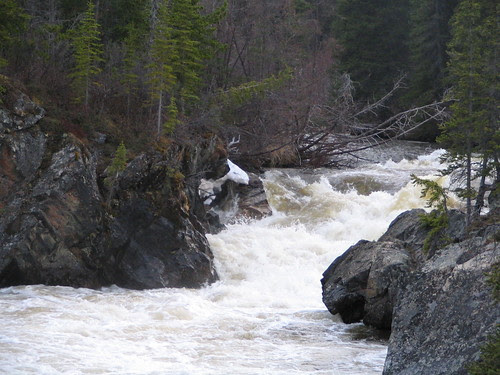 Rancheria Falls
Save for a very cute red fox cub and the usual ravens, there wasn't very much wildife along the highway, which was not entirely unusual on the stretch that I was on. I was entering bison country, though and it was now dark out - at least as dark as it gets at this time of year.

Feeling myself getting sleepy, and not wanting to risk a run-in with a big ol' buffalo, I pulled off at a rest stop near Fireside. During the day, the rest stop has a nice view overlooking the Liard River. There were a couple of RVs that had already pulled in for the night and I wondered if these same travellers would be spending the night in the Walmart parking lot once they hit Whitehorse.

The KIA was uncomfortable to sleep in. While I understand why they put the lump in the middle of the back seat, I'll never understand why they feel they have to make it so big. Scrunched up in the back, I desperately wanted to stretch out my legs, but the car just wasn't wide enough. I briefly considered rolling down the window and hanging my legs outside before I remembered that the rest stop also had a litter bin, which would likely draw bears to the area.

I didn't sleep long, but slept deeply. I was up at 5:00, refreshed and wide awake. The RVs were still there when I pulled onto the highway.

In the morning light, bears and bison grazed along the side of the road. Other than their company, it felt like I had the highway all to myself. I pulled off at the Whirlpool Canyon rest area. While I didn't see any whirlpools, the rapids were large and impressive, as were the rocks along the shore. I would have taken more pictures, but my camera batteries decided that, at that particular moment, it was time to die.

Whirlpool Canyon on the Liard River 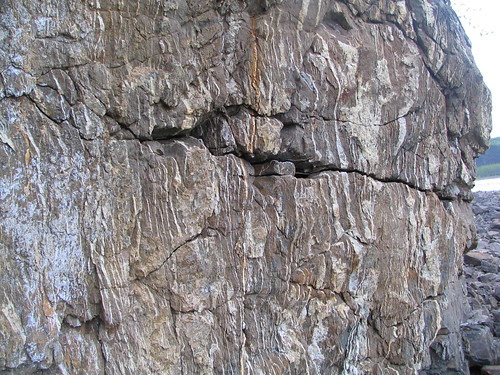 A very veiny rock near Whirlpool Canyon.
Back in the car, I drove a little ways before turning off on the Smith River Falls road. It seemed like every time I drove by this road, I could never get in to see the falls - either the snow was too deep or I just didn't have enough time. Finally, I did. I turned on my GPS and went on a hunt to find the geocache that's hidden there. I found the geocache fairly quickly, but it was the falls that really captured my attention. Unlike the Rancheria Falls, the Smith River Falls were much, much larger than I had expected. The spring flood surged over the drop, carrying with it large trees and other debris. The thunder of the falls filled the valley, as did a fine mist. I juggled my batteries between my GPS and my camera, knowing that I didn't have much of a charge left on my remaining "double-A"s. 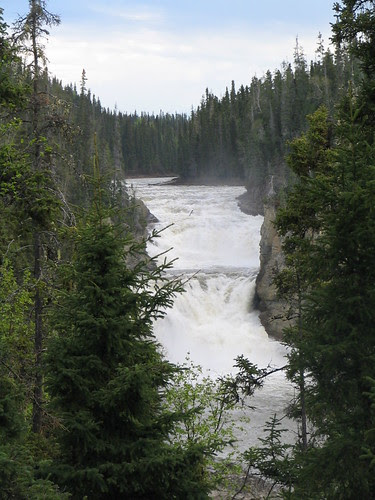 Smith River Falls
Back on the highway, I stopped to admire Folded Mountain, and then again at Toad River for some brunch and gas (for the car). I didn't stop again until I pulled into Fort Liard to visit some friends and to spend the night. 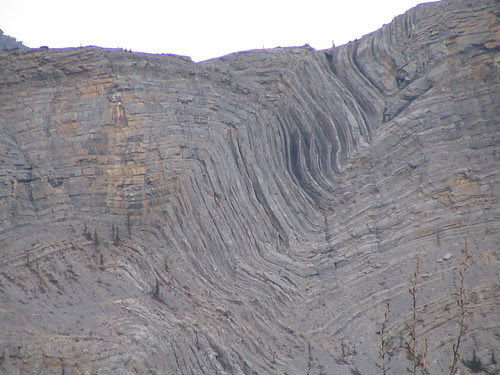 I managed to squeeze a little bit of visiting in, however. When looking at the rental car, some of the guys in Fort Liard called the KIA "Killed In Action". I thought this was a good name, and have had a hard time thinking of it as a KIA since. 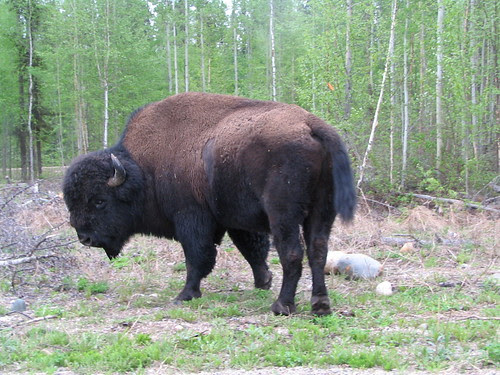 Not a fellow I'd like to run into with the KIA. 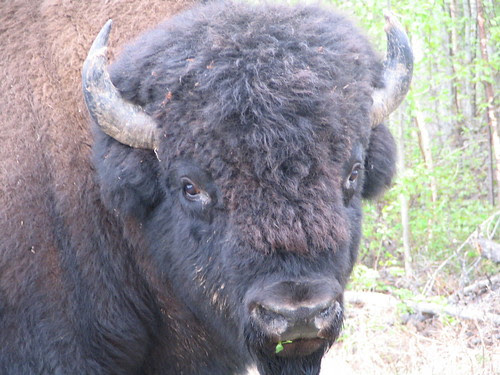 "I look all cute and innocent and then, when you least expect it, I go roll around in your garden."
I was on the highway again just after 18:30 and made it to Blackstone Territorial park for 19:00, where I waited for my river taxi. Because it had been raining, and because the gravel highway was thawing, there were a lot of soft spots and the little car, with its skinny tires, swerved from side to side. Because the river's water level was high, the boat had to do the same as we dodged trees and other debris.

It was sweltering hot in Fort Liard, but the temperature had dropped considerably with the rain, making the boat ride a cold one. I was dressed for it though, and no matter how cold or wet it might get, I always love the boat ride into Nahanni Butte.

I grabbed my camera to take some pictures, but it had somehow stayed open after my last picture in Fort Liard, and the batteries had died. Disappointed that I would have no pictures from this trip, I contented myself with my "back-up camera". I hope my memory never runs out of batteries.

I was in Nahanni Butte for five days. It was a good and productive visit, and it was very nice to be back. Elsie, one of the community elders, made a pair of crow boots for Jade. I was incredibly touched, but she must have found it a little creepy when I kept holding them up to my nose, sniffing deeply. There's nothing quite like the smell of tanned moosehide. I'll post pictures of Jade's new shoes when I've got them.

I hid a geocache while I was there. It was fun to see a few of the local guys search for it. They finally found it, but not without a few adjustments to their GPS. While I was there, I also went for a walk to the Little Butte and took a boat ride to the spring at the base of the mountain. Normally, I don't like the taste of water, but spring water is an exception. It was cold and delicious.

The week went by quickly, and on Friday night I caught the river taxi back out to Blackstone, stopped for gas and a few more quick visits in Fort Liard, and hit the highway, ready for another night in the car.

There is a section of the Alaska Highway that is referred to by some as "The Serengeti of the North", on account of the wildlife. As a full, red moon rose up into the darkening sky, I began to wonder if the animals were having a convention. I lost track of the sheep, elk, moose and caribou that were loitering around or on the road. It was easy to see the bright white bums of the elk and sheep, and their eyes shone brightly in my headlights, but after a hare ran into the road and decided that it would try to race my car, I decided it was time to stop driving for the night. Though the hare tried, it was not faster than my car. The little car bounced a lot more than I had expected it to and as I mourned for the hare's premature death, I shuddered at the thought of what a moose could do the car. 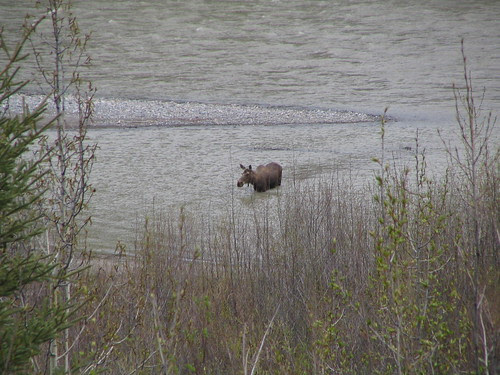 Toad River moose crossing.
I pulled off at Summit Lake and curled up in the back seat, falling asleep within seconds.

Again, I woke early, and I was glad that I did. While it was cold at Summit Lake, I knew it would be getting hot later in the afternoon and driving a little black car without air conditioning is not very fun for someone who does not like heat. I drove past Toad River, keeping my eye on the gas. It was now 6:00 and still too early for the gas station to open. I decided to stop for a while and hike up to a water fall that plummeted off a cliff above the highway. It was a beautiful spot, and I could see up and down the narrow valley where both the highway and the river wound like ribbons. A large alluvial fan was spread out below me and I could see sheep grazing along the road. 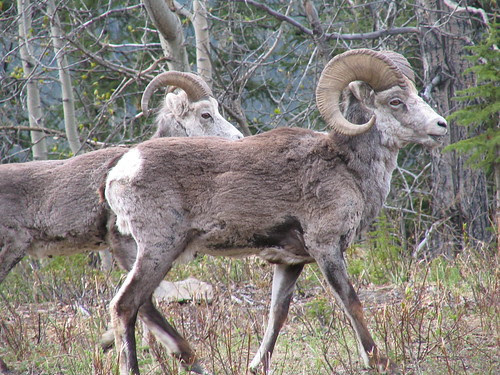 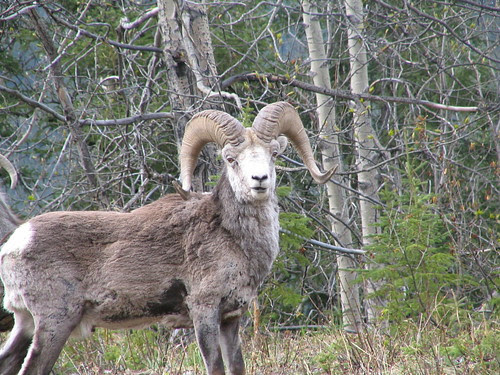 I'm trying to decide if his expression is more Rodney Dangerfield "I get no respect" or more Robert Deniro "Hey, you talkin' to me?"
I washed up in the clear, cold water, feeling instantly refreshed. The wash must have suppressed some of my slept-in-a-car-overnight stinkiness, because it woke my nose up to other smells, namely the smell of woodsmoke.

As I drove further and further down the valley, the smoke got thicker and thicker. Finally, near Peterson Creek, things cleared and I could see the patch where the smoke was coming from. I couldn't see any fire, but you know what they say; where there's smoke...

I pulled into the Northern Rockies Lodge at Muncho Lake just as they were opening, informed them of the fire, and called the BC forest fire hotline. I was glad I had gotten up as early as I did - getting stuck on the highway because of a forest fire would have really sucked.

I stopped for a tiny bit of gas (it was expensive) and a large breakfast (a good deal) at "Trapper Ray's" at Liard River. I wasn't making any hotsprings stops on this trip, since I was eager to get back home and see Fawn and Jade again.

It was getting hot out and I drove in nothing but my shorts. I filled up in Watson Lake and didn't stop until I got back to Whitehorse.

It was a good trip. I saw more wildlife than I had ever seen along the highway (which can be a good thing or a bad thing, depending on how you want to look at it) and got to stop at a few of the places that I'd been curious about on other trips. Of course, on this trip, I spotted many more places that I want to investigate. I guess I'll just have to make another trip!