My Grade 2 class was a living hell. Certainly, there have been worse living hells in human history, but at the time, to any normal seven year old, it was a pretty darned miserable experience.

It was because of our teacher, Mrs. Looney1. She was so strict - so fearsome - that students would rather wet their pants than ask to go to the washroom. There was a lot of squirming in her class; you could say it was because all the kids had to go pee, but really, it was because they were squirming in fear. My bladder grew two sizes that year but, yes, there were times that I peed my pants too.

I wore my sweaters around my waist a lot that year.

And though its intended purpose was to punish kids for crimes that they never quite understood, I came to relish my time in the "resource room". The books in the resource room were much more interesting than listening to Mrs. Looney, yet again, shriek at some confused kid and, best of all, Mrs. Looney wasn't there.

Looking back, I now believe that Mrs. Looney's motto was "Education through punishment".

Time went very slowly that year. Time goes slowly for any kid, but it went extra slowly in my Grade 2 class. I often wondered if Mrs. Looney was a witch - she certainly looked like a witch, and her Hallowe'en costume that year was a tell-tale pointed black hat. And I often wondered if she had some strange magical power that slowed down time.

I wasn't the only one who felt this way, so when Mrs. Looney declared, "It's the shortest day of the year," the class became noticeably excited. The kids looked around at each other, beaming, reading each other's thoughts.

"We're getting out of school early today!"

Mrs. Looney smiled a wicked, evil smile as she revealed that the school day would be just as long as it ever was, just that the time between sunrise and sunset was shorter than any other day of the year. The excitement in the classroom fizzled like a bad match.

It was years later before I really came to understand why the day was "shorter", and living in Saskatchewan and Ontario, you don't really get to see it like you do in the north, with its dramatic shifts in light. And though my first "exposure" to the shortest day of the year was a bad one, I have since come to love the Winter Solstice.

So, forgive me for my nerdiness, but I have been tracking Whitehorse's sunrise and sunset since December 21st of last year. Jotting the times into a spreadsheet, I have produced the following graphs: 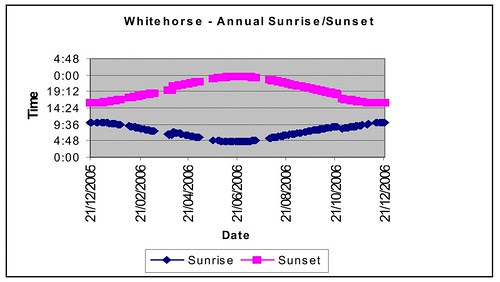 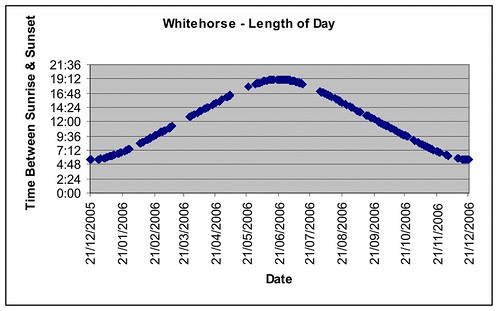 Today, the sun rose at 10:09 and it will set at 15:47, giving us five hours and thirty-eight minutes from sunrise to sunset.

From now on, the days will get longer until we have gained an additional thirteen hours and thirty-two minutes by the summer solstice, making the days nineteen hours and ten minutes long.

1 Name slightly (but only very slightly) altered for fear that she should come after me.

Email ThisBlogThis!Share to TwitterShare to FacebookShare to Pinterest
Topics: daylight

I have a great love for excel graphs and the weather, so this post pushes the buttons on many levels for me.

Mrs Looney sounds a lot like my grade 8 Maths teacher - Mrs Dragon (also changed) - who was a tyrant and a bully. We got our own back as a class eventually by collectively scoring no more than 30% on a particularly important test...and she was demoted to teaching the grade 7s. Teehee.

I've been reading your posts for quite some time but this is my first comment.

I guess everyone has had at least one Mrs. Dragon or Mrs. Looney. I don't know what ended up happening to Mrs. Looney, just that we didn't manage to rally against her. I feel for my brother, who also had to suffer through her torturous classes.