We're going out of town to visit my grandparents and to attend a friend's wedding. Instead of taking the pets with us and leaving the house empty, we invited a friend from Fort Liard, Robert, to come live in the house and care for the pets while we're gone.

During his first day here, we were in my home office, setting up his computer on the network. Jade and I were sitting on the floor, while Robert was seated at the desk. Intensely interested in what Robert was doing, Jade was staring up at him, as if mesmerized. With a fixed gaze, she began to rise from her seated position into a full standing position. There was nothing to support her, and she wasn't pulling herself up onto anything. Just stood.

Obviously, this is not something we have ever seen her do before. She held this position, and her stare, for about ten seconds (adjusted from the EDCS1, which measured about 45), before slowly lowering herself down into a seated position again. She was gazing so intently at what Robert was doing that I don't think she even realised what she had done.

She certainly didn't see me staring at her with my jaw hanging open wide enough for a moose to walk into it.

Since I wasn't able to get a picture of this momentous occasion, I have provided the closest comparison I could find: 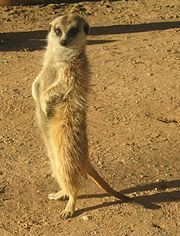 Maybe you've been watching too much "Meerkat Manor"??

I've only ever seen part of one episode of "Meerkat Manor" and enjoyed it, but I didn't enjoy it as much as "Ground Squirrel Shanty", where those cute little ground squirrels taunt the neighbourhood dogs (Nanuq) before diving into their sandy shelters.