The Watson flows south down the valley between Whitehorse and Carcross, although where we started paddling is much closer to Carcross than it is to Whitehorse. The South Klondike Highway was slushy and, at one point, we pulled over to make sure that the driver of a Fort Mustang GT (with custom rims and inappropriate tires) was OK. The vehicle had gone off a steep bank and into some poplars. It was difficult to see through the tinted windows but, fortunately, there was nobody in the car.

I read about the Watson in Ken Madsen and Peter Mather's "A Guide to Paddling in the Yukon". The book is attractive and quite entertaining, but I was somewhat disappointed by the level of detail on how to access the river. I still don't know if we took the correct road. In the end, I think that we pretty much drove down somebody's driveway, and we most definitely cut across their yard.

After some car shuttling, we were back to the launch point. The Watson looked like it wasn't much more than a large creek, but it was, indeed, the Watson. The three of us got comfortable in the 17'4" Discovery and we were on our way.

The water was clear and the current was steady. The clouds were lifting slowly, allowing us glimpses of Caribou Mountain. We slipped around the many bends and over sand and gravel bars, all of which were clear in the aquamarine coloured water. Although some might have thought us crazy, it was a beautiful day and we frequently commented on that fact. 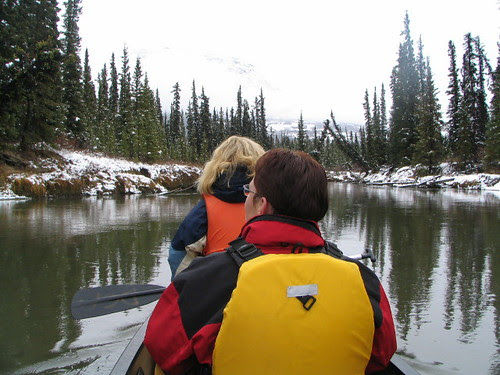 Enjoying a beautiful day.
Although Cheryl was worried that we wouldn't, we saw a bit of wildlife, including:Generally, though, we were talking a little too loudly to see any moose.

The water level was fine on most parts of the river, but was low in others, which resulted in a bit of bumping though a few mini rock gardens. We had to portage over one log jam, which was the easiest portage I've ever had; the canoe acted like a toboggan across the snow. 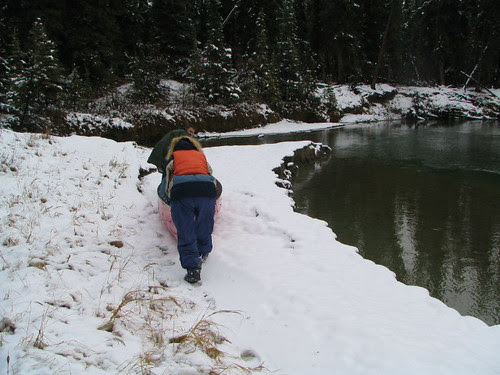 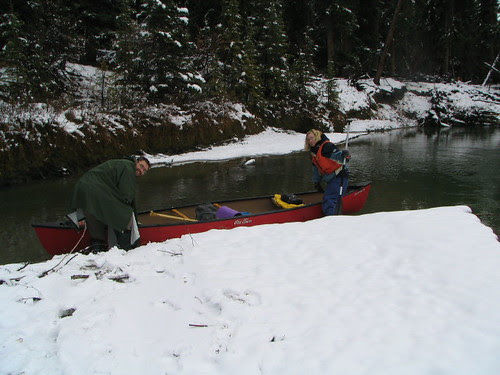 "Did you break a sweat? 'Cause I didn't break a sweat."
As we approached Bennett Lake, we came upon a canyon and decided to scout it out. The canyon, for the most part, looked fine, but there was a diagonal ledge that I wasn't comfortable attempting with three people in the canoe. Cheryl and Juanita collected the gear for a portage while I prepared to track the canoe into the canyon and around the ledge.

I changed into some shoes more appropriate for the job and rolled up my pants. I tucked my gloves into my pockets so I could more effectively manage the track line I had fastened to strategic points on the canoe. I then asked Juanita to get a fire going in the firebox when she got over the portage. As comfortable as I was when I was dry, there was a strong possibility that I was about to get very wet, and I knew that a nice, warm fire would go a long way towards unthawing any soggy bones.

As Juanita and Cheryl departed on the portage, I guiding the canoe over a mess of rocks. While I am fond of the Discovery's nearly indestructable hull, I am always less than pleased with how it handles when tracking. It is an unresponsive beast when compared to my prospector-style cedar strip, which is nimble and seems to dance to where I want it.

Now along some deeper water, I tried to slip the canoe further out into the current. It wouldn't budge, so I tried weighting the hull with some rocks. The canoe was still unresponsive. In the end, once I was past the ledge, I tossed the rocks out, hopped into the canoe and paddled through the standing waves, around the occassional sharp boulder, and out of the canyon. 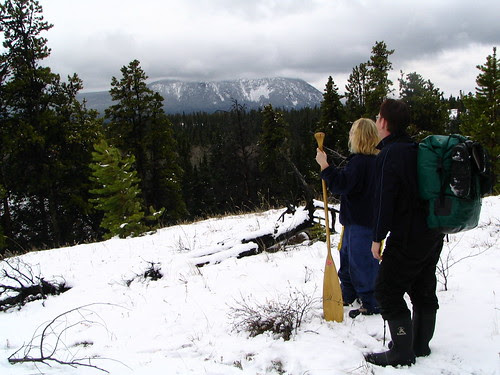 "The top of the portage."
It was a small canyon, and I emerged just as Juanita and Cheryl were unloading the gear from their first portage.

We never did build that fire. Instead we had a quick snack and I changed into some drier footwear. Feeling warm from our portage, we hopped back into the canoe and proceeded onwards into Bennett Lake. 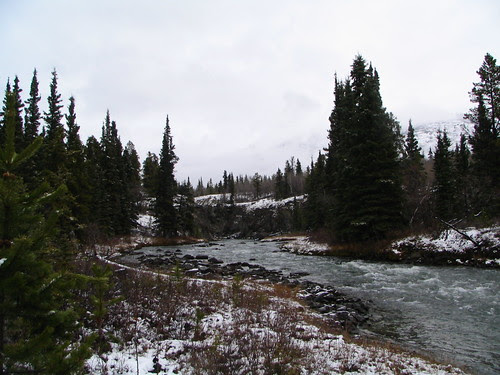 Looking back at Caribou Mountain and the end of the small canyon.
On Bennett Lake we drank in the mountain views, the details of each crevice and boulder showing dramatically from the recent snowfall. The clouds were dramatic, obscuring the tops of the mountains, boxing us in between the mountains, the sky and the lake. The lake was surprisingly calm as a good breeze carried us along the shore back to my waiting car.

Today was the first time I've been in Carcoss (instead of by it). It's a pretty little community and has a lot of charm. And there's definitely a lot to do in the area with Mount Montana, the sand dunes and the lakes. I left thinking, "This is one area I've got to get out to and explore some more."

And as for canoeing post-snowfall? I'll probably do that again, too. Maybe next year.

Email ThisBlogThis!Share to TwitterShare to FacebookShare to Pinterest
Topics: canoeing

:-( i want nice fresh snow in october like that. we just get lousy miserable rain until january.

what kind of opportunities are there for guitarists/computer engineers up there?