Jade didn't seem to mind being in her lifejacket in the pool at the Canada Games Centre, in fact, she even seemed to like it. It was with great hope, therefore, that she would be equally receptive to being in her brand new life jacket for a trip down the Takhini River.

You can see just how impressed she was. Of course, I think I would be equally impressed if I was wearing a bunch of padding that pushed my cheeks up into my face. 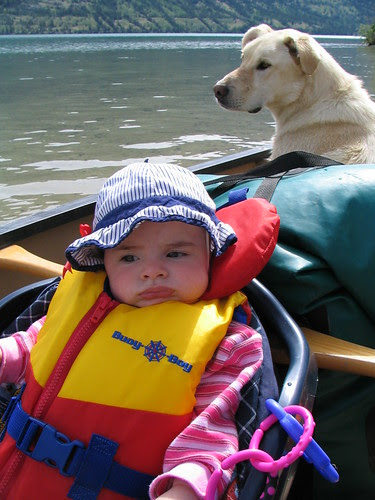 Jade, obviously unimpressed that her lifejacket says "Buoy-O-Boy" and not Buoy-O-Girl.
After some initial fussing, which I thought might be because of the lifejacket, but which turned out to be because she was tired, she was a little angel. Fawn put her down in the bow of the canoe, where she could keep an eye on her. Jade slept though the little standing waves and larger rocks on the river. She only ever woke up when we stopped the canoe in an eddy or on shore. 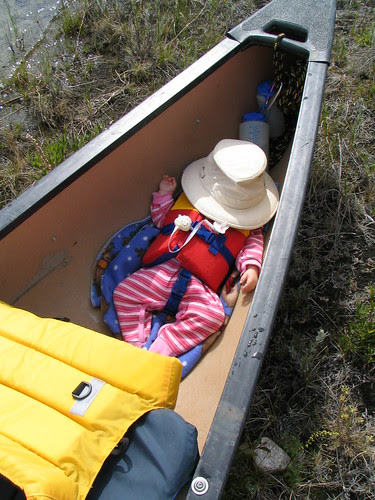 Fawn sacrificed wearing her hat so Jade could be in the shade.
At the rapids, which were wilder than the last time I went because the river level was higher than usual, a nice man named Walter helped me paddle through. I could tell right away that he knew how to run rapids like he knew how to sign his own name. He was good and I really appreciated the chance to run the rapids (without the baby in the canoe, of course), but I didn't appreciate the way he took the canoe through some standing waves at the end of the run (and got me drenched), which I'm certain he did intentionally. Ah, what am I complaining about. It was so worth it. Thanks, Walter!

From there, it was just a little paddle to our take-out point and, again, Jade slept through it all.

Will paddling with a baby always be this easy?

that's an adorable shot of her in the bow of the canoe!!! :)