I was tempted to call this entry "Getting Tripped by My Dog, Walking Through Swamps, Getting Baked in the Sun, Diving Through Willows, Cooking in the Sun, Getting Ready to Drink Questionable Water, Pushing On When I Wanted to Stop, Getting Eaten by Blackflies & A Dozen Other Reasons Why Today Was Fun".

My neighbour asked if he could join me, but I thought that it would be good if Nanuq and I had a day alone. And my neighbour is glad that we did.

The trek started with a walk up the Coal Lake road. The sun was strong and the air was still and, consequently, I was hot. Before I left, I couldn't find my large water bottle, so I settled on the small one and one for Nanuq. Halfway up the road, with my bottle half empty, I wondered if I shouldn't have looked a little harder for the other water bottle. 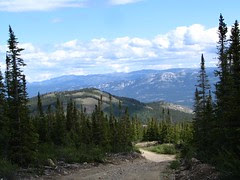 Looking down on the Coal Lake Road

Thanks to the almost constant incline and millions of loose potato-sized stones, the walking could have been easier, but it certainly wasn't impossible. It's true what they say, though, about not driving the road unless you're using an ATV or very good 4-wheel drive vehicle.

Peering off onto the side of the road, I spotted a lot of of little "lean-to"s. Judging by the ground cover, I guessed they were made in the winter time. If anybody reading this knows who made them, I'd love to find out. Some of them are quite good.

We also passed some grouse on the way up the road. Finding them was pretty simple. It's always easy to find a chicken when it's flying at you from the side of the road, flapping all around you in an impressive display aimed at distracting you from chicks that are going "peep! peep! peep!" and running into the bushes, drawing attention to themselves. I could have reached out and grabbed one of the hends and I'm surprised Nanuq didn't.

After getting accosted by several chickens, we continued up the road until we were above the treeline and into the brushline. Leaving the trail, Nanuq and I struck-out towards the peak of Golden Horn through the scrub willows and dwarf birch. For the first little while, I hopped from hummock to hummock, trying to stay dry, but when I saw how easily Nanuq was walking through the water, I gave that up and stepped right it. It made the going easier, but pushing through the willows was still required. 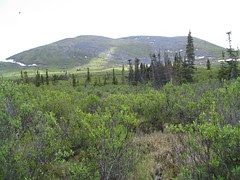 Relying on an old trick he picked up last year while walking through willows with a dog pack on, Nanuq stayed as close behind me as he could, allowing me to push the brush out of his way. I can't stand this for two reasons, the first being that when I lift my leg to take my next step, my heel collides with his jaw. This happens every third step or so. I worry that he's going to get hurt. The other reason I can't stand it is because every ninth step or so, I almost trip because of it.

I have politely asked him to stop. I have also screamed and yelled (the squirrels thought I was crazy), but Nanuq ignores my polite requests and only cocks his head when I yell, as if to say, "Hey! You're crazy if you think I'm going to find my own way through this stuff! You brought me here, you figure it out!" 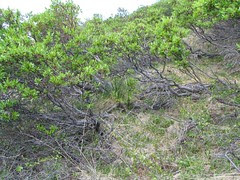 Willows growing sideways on the slope.

So far, the going had been, believe it or not, easy and enjoyable. Bugs buzzed all around, but none were biting. The shoulder-high willows made it easy to wipe them off my arms. The air under the willows was cooler than it was in the open areas. 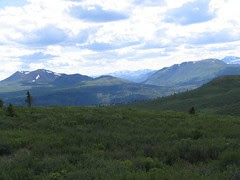 Looking back into the willows. 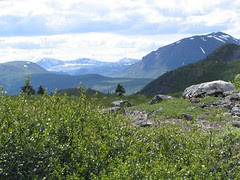 Yet another great view.

Finding a grassy patch, just above the tall willows, Nanuq and I followed it to a little crevasse, where some of last winter's snow remained. Stopping for a quick break, I drank the last of my water from the water bottle and filled it with some water running down a creek in the crevasse. "Should be OK," I figured. "What's the worst that could be in it? A little bit of beaver fever and some 1,000 year-old caribou droppings?" Not really knowing the source, I decided to save the water for a desperate situation. 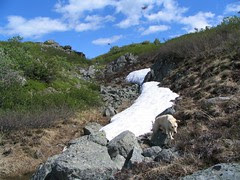 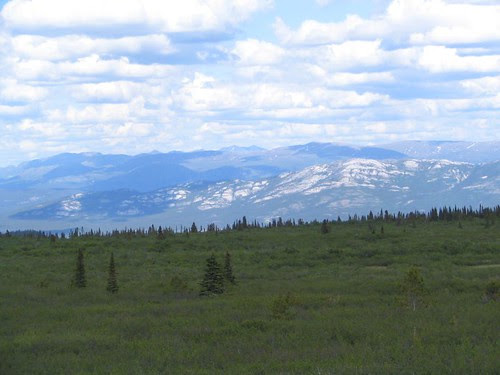 Looking down on Gray Mountain
From here on, the going was up. As I climbed though, the anticipated "thermocline" and its cool air never materialized. The air remained hot and still and the blackflies started to bite around and in my ears. 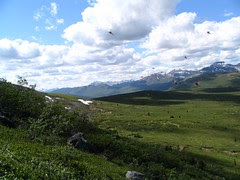 The sun beat down on me and the blackfies crawled into my ears. I was hot and wanted to sit in the shade of a boulder and take off my had, but I knew that if I did, the blackflies would eat me alive, leaving trails of blood and purple spots all over my arms and face. I didn't bother getting my bug jacket out, because I knew the blackflies would find their way in anyways. If you haven't guessed by now, I don't mind mosquitoes, but I hate blackflies. 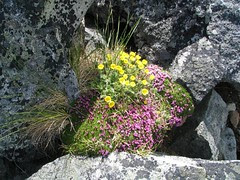 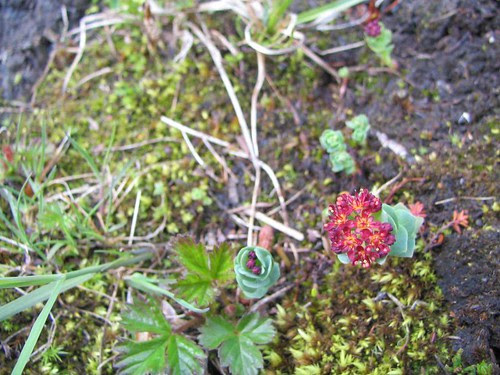 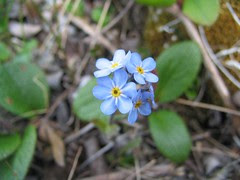 And yet more cute little flowers.

So, ignoring the heat and brushing away the blackflies, I pushed onwards and upwards, stepping cautiously into the dwarf willows, wary of boulders hidden by the blanket of tiny leaves. I started hoping, praying, that a breeze would pick up or that I would hit that layer of cool air that belongs near the top of a mountain. Neither made their presence known.

Walking past a snow patch, I grabbed some of the damp snow and made a snowball. I threw the first one against a rock and kept the second for mopping down my neck, face and ears. The cold snow on my neck, mixed with sweat, made a nice thick layer of moisture that the blackflies couldn't seem to get through. I walked upwards with my ball of snow and only dropped it when I felt cooler and more refreshed. Nanuq ate what was left. 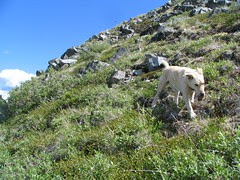 Nanuq along the mountain.

It was hard to balance my attentions between Nanuq, who was for some reason constantly stopping in front of me, the amazing views towards Whitehorse and Lake Laberge, the rocks hidden under the willows, and the blackflies creeping into my ears and hair. And I was hot. 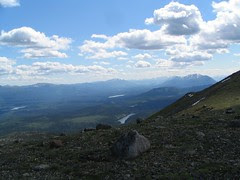 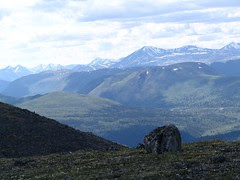 Will the spectacular views never quit?

Now, I could enjoy the breeze and everything that it meant. The bugs started to blow away, though some were still hanging out on my lee side. I could finally stop for a snack and feel comfortable. I peeled three eggs that I had hardboiled before I left, feeding one to Nanuq and eating the other two myself. I was not so much thirsty but hungry. I pumped some more food into me and felt ready to climb another mountain.

As you likely already know, being on top of a mountain is pretty great. As I ate my lunch, I watched a bush plane fly over Coal Lake on one side and a larger passenger jet flying into Whitehorse on the other. I was looking down on both of the planes. 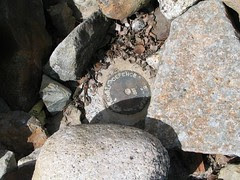 Survey pin at the peak.

The walking was easy on the alpine tundra and, even if I didn't locate the cache, I knew that the trip was worth it, partly for the chance to explore somewhere new, partly for the opportunity to have some fun being challenged, and partly for the astounding views all around.

Plugging the geocache's coordinates into the GPS, Nanuq and I walked towards the peak of the mountain. Not too far from there, we found the cache, hidden in the kind of location that Average Joe on top of the mountain would never find, but a cacher would. 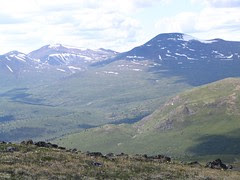 Another great view. Sheesh.
From the cache, I spotted an easier, but longer, route back home. We took it.

Back in the plateau, Nanuq and I stopped only to look at a helicopter coming in for a landing on top of the mountain.

By the way Nanuq kept looking at them, I could tell he agreed. 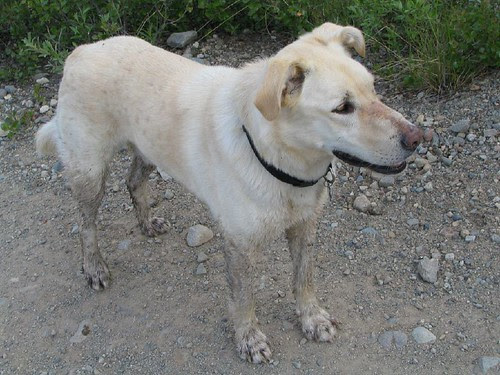 Nanuq, in his favourite outfit (mud and dirt).