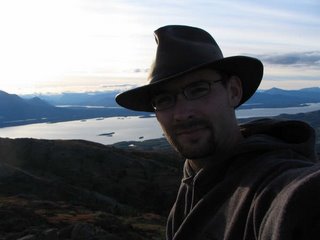 Welcome to the newest incarnation of Michael's Meanderings.

I've switched to Blogger because too many people have indicated that they would like to post comments, but MSN Spaces doesn't let them do so without a "Passport". The heck with passports. I think anybody who wants to wander should be allowed to.

The old Michael's Meanderings site is still accessible if you'd like to catch-up on what's been going on, and I will continue to use the photo album for mass picture uploads.

See you on (or off) the trail!

What the... I don't warrant a link on your sidebar anymore?? *sigh*

I must say that the reason I like MSN spaces is that a little * shows up on my MSN list when someone on my list has updated their space. It helps me avoid futile checking.

Nonetheless, I fully support your move and have contemplated making one of my own. Eventually.

Congratulations! You now warrant a link on the sidebar. I hope that it makes up for any futile blog checking that you may have to do.

Yay! That's much easier to comment now, even though I did have a passport, that damned MSN made it difficult.